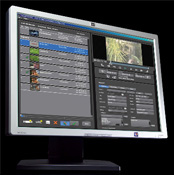 With growing needs to repurpose traditional news broadcasts for online and social media, TV stations are turning to tech companies like Grass Valley (left), Ross Video and Critical Media. They offer products to segment newscasts into clips, either as part of news production automation systems or as stand-alone products.

Recognizing broadcasters’ desire to turn mobile and online video into steady profit-making businesses, leading technology vendors have developed tools aimed at taking some of the cost and labor out of converting live broadcast newscasts into a series of clips suitable for the new media.

Grass Valley and Ross Video have long offered options for their news production automation systems that slice and dice newscasts into clips, and they now also have stand-alone solutions that they say are up to the task.

Meanwhile, Critical Media has an entirely different approach that not only yields the desired clips, but also provides a platform for syndicating the clips to others.

Three years ago, Grass Valley was among the first to recognize the importance of segmenting newscasts for distribution on new media. It introduced MediaFUSE as an add-on to its Ignite news production automation system, software that allows stations to pre-program all the director’s calls that go into a live newscast.

Then about 18 months ago, Grass Valley began offering a system independent of Ignite.

“Some people don’t want to pay for a full system,” says Eric DuFosse, VP of solutions for Grass Valley. “We understand that. We needed the capability to provide an open architecture to interface with a third party.”

MediaFUSE FX, which sells for $40,000, gives broadcasters more flexibility to package alternative content, DuFosse says. “You can take a long file and trim segments and with a simple drag and drop you can have automated publishing functions.”

After manual segmentation, the user decides how to configure the transcoding of the clip, he says.

“You can move a clip to a file to a specific folder where rules will be applied about its content — about its transformation to multiple formats, but also the capability to attach metadata and picture icons and even to have pre-roll or post-roll commercials.”

By the end of the year, Grass Valley will provide MediaFUSE functionality in its Stratus media workflow platform, which integrates ingest, application asset management, editing and playout applications.

“Today, most of the solutions offer a repurposing engine which are relatively complex and limited, as they need to manipulate content after the production and linear playout process with composite content,” DuFosse says.

MediaFUSE integrated with Stratus “will provide a complete workflow with the capability to create and package rich media components early in the creation process to facilitate linear program distribution as also non-linear publishing.”

Ross Video has been offering QuickTurn as a multiplatform option to its OverDrive news automation system since last year.

“By being tied to OverDrive, you can accurately segment the newscast” without re-editing and reformatting, says Ross Video’s Allan Pepper.  “The single biggest [benefit] is time. The QuickTurn system can automatically create the file as the show is running, which means the material is published to the Web significantly sooner.”

“QuickTurn is an interface that OverDrive uses to control a Web encoder,” Pepper explains. The interface allows the user to tag stories within a running order for reuse on the Web. The encoder is told to start recording, stop recording and what to name the recording by these tags. The result is “pieces of a show that can be posted to the Web,” he says.

Ross now has only a few QuickTurn clients, including CKWS Kingston, Ont., and WRGB Schenectady, N.Y.

The interface software is critical, Pepper says. “Each encoding platform has different capabilities, formats and a unique control scheme. This creates a development bottleneck since writing a control for each encoder takes time.”

To help, Ross struck a deal with Digital Rapids last fall and is looking to build alliances with other encoder vendors.

The software gives producers and reporters in the newsroom complete and immediate control over the content.

Inception goes a step beyond QuickTurn. “QuickTurn only generates the files themselves,” says Pepper. “It still requires the individual to go through and publish out to the end site. Inception takes care of the publishing for a more fully-integrated solution.”

Unlike QuickTurn, Inception can be used independently of OverDrive.

QuickTurn lists for $12,000. Inception’s price ranges between $5,000 and around $25,000, depending on how many users have access to it and how many social media accounts the users have.

With Syndicaster, Critical Media has strived for simplicity. “We look for really simple ways to do things for our broadcasters without a massive amount of hardware,” says Critical Media CEO Sean Morgan.

Syndicaster lets stations quickly chop up live newscasts into their discrete segments with a unique method. A built-in voice recognition system reproduces on-air narration as text, which serves to pinpoint segment starts and stops and acts as metadata for searches.

Syndicaster is in widespread use. Nearly 30% of news-producing station in the U.S. — including affiliates with the E.W. Scripps Co., Journal Communications and Newport Television — are customers, Morgan said.

Through Syndicaster, broadcasters also benefit from Critical Media’s ClipSyndicate video syndication platform,  where they can syndicate news clips to other broadcasters and websites.

“A robust system [like Grass Valley’s MediaFUSE] is very costly, but what it’s not doing is helping these broadcasters create content,” says Morgan. “They’re really good for taking something on the 5 p.m. news and forcing it on the website, but if that’s all they’re thinking about. They’re not thinking about growth and scale.”