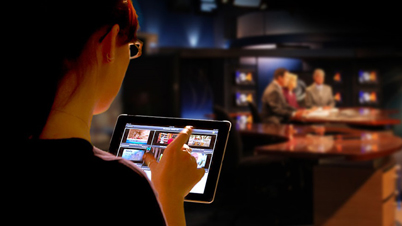 TV journalists can look forward to seeing the latest solutions to their newsgathering and distribution challenges at the NAB Show. Among the trends to be on display on the exhibit floor are story-centric workflow, greater collaboration and content sharing — both within the station and among stations — and extending the reach of the systems to reporters in the field. For a resources guide to the companies mentioned in this story, click here. Read all the 2016 NAB Hot Topics stories here.

Television news is in transition — a whole lot of transition — and the newsroom computer systems (NRCS) that broadcasters will find on the exhibit floor of the 2016 NAB Show, April 18-21 in Las Vegas, will reflect the best efforts of vendors to provide the tools needed to remain relevant, trusted sources of news.

Three factors are contributing to major changes in TV news: the need to deliver news product to a variety of platforms, not just the big screen; consolidation in station ownership, which is creating new opportunities to leverage news resources groupwide; and IP connectivity that makes it possible to put more TV reporters on the street.

Newsroom computer systems vendors at the NAB Show will address each.

The days when the sole responsibility of local and network television newsrooms was putting together newscasts exclusively for air are long gone.

As a result, TV broadcasters need to be on those platforms offering news content and encouraging viewers to tune in to their on-air newscasts for more in-depth coverage.

The problem is, the tool reporters and news producers are accustomed to using to write their TV scripts, edit clips and manage news sources originally was designed to build newscast rundowns.

To meet the changing demands for content creation brought on by the multitude of alternatives viewers have, a patchwork of content creation tools for different social media sites, the Web and mobile have been glommed onto the NRCS core.

“When we first created Inception, a very consistent complaint we heard from journalists and producers was: ‘I have too many windows and tabs open,’ ” says Jenn Jarvis, marketing product manager for Inception/Streamline at Ross Video.

Not only does that mean the inconvenience of jumping from one tool to the next to create news for different consumer platforms — each with its own unique quirks and separate log-in — but it also creates pushback from stressed out reporters focused on creating TV news, she says.

The solution newsroom computer system vendors have adopted is to put the story — rather than a newscast rundown — at the center of the process. As journalists begin creating news, they can access the elements they need  —scripts, video clips and graphics — seamlessly from within the NRCS user interface and build stories for different delivery platforms without the hassle and confusion.

Any transcoding or formatting required by a specific distribution platform happens in the background, transparent to the journalist. At the NAB Show, most NRCS vendors will feature this type of functionality.

“Multiplatform production, or what some people call a story-centric workflow, is absolutely one of the hottest areas in newsroom computer systems right now,” says Jason Smith, director of product design for AP’s ENPS.

By eliminating the need to jump between different tools to create news content for different platforms, the NRCS allows journalists “to tell the best story they can without having to worry about all these different tools,” he says.

For example, reporters using the Octopus newsroom system simply highlight a portion of their story, right click their mouse to select where they want to publish it and an interface opens up to allow them to tweak the item for the chosen delivery platform, says Gabriel Janko, company sales director.

“Of course, all of the associated media, such as video clips, will be there in the folder so they can simply choose them,” he says.

However, providing access to the tools needed to create news for delivery across different platforms from within the NRCS interface is only part of the story, says Joe Trainor, business development, Annova Systems.

“They want to, through their own due diligence, decide what’s important and then use that in storytelling for whatever output they deem is relevant,” says Trainor. At the NAB Show, the company will demo that capability.

Octopus also will feature new social media tools. However, its approach is to allow journalists to track what is trending in their geographical location directly from the newsroom system.

The NAB Show also will serve as a venue for NRCS vendors to tout their latest advancements in collaborative news workflows — both on the individual station level and groupwide.

“There is more of an aggregation and consolidation of roles and responsibilities at stations,” says Pam Gill, Avid senior solutions marketing manager, broadcast and media. “We are developing tools that unify the whole process.”

Avid’s Media Central UX, or user experience, allows journalists and producers to access all of the content in their iNews newsroom computer as well as video assets in Avid’s Interplay at their own station and at sister stations, she says.

“In the past, sharing content was a long and painful process that took a lot of time and coordination to transfer footage,” says Gill. “Our approach centralizes and unifies this, making it so much more efficient to share resources and content.”

AP’s Smith echoes Gill’s view on content sharing. “That’s at the very heart of what ENPS has been from the beginning,” he says. “It was designed to allow for that level of cross-site collaboration using one system.”

At the NAB Show, AP will introduce new linking and tagging functions for ENPS, based on the enhanced use of metadata, to help journalists in any newsroom discover content “whether they know it exists or not,” he says.

Enabling greater collaboration in the newsroom and among the newsrooms of sister stations and news bureaus has been a part of Dalet’s Galaxy MAM since its launch, says Ben Davenport, Dalet director of marketing.

Breaking down silos that confined certain journalists to be a part of the TV news team, while others resided in silos responsible for the Web, social media and radio has been a major goal of centralizing access to all news resources via Galaxy MAM, he says.

While the system does just that, it hasn’t always been easy given the tendency of some journalists and technologists to see themselves through the limiting prism of the silo where they’ve worked, he explains.

“It’s a mindset change from being oriented on a linear process to one where everything branches out to various distribution platforms from a unified news production system,” he says.

To date, 3,000 journalists at 35 different media organizations have been able to make that shift in mindset using the Dalet Galaxy MAM, he says.

Broadcasters increasingly are asking NRCS vendors to extend the functions of their newsroom systems to the street where their reporters are gathering news.

“News doesn’t happen with reporters sitting inside the television station,” says Ross Video’s Jarvis. “It’s crucial that they have a tool that allows them to do what they need to do out in the field. When we limit how they are able to access the newsroom system, we limit how they create content.”

At the NAB Show, the company will highlight Inception’s browser-based interface that gives journalists access to all of the newsroom computer system’s tools from any computer connected to the Internet, she says.

Avid’s Gill concurs: “Giving reporters the tools to create stories when they are in the field — whether it’s scripts on an iPad or iPhone — keeping them in sync with everything going on back at the station, enabling them to edit video in the field, create a complete package and send it to air directly from their location is critical.”

At the NAB Show, Avid will highlight how iNews is supporting this type of remote functionality, she adds.

Most of the vendors interviewed for this NAB preview declined to offer many specifics about new enhancements to their newsroom computer systems, choosing instead to save them for the big reveal at the show.

Even Vizrt, which will introduce an entirely new product in this space called StoryTool declined to say much about it. “It is a way of creating a story, whether it stands as a single story or multiple stories, and it is targeted at an audience that does not have a newsroom computer or could have a newsroom computer,” says Isaac Hersly, the company’s chief partnership officer.

Regardless of this lack of detail, the overall trends in NRCS of a story-centric workflow, greater collaboration and content sharing — both within the station and among stations — and extending the reach of the systems to reporters in the field will be fully on display at the NAB Show.

Whether the vendors have hit the bull’s eye with their unique solutions will be for the TV news organizations attending the NAB Show to decide.