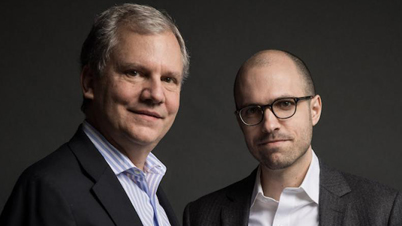 He transformed The Times into an international media company, and built one of the most successful digital pay models in news. Succeeding him is his son, current deputy publisher, A.G. Sulzberger (right), a principal architect of the company’s digital transformation.

The New York Times Co. said today that Arthur O. Sulzberger Jr. will retire as publisher on Dec. 31. He will continue to serve as chairman of the company’s board of directors, a position he has held since 1997.

Deputy Publisher A.G. Sulzberger, 37, will become publisher of The New York Times on Jan. 1, 2018. He is the son of Sulzberger Jr.

Robert E. Denham, the presiding director of the Times Co. board of directors, said: “Over his career, and in particular during this past year as deputy publisher, A.G. has displayed superb leadership skills. He asks smart questions, he challenges, he exercises excellent judgment and he makes things happen. His reputation as a fine journalist and digital strategist is well-earned. As publisher, Arthur has positioned The Times for future success and the board is confident that A.G. is the right person to succeed him.”

Sulzberger Jr. said: “It has been an extraordinary honor to serve as publisher of The New York Times and I will step down at the end of the year prouder than I have ever been of the strength, independence and integrity of this institution. My colleagues — the women and men who have devoted themselves to producing and distributing the world’s best journalism — have made my job so fulfilling and I am forever in their debt.”

He continued, “A.G. embodies the values and mission of The Times. He has proven himself to be a powerful force for change, deeply dedicated to moving the company forward as the pace of transformation in our business continues to speed up. I am completely confident that he — and his cousins who are working alongside him — will dedicate themselves to preserving the excellence at The Times that my family has been committed to for over 120 years.”

A.G. Sulzberger said: “Arthur is the only publisher of his generation who took over a great news organization and left it better than he found it. The fortunate position The Times enjoys today was not a foregone conclusion; it is a direct result of the bold bets Arthur made, from taking the paper national and then international, to embracing the Internet, to insisting that great journalism is worth paying for.”

He continued: “Original, independent, deeply-reported journalism is the fuel that powers a healthy and engaged society. My focus as publisher will be on ensuring the continued journalistic excellence and commercial success of The Times through a period of transformation for the news industry.”

In his quarter-century as publisher, Sulzberger, Jr. transformed The Times into an international, digital-first news organization with a global audience of more than 130 million people and 3.5 million paid subscriptions, more than The Times has ever had. Early in his tenure, he led the push to take the paper national and, in 1996, launched nytimes.com. Under his leadership, The Times won 60 Pulitzer Prizes, doubling the paper’s total Pulitzer count.

A.G. Sulzberger’s appointment was approved by the company’s board of directors on Dec. 14. He was also elected to the board and will fill the seat being vacated by Michael Golden, who is stepping down on Dec. 31.

A.G. Sulzberger was a reporter at The Providence Journal and The Oregonian before joining The Times’s metro desk in 2009. He later worked as a national correspondent, covering the Midwest as head of the Kansas City bureau.

He is a graduate of Brown University.

Arthur O. Sulzberger Jr. joined The Times in 1978 as a correspondent in its Washington bureau. He moved to New York as a metro reporter in 1981 and was appointed assistant metro editor later that year. From 1983 to 1987, he worked in a variety of business departments, including production and corporate planning. In January 1987, he was named assistant publisher and, a year later, deputy publisher, overseeing the news and business departments.

Before coming to The Times, Sulzberger Jr. was a reporter with The Raleigh (N.C.) Times from 1974 to 1976, and a London correspondent for The Associated Press from 1976 to 1978. He is a graduate of Tufts University.