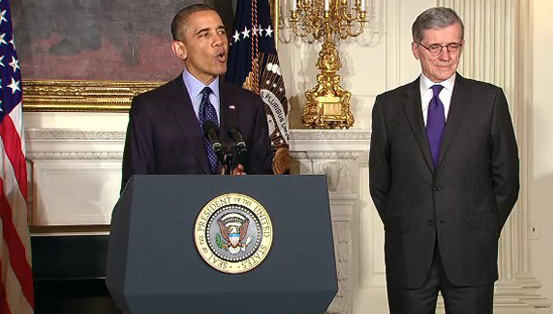 The former head of NCTA and CTIA is nominated to succeed Julius Genachowski as FCC chairman. In a historic first, the president taps FCC Commissioner Mignon Clyburn to be acting chair until Wheeler is confirmed by the Senate, making her the commission's first African-American chair.

President Barack Obama made it official today: Tom Wheeler, the former head lobbyist for the cable TV and the wireless industries, is his pick to be the FCC’s new chairman.

At the same time, the president announced that Mignon Clyburn, the FCC’s senior Democrat, will serve as the acting chair until Wheeler is confirmed.

“Together they’ve got a very important mission: giving businesses and workers the tools they need to compete in the 21st century economy and making sure we’re staying at the cutting edge of an industry that again and again we’ve revolutionized here in America,” the president said in a White House briefing.

“Now, if anybody is wondering about Tom’s qualifications, Tom is the only member of both the cable television and the wireless industry hall of fame,” the president said. “So he’s like the Jim Brown of telecom, or the Bo Jackson of telecom. And that’s because for more than 30 years, Tom has been at the forefront of some of the very dramatic changes that we’ve seen in the way we communicate and how we live our lives.

“He was one of the leaders of a company that helped create thousands of good, high-tech jobs. He’s in charge of the group that advises the FCC on the latest technology issues.  He’s helped give American consumers more choices and better products. So Tom knows this stuff inside and out.”

Wheeler, a major fundraiser for Obama’s 2012 re-election campaign, is expected to take over the reins of the agency as soon as he can win Senate confirmation for the post.

Julius Genachowski, the FCC’s current chairman, announced his planned resignation in March. He said today he expects to leave the agency “in mid-May.”

Clyburn’s appointment will go into the agency’s history book because she will be the agency’s first female chair. Sources say she could serve as the agency’s chair for several months or more while Wheeler awaits Senate confirmation.

Sources also say that Wheeler’s confirmation is expected to be put on hold until the White House names a Republican to succeed GOP Commissioner Robert McDowell, who also announced his resignation from the agency in March. The leading GOP candidate, according to industry sources, is Michael O‘Rielly, a top adviser to Sen. John Cornyn (R-Texas). Other GOP candidates said to have their hats in the ring include Ray Baum, senior policy adviser to Rep. Greg Walden, R-Ore., and A.B Cruz III, a rear admiral in the U.S. Navy Reserve who previously worked for Scripps Networks Interactive Inc. and as an attorney for Wiley Rein LLP.

Senate Democrats and Republicans are likely to insist that Wheeler and the GOP FCC candidate be moved together in a package deal, sources say. So Wheeler may have to wait until Senate Republicans and the White House agree on the naming of a Republican FCC nominee, with Senate Republican Leader Mitch McConnell (R-Ky.), expected to have considerable say over the selection.

According to some industry sources, it could take months for the new commissioners to get on board because potential nominees need to go through a vetting process that can be particularly time-consuming for prospective candidates who are not already working for the government.

One question unanswered at deadline was how Senate Commerce Committee Chairman Jay Rockefeller (D-W.Va.) will react to the news that the White House tapped Wheeler as its pick for the chairman’s post. Rockefeller had made clear that he wanted his former aide — FCC Commissioner Jessica Rosenworcel — promoted to the agency’s chairmanship. The Senate Commerce Committee presides over confirmation hearings for FCC nominees.

Reaction to Wheeler’s and Clyburn’s nominations came swiftly. NAB President Gordon Smith said the nominee has “the experience and temperament to serve the agency with distinction.” And he added, “NAB salutes President Obama’s historic selection of Mignon Clyburn as acting chair of the FCC. Commissioner Clyburn is a trailblazer and role model for millions of women, and her commitment to serving the public interest is unquestioned.”

NCTA President-CEO Michael Powell said: “With his significant experience in both the private and public sector, Tom [Wheeler] is an exceptional choice to lead the commission during a time when the telecommunications marketplace is experiencing significant innovation and incredible change. We welcome the pending appointment of Mignon Clyburn as interim chairman as she is a distinguished and able public servant.”

American Cable Association CEO Matthew M. Polka said: “The American Cable Association is heartened that the President has nominated someone as competent as Tom Wheeler to be Chairman of the Federal Communications Commission. He has spent his career in the communications industry — running a company that invests in new entrants in the high-tech field, representing vital industry sectors and serving on government panels. At a time when the communications sector has so many opportunities and faces so many challenges, the FCC needs someone that is both capable and qualified. Mr. Wheeler is the right person for the job.”

President of the National Cable Television Association and major fundraiser for Obama’s re-election? Is this an example of paying to play? A lobbyist and fund raiser becoming Chairman? I hope he can remain objective and neutral on issues affecting the telecommunications industry. Odds?

Broadcasters who care about their industry and the public interest — and the key role played by broadcast media in maintaining a free and open society — must unite to defeat this nomination in Congress. Tom Wheeler is not a bad man, but his “pay to play (or view)” philosophy is antithetical to public interest. A leopard can’t change his spots. Congress must not allow Tom Wheeler to become the FCC chairman.

So much for free

So Julius is leaving mid-May? “Well, don’t let the door….on second thought, let the door hit you on the way out.” He won’t be missed (except by dubious characters like Gary Shapiro). I was kind of hoping that the next Republican commissioner would come from Texas. Texas probably has the largest number of broadcasting facilities of any state and, as such, broadcasters are still valued there. We need someone who will continue the fine work Robert McDowell did–someone who will stick up for broadcasters instead of sticking us in the back.

I’ve known Tom since his days at NCTA and throughout that time he has never shown himself to be anything other than intelligent, honest, fair, and openminded. While he will take a position, like any good leader, it has always been after, not before, having heard all sides who wish to speak to the issue. Being committed to the political process should not be a disqualification. This is not Pay to Play. Tom has served well and fairly as co-chair of a State Dept. Advisory Committee. We have had a commissioner who came from industry before and he was an excellent and fair regulator. We can expect the same from Tom Wheeler.

Here is the problem I have with Wheeler. In several of his blogs he repeats the ignorant canard that broadcasters were “given” their spectrum or licenses, implying that it is free. Nothing could be further from the truth. In most cases, broadcasters have paid hundreds of thousands if not millions of dollars for their channels at auction. On top of that, they have these burdensome and archaic public interest obligations to fulfill and keep on file for FCC (and public) inspection–obligations that wireless providers don’t even have to give one thought to as they happily plan their business expansion. No, Wheeler needs to be educated about the broadcasting business and its history before I will consider him truly qualified to run the Commission.