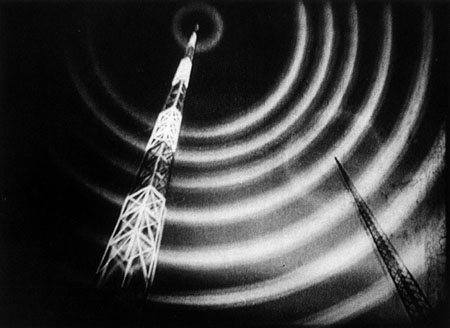 Many U.S. broadcasters view the adoption of the digital encoding scheme as crucial to the new ATSC 3.0 standard. They say it's the best bet for stations to deliver strong, robust signals for reception not only on big-screen TVs with indoor antennas, but also smartphones, tablets and other mobile devices. An OFDM-based standard, they say, would facilitate a TV station's ability to "cellularize" its broadcasting system — that is, supplement its main transmitter and antenna with several strategically located booster stations broadcasting on the same frequencies.

This year’s International Consumer Electronics Show in Las Vegas was the site of what appears to have been the first public broadcast of 4K Ultra HD television in the United States.

In its booth, Samsung showed 4K Ultra HD television transmitted from a low-power TV transmitter on Black Mountain south of the city.

To pull off the feat, the company contracted with Acrodyne Services, a wholly-owned subsidiary of the Sinclair Broadcast Group, to modify the low-power transmitter by replacing its ATSC exciter with a DVB-T2 exciter.

“The transmitter was around 15kW ERP running DVB-T2 in 4K mode at around 30Mb/s,” says Andy Whiteside, general manager of Acrodyne Services. “They put up an antenna at the convention center and demonstrated a five-minute loop of 4K television with its big, beautiful pictures.”

Besides giving Samsung the chance to show off its latest Ultra HD displays, the OTA transmission of 4K also demonstrated how OFDM, the digital data encoding scheme at the heart of DVB-T2, could one day play a starring role in U.S. television broadcasting.

Most of the proposals for the physical layer of ATSC 3.0, the next-generation over-the-air television standard currently under development by the Advanced Television Systems Committee, are OFDM-based.

Around the world, digital terrestrial television standards based on OFDM already are widely used. DVB-T and DVB-T2 have been adopted and deployed in more than 140 countries, and ISDB-T and ISDB-Tb are used in at least 16 countries, including Japan and Brazil.

U.S. broadcasters, too, have gained a wealth of experience with OFDM since transitioning ENG microwave to seven digital channels that use COFDM data encoding, a type of OFDM that includes forward error correction.

Proponents of an OFDM-based broadcast standard say it’s the best bet for delivering strong, robust signals for reception not only on big-screen TVs with indoor antennas, but also smartphones, tablets and other mobile devices.

An OFDM-based standard, they say, would facilitate a TV station’s ability to “cellularize” its broadcasting system — that is, supplement its main transmitter and antenna with several strategically located booster stations broadcasting on the same frequencies.

OFDM and so-called single-frequency networks (SFNs) were made for each other, says Merrill Weiss, an engineering consultant and founder of the Merrill Weiss Group. “It can help to make it easier to avoid interference between transmitters.”

Unlike the underlying approach of today’s ATSC standard, OFDM encodes digital data onto multiple carriers to deliver many parallel data streams. One important advantage of OFDM for broadcasters is its ability to resist fading that results from multipath interference.

“An OFDM-based SFN offers the added benefit of the cyclic prefix guard band, which reduces the negative effect of causing on-channel self-interference to receivers, and in turn brings the transmitter closer to the consumer location, thereby increasing the field strength at the receiver and increasing the probability of successful reception,” says Winston Caldwell, VP, spectrum engineering, advanced technology for Fox Networks’ Engineering & Operations.

Jay Adrick, a former VP at Harris and now an independent consultation, says broadcasters could build SFNs with today’s ATSC standard, but they would be less than satisfactory.

“You are always going to have a very narrow zone of interference that’s going to be somewhere between the emitting stations, a place where the signal levels and the time arrives on an unequal basis based on the transmit points and the receiver,” he says.

With OFDM, the problems with interference in such zones are alleviated, he says.

Deploying an OFDM-based SFN transmission scheme would not force broadcasters to discard their existing transmission system and start from scratch, Adrick says. They would just have to add the booster stations at the edge of the main signal’s contour.

“These booster stations are synchronized so they are SFN. They are fed with an STL (studio-to-transmitter link), not an off-air repeater, and they are feeding directional antennas, probably 120 degree beam width around that vicinity,” he says. This approach would allow broadcasters to strengthen their coverage at the edges of their contour.

As a result of the multiple transmitters, there will multiple signals coming from multiple directions reaching receivers he says. This directional diversity will increase the opportunities a television signal has to get into a building because there will be more entry points, such as windows.

“It is a type of diversity system that will dramatically increase the availability of signals with indoor antennas. So, indoor reception will increase dramatically as will mobile reception because overall average signal levels will be much higher,” Adrick says.

On the downside, however, is the cost of deploying, powering and maintaining a single frequency network of multiple transmitters, he says.

One way to offset the added expense would be for broadcasters to share SFN transmitter sites, he says.

“For each SFN site, picture a smaller building where each broadcaster in the market has a transmitter, feeding a combiner, feeding one transmission line, feeding one directional broadband antenna. That way you end up with a lower-cost deployment rather than having a bunch of towers to build.”

Eventually, broadcasters may even choose to co-locate their main antennas in the center of their coverage areas, he adds.

While not certain, the odds appear good that the ATSC 3.0 standard for a next-generation digital transmission system will be based on OFDM, given the overwhelming support it garnered among those submitting proposals for the standard’s physical layer.

ATSC has set up an aggressive timetable to make ATSC 3.0 a reality with a candidate standard for members to consider being available in spring 2015 and a vote on whether to adopt the standard in the first quarter of 2016, says ATSC President Mark Richer.

Once adopted as a standard, ATSC 3.0 would be ready for the FCC to consider for rulemaking. Alternately, broadcasters who forego accepting compensation from the fund set up to reimburse the expenses they will incur as part of an FCC-mandated spectrum repack by law have the right to seek a flexible spectrum use waiver from the agency, which could expedite rollout of ATSC 3.0.

So far, the FCC has said that it will not wait for the rollout of ATSC 3.0 before initiating the auction and repacking. Repacking with a new, spectrum efficient standard would be the optimum and really the correct scenario. Anything else would be an Obamacare-like disaster for broadcasters.

One good and one bad. Multicasting / simulcasting a digital signal is a disaster – case and point with a 12 tower simulcast on the 800MHz band for our county sheriff – it causes a $500 scanner to crash and burn as it can’t decide which transmitter signal to stay with. The good is the use of OFDM – SirusXM added several channels to their existing spectrum by the use of ortho broadcasting from their birds. If the TV stations used the SXM version of dual transmitters, one delayed and the receiver putting the two signals back together, then that would work better than a simulcast, IMO.

The missing link is the viewer and will they be willing to invest in replacement TV’s that have ATSC 8 VSB and OFDM tuners.Me thinks not another 3-D TV and 4K debacle. As my long time friend Jay points out ATSC 8 VSB SFN transmission is possible today thanks to work done by another friend S. Merrill Weiss years ago.

I’m of the opinion broadcasters need to SWAT (Sell Whats Available Today) rather than re-invent a wheel that has the potential of coming off the wagon should the Cable folks get their wish now being floated of making OTA the first Al La Carte test subject. Comcast is already breaking out re-transmission fees; DirectTV is working on incorporating an OTA antenna into their equipment system and Aero has a good chance of winning their case.

Les Moonves stated today he expects CBS to receive $2 billion from retransmission consent agreements with cable and satellite operators and from reverse compensation deals with network affiliates it does not own.
by 2017 and that folks is just 1 network and excludes cost increases from traditional cable networks in an economy that is on life support.

There is already a movement by people to cut their cords due to never ending increases using internet with Smart TV’s or retrofit add on for their TV and so forth. In my book use what you have and take heed on the suggestion of site sharing for the translator transmitters and promote and capitalize on what people can afford plus push your secondary sub-channels that people who only have cable or satellite receivers have no clue exist so why bother with reinventing a SFN modulation scheme and programming your sub-channels if the underlying plan is to set back waiting to rake in retransmission fees while your golden goose cable/satellite providers are looking at ways to loosen the wheels on the broadcasters wagon.

OFDM is a better scheme as was PAL over NTSC a scheme that won out because people could use their existing B/W TV sets. That is even more important today with an economy that’s stalled leaving people with hard choices on what they can afford, food, roof, car, gas, internet, insurance or like our debt ceiling sky is the limit pay TV .

I believe the plan is to create a HDMI plug in tuner, similar to the small USB tuners now (for ATSC). This way TV’s could receive both forms of modulation and not have to replace the TV.