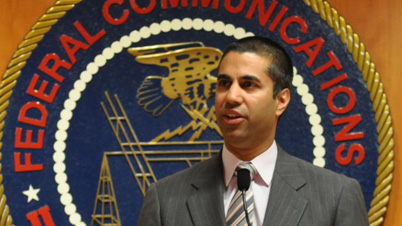 The FCC chairman says his approach to broadcast regulations is “You either believe in scrapping outdated regulations or you don’t. We do.” And he thanks broadcasters for their support, especially during the controversy over net neutrality which resulted in death threats.

LAS VEGAS — For the most part, FCC Chairman Ajit Pai’s speech Tuesday to broadcasters at the NAB Show was standard fare — some pats on the back for the broadcasters and a recitation of FCC actions that he believes will help them compete more effectively.

But at the end, Pai went off script and displayed some emotion in thanking broadcasters for their personal support during some of the “challenges” he has faced during his 15 months as chairman.

He didn’t specify the challenges, but they would include, above all, death threats that he received after he led the FCC in eliminating the net neutrality rules late last year. Those threats caused him to cancel his appearance at the Consumer Electronics Show in January.

In introducing Pai, NAB President Gordon Smith made reference to the threats, noting that it is “not easy for Pai to travel.”

Pai said he knew from former FCC chairmen that the job was one of the toughest in Washington. “It’s also something I’ve learned firsthand.”

And for him, he said, the “challenges have … spilled outside the FCC and it is in that regard that I want to extend my thanks to you — the folks in this room.”

“I do want … to let you know that … I very much cherish your statements, emails, tweets … personal conversations when I see you in the hallways, and for your thoughts and prayers from afar. They mean more than you know.

“So, on behalf of myself, the Pai family, I want to express my heartfelt gratitude to you. Thank you for being there for me and for us when it counted. I’ll never forget it.”

In terms of the standard fare, Pai said his initiative to eliminate unnecessary broadcast rules, which he announced at last year’s NAB Show, has so far yielded eight rulemakings and there are more to come.

“In particular, Commissioner [Michael] O’Rielly is now leading an effort to update our children’s television rules so that they better reflect the way that kids watch video these days, and I look forward to getting his recommendations.”

On Monday, O’Rielly told a group of broadcasters he would like to get rid of the current rule requiring TV stations to air three hours of children’s programming in the form of 30-minute shows each week between 7 and 10 a.m.

Pai said he approaches broadcast regulation as a series of choices. In the review of the FCC regs, it was: “You either believe in scrapping outdated regulations or you don’t.”

“You either believe broadcasters should be allowed to innovate, or you don’t.  And we do.

“So last November, the FCC adopted rules authorizing the Next Gen TV transmission standard. Unfortunately, we ran up against some resistance. Some demanded that we strangle Next Gen TV in its infancy with extensive regulation — regulation they’d never think of foisting on video services from Silicon Valley giants.

“They stoked false fears about losing signals and having to buy new equipment. Fortunately, the FCC rejected this shameful attempt to block progress. I look forward to seeing the consumer benefits from this new technology in the time to come.

“You either believe in rules that match the modern marketplace, or you don’t.  And we do.

“So last year, we also approved a long-overdue update to our media ownership rules. One of them was ending the newspaper-broadcast cross-ownership ban — a ban that was adopted in 1975.

“With the proliferation of online news sources, cable TV and more, the idea that a company could dominate a media market by owning a broadcast station and a newspaper is utter nonsense.

“You either believe in extending broadcast service to more communities, or you don’t.  And we do.

Pai also patted himself on the back for helping broadcasters secure an additional $1 billion from Congress to insure that they will be fully reimbursed for moving to new channels in the wake of the FCC incentive auction.

Why could the democratically controlled Obama FCC not see the need for these common sense changes? Wheeler literally tried to suck the life out of broadcasters and support the Googles of the world on a daily basis. Is it because local TV didn’t support the national media liberal bias which kept his team in office? These changes that Pai has made just seem too much common sense to wait this long to make. Unless there was an agenda in the previous 8 year reign.

While much of what the FCC has done under Pai’s Chairmanship, at least with respect to broadcast regulation, involves getting rid of or modifying some outdated regulations, in one area he has done quite the opposite -the UHF discount. It too is highly outdated since the conversion to DTV, yet he reinstated that rule after its prior elimination. The other question that has to be asked is how much deregulation is in the public interest. The public interest involves more than just an economic analysis. For example, is great consolidation of radio stations in a single market really in the public interest? That’s something that is apparently getting teed up according to articles in the past few days. What would such further consolidation do to those individual or duopoly station owners that already have a difficult time competing? Do we really want a situation where it’s incredibly difficult for a stand alone, or duopoly radio station ownership to survive? Some of what the FCC has done thus far was relatively easy (obviously out-dated regs), and some may have gone too far (complete elimination of local studio requirements), but some of the new proposals may be harder to justify from a public interest perspective (as opposed to an economic ideology that disfavors regulation).

Thank you for your comments. Reinstating the UHF discount had nothing to do with elimination of outdated rules: it was clearly aimed at allowing Sinclair to facilitate acquisition of Tribune without having to divest itself of its current portfolio of licenses. All about picking partisan winners.

I agree martelxo92 with one exception. Many of the rules the Chairman brings up are overdue for overhaul. But I fail to see the wisdom of screaming full speed ahead on net neutrality. The only result that I can see is concerning with significant harm not in the public or industry best interests. Not saying the current rules are perfect but they provide some safeguards against internet abuse by corporations who need to off set revenue lost to cord cutting by replacing that with tiered pricing for the speed and circumference of the pipe. Just as many of those same corporations became the ultimate gate keeper with their control of local station and cable network availability, their plan to be the online gate keeper of the one service everyone who wants a video service provided in a manner other than over the air is just too obvious to overlook. This just does not seem a wise move for consumers or content providers not associated with the larger internet conglomerates. Just sayin’

Outdated regs needed changed. Obviously Pai’s Chairmanship is a friend to consolidation which leads to all the “sky is falling” with Sinclair. How do you push for consolidation without wiping the small broadcaster?

Without consolidation there will be no local broadcasting. None worth watching anyway. It takes resources to properly cover a market’s events. You can’t do that if you are worried about keeping the power from being disconnected. New market forces (technology) has put broadcasters in a position to either get big or go away. Market forces are driving this. If you want all the tools of broadcast you have to pay for them. You can’t pay for them with a local plumber buying $10 rotators. And it you don’t give them rotators they will just go digital or cable or another medium. I can tell you this, without the addition of retrans in the past decade your local TV news reports would resemble newspaper coverage. Two stories and a ton of editorials and national stories. At least the entire A block is still real local events until they jump into the regional or national stories.

PaiD says: “You either believe in scrapping outdated regulations or you don’t. We do.” And then reinstates the UHF Discount…too hilarious…

I’m all for updating regs and getting rid of old ones, but when you’re moving heaven and Earth to allow the biggest merger for two broadcast groups, that’s where you lose me. It not just about Sinclair, either. I’m sure they’ve greased his palms and others to make it happen. And with them being behind the development of ATSC 3.0, which may have also played a part in this, we’re all going to be giving Sinclair money when we’re eventually forced to upgrade.