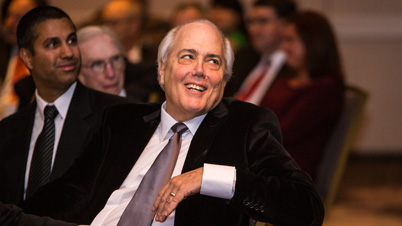 He’s spent 34 years as president and CEO of the nonprofit organization with three guiding principles: a strong First Amendment, a competitive communications industry and excellence in journalism. He will be succeeded by Media Institute Executive Director Richard T. Kaplar.

Patrick D. Maines, who has headed The Media Institute amid successive waves of technological innovation in a media world radically transformed by corporate restructuring, consolidation and competition, and who remained true to the principles of free speech and a market-driven communications industry, will retire on Jan. 2, 2018.

Maines’s retirement was officially acknowledged by the Institute’s Board of Trustees at its annual meeting today. In recognition of his long and distinguished service dating from the early 1980s, the board bestowed upon Maines the title of President Emeritus.

Maines will be succeeded by Media Institute Executive Director Richard T. Kaplar. Communications attorney and former FCC chairman Richard E. Wiley will continue as Chairman of the Board.

Maines joined The Media Institute in 1980 following careers in corporate public affairs and publishing in New York City. He became president and CEO in 1983, a position he would hold for 34 years. He is only the second president in the history of the nonprofit organization, founded in 1979.

During his tenure, Maines designed and directed all of the Institute’s program activities. In addition, he formulated the Institute’s policy positions on a wide array of issues including competition and concentration, emerging technologies, intellectual property, media content and ownership, and structural regulation of the electronic media.

Under Maines’s leadership, The Media Institute became a leading voice in support of three guiding principles: a strong First Amendment, a competitive communications industry and excellence in journalism.  In 2005 the Institute launched National Freedom of Speech Week, the first-ever commemorative week in honor of free speech.  It has been called Free Speech Week since 2011.

“For over three decades, Patrick Maines has been the indispensable man for The Media Institute.  His visionary policy leadership and his hands-on managerial prowess have been the driving forces in the Institute’s continuing success,” said Board Chairman Dick Wiley.

In recent years Maines has been a regular contributor to the Institute’s Media & Communications Policy blog, where he has shared his often-outspoken opinions on the policy issues, personalities, and politics surrounding the media industry. His articles have appeared frequently in The Hill, Politico, USA Today, Daily Caller and other outlets.