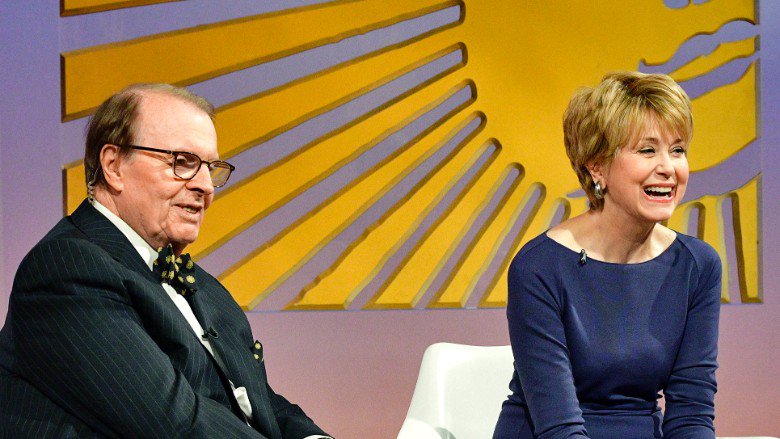 Jane Pauley will take over for Charles Osgood as anchor of CBS Sunday Morning beginning with the show's next broadcast on Oct. 9. The news was announced Sunday morning at the end of the show's special tribute to the retiring Osgood.

Pauley will succeed Charles Osgood as anchor. Osgood is retiring from the series on September 25, after 22 years as anchor of the award-winning broadcast, and after 45 years at CBS News.

Pauley’s first broadcast in the new role will be Oct. 9, when she’ll become only the third anchor in the history of Sunday Morning.

Pauley joined Sunday Morning in 2014 as a contributor. Since then she’s been a substitute host and has delivered a steady stream of high-profile interviews and reporting to the broadcast.

“Charles Osgood set the standard for CBS Sunday Morning,” Pauley said. “And it’s a great honor to be given the chance to further our show’s legacy of excellence. I look forward to bringing loyal viewers the kind of engaging, original reporting that has made the broadcast so irresistible for so long.”

“Jane Pauley is the ideal host for the most wide-ranging news program on American culture, our beloved ‘CBS Sunday Morning’ broadcast,” said Rhodes. “Charles Osgood is a television news legend — and so is Jane Pauley.”

“We first got to know Jane when we did a story about her on ‘Sunday Morning,’” said Rand Morrison, executive producer of Sunday Morning.  “Our viewers immediately responded by suggesting she belonged on Sunday Morning permanently. And, as is so often the case, they were right.  She’s a dedicated, experienced broadcast journalist.  But — every bit as important — she’s a delight to work with.  A worthy successor, and a perfect fit.”

I beg your pardon. Charles Kuralt set the standard for “CBS Sunday Morning. Guess you don’t get the demographic you want by mentioning someone from Murrow, Cronkite and the Golden Age of Television News. While I know Jane personally and wish her well, to set the record straight and mention the unmentionable, CHARLES KURALT set the standard for that show.

Excuse me, but I’d say there is no demographic difference between Kuralt and Osgood? your first point is right. Kuralt set the standard; Osgood was a good fit. So too is Pauley,. But anyone over 49, or 55+ is pretty much in the same demo group. Now excuse me, I have to leave or I’ll miss my streetcar.

Charles Kuralt was a serial philanderer with a honey in every city “on the road.” No less a sex addict than Cosby or Clinton. http://www.salon.com/1999/06/08/kuralt/

Correction: He mostly cheated with one woman, but the article doesn’t mention the others.