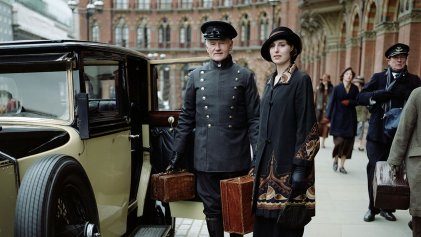 The return of Downton Abbey, which began its fourth season on Jan. 5, is becoming a post-holiday tradition for the show's fans, said Paula Kerger, PBS president. The British series began presenting new episodes in late September back home, but PBS holds it back.

PASADENA, Calif. (AP) – Despite some fans eager to see it earlier, “Downton Abbey” will continue to begin its new seasons on PBS in January, the system’s chief executive said Monday.

The return of “Downton Abbey,” which began its fourth season on Jan. 5, is becoming a post-holiday tradition for the show’s fans, said Paula Kerger, PBS president. The British series began presenting new episodes in late September back home, but PBS holds it back. The drama had more than 10 million viewers for its fourth-season debut, and the episode was streamed online 1 million times during the following week, she said.

“It would be very hard for me to imagine putting it anywhere else than where it has seemed to have found a very strong audience,” she said.

Public broadcasters are open to experimenting with different ways of distribution, however. Some PBS stations have tried showing programs online before they appear on television, she said.

Although time-shifting and the availability of episodes online has made television viewing a vastly different experience, Kerger said a lot of people look forward to watching episodes when they first appear on TV as a communal event, getting together with friends and commenting about the show on social media.

“People I think are hungering for something that really ties it all together,” she said.

PBS is experimenting with a shorter delay for the “Sherlock” series, responding to the pleas of fervent fans. The show’s new season began in Britain on New Year’s Day and this past Sunday on PBS.

“We can’t expect a show to go out in one country and expect people in another country to wait more than a day. The world has changed utterly,” Moffat said in an interview. “We’re going to be downloading all our television very, very soon, so the idea you have to wait is nonsense.”

“It breaks my heart that this hit show, appreciated worldwide as it is, is not delivered worldwide at the same time. And it’s possible,” he said, if PBS and the BBC would coordinate the U.S.-U.K. airings.

Not doing so is a slight to the show’s “communities of fans,” Cumberbatch said.

PBS said it is picking up a British sitcom, “Vicious,” for its Sunday night schedule, due to premiere on July 6. It stars Ian McKellen and Derek Jacobi as two gay men in a long-term relationship who bicker continuously but put up a united front against the world.

PBS is just encouraging Piracy and cutting into it’s own audience. But of course, when CPB was given $400M last week by the US Government, do they really care?