Picture This: Graphics Move Beyond Quality 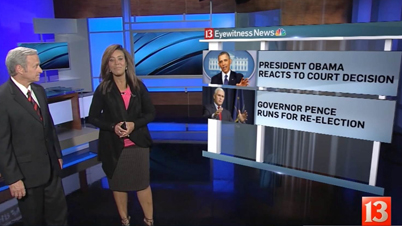 The graphics systems broadcasters rely on daily to make news, sports and weather reports more appealing and informative have advanced quite far — so much so that quality has become a given. To differentiate themselves, vendors now are focusing on the finer points like tighter workflow integration. But that’s just one of the many trends broadcasters can expect in graphics systems on the exhibit floor at the 2017 NAB Show. (Ross Video photo) Click here to access TVNewsCheck’s NAB 2017 Resource Guide listing of broadcast graphics vendors and products, or here to download it as a PDF.

Broadcast graphics systems today are more than capable of creating the quality of visuals needed to meet the demands of storytelling in TV news, sports and weather, so vendors have turned their attention to other ways to make their systems more useful to broadcasters.

“There are no technical limitations anymore. The GPUs, the CPUs of the computers, have incredible power,” says Jesper Gawell, CMO of ChyronHego, which will be showing end-to-end production workflows running in a server environment at the 2017 NAB Show, April 22-27, in Las Vegas. “The major challenges are not on the performance side of things. All of the professional systems can do more or less the same thing.

“Today, it’s all about workflow when it comes to graphics, and what is that? It’s about how complicated it is to go from the design phase to the playout phase.”

“On the journalist side, make sure they have the tools that allow them to find an asset very quickly, add graphics, edit swiftly and then publish to a central playout server or control room,” he says.

Where this approach achieves even greater workflow efficiency is its use of “metagraphics,” Andersen adds. “Basically, that allows the journalists to add all the graphics on their stories and publish them as metadata — instead of burning the graphics into the clip.” Doing so makes it easier to repurpose the clip to other platforms — such as mobile, web or social media — without re-editing and republishing.

Simplifying broadcast graphics tasks for those in the newsroom has been a major focus at Ross Video, says Patrick Twomey, company director of product marketing, product management and business development for XPression.

Stations are asking their employees to do more with fewer resources. In the newsroom that means journalists aren’t only writing their scripts, but also editing their stories, building their own graphics and even publishing to other platforms.

To make the graphics part of that workflow easier and integrate it more tightly with the newsroom computer system, Ross has developed the XPression MOS plugin, which it will highlight at the NAB Show. The plug-in is template-based and uses radio buttons and check boxes to allow newsroom users to select options like adding a “LIVE” upper left tag  to lower-third graphics, Twomey says.

Even graphic treatments considered to be on the more sophisticated side of on-air presentation, such as augmented reality and virtual set components, are being affected by the drive to simplify the graphics workflow.

“We can actually say now that working with a virtual set is as easy as working with a lower-third,” says ChyronHego’s Gawell. “We have seen some U.S. stations using virtual sets tied into the Cameo workflow. There is no way to say broadcasters need a separate, standalone workflow for virtual.”

But workflow isn’t the only development in broadcast graphics to look for at the NAB Show. At Imagine Communications, the focus has been on leveraging software products like Adobe After Effects, Premiere and Photoshop to create graphics, says Darby Marriott, company product manager of graphics, branding and editing solutions.

“We are trying to make sure we are not forcing proprietary products that would require additional training and staffing,” he says. “But that’s not to say we are getting out of graphics.”

The company’s approach is to allow creative designers to do their work in After Effects and then rely on the output file — not simply the media but also the metadata — to enable its Versio playback platform to insert and replace graphics in real time, he says. At the NAB Show, Imagine Communications will highlight Versio working with After Effects.

Social media, too, is having an effect on the look of broadcast graphics, says Jay Shinn, VP at FOR-A, which recently announced an exclusive agreement to distribute ClassX 2D/3D character generator software in North, Central and South America.

“We are seeing with high-end shows, like Today, and at smaller TV facilities, that they want to emulate the same look and feel [of social media], because it’s that social media look that the audience is looking for,” he says.

At the NAB Show, FOR-A will feature ClassX integrated with its production switchers and other gear to create a social media look for on-air presentations “easily and affordably,” Shinn says.

However, there is another way to lower the expense of graphics for broadcast that does not involve the out-of-pocket cost of a system, says Ciaran Doran, EVP for international sales and marketing at Pixel Power, which will feature its OnDemand software-only, pay-as-you-go solution for branding, promos and graphics at the show.

By automating tasks and licensing the use of graphics software rather than purchasing it outright, broadcasters can use their graphic designers more effectively and slash the overall expense of graphics creation, especially when it comes to on-air promotion of upcoming programs, cross-channel promos and branding, he says.

“Software-only versions [of broadcast graphics] not only give broadcasters the ability to access something they require [graphics generation], but to do so without being locked in. They can buy on a quarterly basis or even an hourly basis if they want to test something,” Doran says.

Many of these same trends will affect the direction of weather graphics presented at the NAB Show. For instance, workflow has never been more important for meteorologist than today when they are awash in copious amounts of data from a network of dual-polarization National Weather Radar; a new, much higher resolution NOAA GOES-16 satellite launched in November 2016; and other sources.

“More than ever, we are hearing requests to help train people and do anything we can to save them time so they can deal with this flood of weather data,” says Mike Mougey, VP of broadcast sales at Baron.

Severe weather activity compounds the problem, creating a situation “when people can really get overwhelmed with data,” he says.

At the NAB Show, Baron will feature its new Hand Tracker, which the company says will help users deal with the voluminous weather data more easily by giving meteorologists access to all of their weather data and the ability to operate the Baron system while at the green screen in front of their audience. It also will help stations better address the real reason people watch weather reports, he says.

“Everyone has access to a seven-day [forecast] every day, whether it’s in their pockets or purses,” Mougey says, referring to smartphone weather apps. “Audiences are clearly looking for the ‘why’ in a forecast, and broadcast television stations are seeking ways to tell viewers why weather is happening.”

One way The Weather Co. is helping broadcasters communicate the reason for weather activity is through the use of “highly realistic visualizations” created via augmented reality, says Bill Dow, GM of The Weather Co.’s Broadcast Media Group.

“We know through research that 64% of the people we studied said that they would stay tuned in longer if they knew that an augmented reality presentation was coming up next,” he says.

That’s particularly important in attracting millennials, many of whom grew up playing video games with realistic graphics, Dow adds.

In Las Vegas, The Weather Co. will show how its Max Reality augmented reality weather platform, Max Sky and Max Traffic XD can create these sorts of realistic visualizations to engage viewers, he says.

AccuWeather’s approach at the NAB Show will be to immerse cityscapes with 3D buildings in weather conditions as they are predicted to unfold, says Bill Boss, director of product development for the company.

“We are doing something new this year, which is putting those 3D buildings and weather conditions into an interactive environment using some of the capabilities of our StoryTeller [interactive presentation system] with our StormTracker weather product to allow a presenter to go in and rotate around that city,” Boss says.

Combining the systems not only allows a meteorologist and viewers to change perspectives on conditions but also to do so on a timeline to show how a storm will affect the metro throughout the day, he says.

Like past NAB Shows, this year’s gathering will also give vendors and attendees the chance to take new technologies to the limit to discover what’s possible. Broadcast graphics will see its share of the avant-garde at the show.

Enter Maxon, which at this year’s show will feature 20 different artists using its Cinema 4D software in a wide variety of applications, including motion graphics for VR, says company President-CEO Paul Babb.

“The challenge is how to incorporate motion graphics into the VR experience. Where do they appear?” he asks.

“I wouldn’t call it the Wild, Wild West, but everybody is trying to figure out the best way to incorporate all of this data and information and do it in a way that creates an interesting experience for people.”