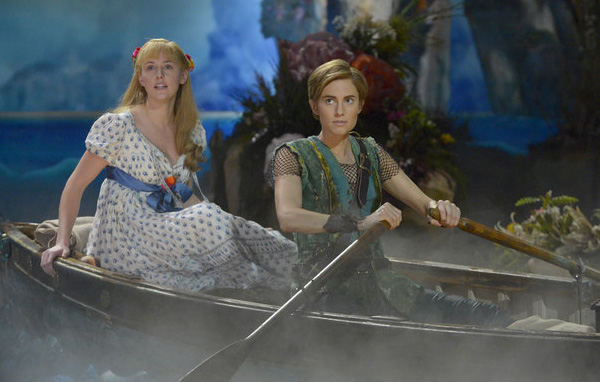 Live network programming like Peter Pan (above) hasn’t been the ratings boon that many thought it would be. “A live-event program only becomes an ‘event’ when it isn’t done all the time,” says NYU professor Andrew Goldman. However, NBC is still going ahead with a live musical in December and a live drama next year.

The broadcast networks’ love affair with new live entertainment programming appears to have been short-lived.

While the schedule for the upcoming 2016-17 network TV season includes the return of a handful of live-event stalwarts — the usual awards shows plus at least one live musical and one live drama on NBC — such events, which had been increasing modestly over the last few seasons, seem to be out of favor.

More live TV “was certainly the anticipation,” says Bill Carroll, SVP and director, content strategy, Katz Television. “What ended up happening was that they was found that … just because the programs are live, it doesn’t make them any more special [than recorded shows].”

The trend may have reached a peak of sorts in May 2015 at NBC’s upfront presentation in New York. It was there, at Radio City Music Hall, that NBC Entertainment Chairman Robert Greenblatt announced that the network’s lineup for the 2015-16 season would include at least three, high-profile live projects.

The three would support his contention — and the opinion then in vogue — that the broadcast networks were best positioned to produce live, must-see TV and that such shows would draw big audiences, generate plenty of buzz and be largely DVR-proof. NBC’s live shows, Greenblatt said, would underscore network TV’s ability to “give viewers extraordinary moments to share and remember.”

“There was absolutely a push,” says Dave Campanelli, SVP and director of video investment for Horizon Media. “They were looking for more stuff that is DVR-proof [where] live ratings or C3 ratings would not be impacted negatively by people viewing something by playing it back four or five days later.”

But after the season got under way that fall, two out of three of NBC’s live projects — the eight-week entertainment-variety show Best Time Ever with Neil Patrick Harris and the sitcom Undateable, which aired live for its entire 13-episode season in 2015-16 — went nowhere. Both were canceled.

NBC is also going ahead with a live production of A Few Good Men, which was a stage play before it was adapted for the 1992 feature film starring Tom Cruise and Jack Nicholson. Aaron Sorkin, who wrote the original play and the movie screenplay, is revising the play for a live telecast on NBC that will air sometime next year.

This project was officially announced by NBC last winter, but it’s been on the drawing board for at least two years.

NBC and Greenblatt were chiefly responsible for renewing interest in live entertainment with its series of live musicals. The first of them, The Sound of Music Live! starring Carrie Underwood, aired on Dec. 5, 2013, drew 18.62 million viewers was one of the network’s most-watched shows that season. The second musical, Peter Pan Live!, drew half the audience — 9.21 million — on Dec. 4, 2014, but it was enough to keep the series going. Viewership rebounded for The Wiz Live! last season. Its fourth live musical, Hairspray Live!, is schedule to air Dec. 7.

Recent seasons have each included a small number of new entrants in the live-event television arena by other networks going back at least to 2012. That was the year ABC aired a live stunt — aerialist Nik Wallenda’s live tightrope walk over Niagara Falls that June.

The two-hour telecast averaged 10.3 million viewers, 13.3 million during the final half-hour in which much of the crossing was made, robust numbers for a Friday night in late June. And yet, ABC hasn’t aired any follow-up stunt shows since.

Subsequent Wallenda walks were aired on Discovery Channel — 2013’s live walk over a canyon in Arizona (10.7 million viewers) and 2014’s live walk between two skyscrapers in Chicago, which drew half the viewership of the canyon walk (5.82 million viewers).

In November 2014, CBS tried out a new live, movie awards show in an apparent attempt to develop its own entrant in the annual parade of Hollywood awards shows that include the Golden Globes on NBC and the Academy Awards on ABC.

So CBS agreed to air the self-styled Hollywood Film Awards, which had been around since 1997, but had never been televised. The show, which aired in November 2014, was promoted as the “kick-off” of the annual movie awards season, but it drew a lowly 4.1 million viewers and was never seen again. CBS remains the host of the Grammy Awards, however.

To some observers, the Hollywood Film Awards illustrates why network TV’s brief flirtation with live-event programming has begun to fade.

“Every so often, there are these events that come on [such as live musicals], that just hit the zeitgeist. They’re for everybody,” says Andrew Goldman, chief strategy officer for TVtibi and a professor of television at NYU’s Tisch School of the Arts. “And then what do they do? They overdo it. It’s like I have one drink, but if I have five drinks, I’ll feel five times better. It’s the same thing and then we all get a hangover. The whole business says, ‘I have to do it because look at what they did.’

“But a live-event program only becomes an ‘event’ when it isn’t done all the time,” Goldman says.

Only Fox has climbed aboard the live musical bandwagon in NBC’s wake. Fox’s Grease Live! last January drew 12.18 million viewers and critical raves. But the network has yet to confirm if it will mount another live musical next winter. The one musical on Fox’s schedule for the upcoming season — The Rocky Horror Picture Show: Let’s Do the Time Warp Again, airing Oct. 20 — is not a live telecast.

“I wonder about the economics of how much it costs to put on a [live] performance like that for a good, but not outstanding rating — if it’s worth it at the end of the day,” says Horizon’s Campanelli. “That’s probably why you’ve seen a plateauing of these events.”

Although the networks are not expanding their live offering, they are clinging to the proven ones they have. ABC, for example, said just last week that it had renewed its rights deal with the Academy of Motion Picture Arts and Sciences for the Academy Awards far into the future — through 2028.

In the announcement, Disney/ABC Television Group President Ben Sherwood took up the “live-event” theme. “With this new landmark agreement, ABC is proud to showcase the Oscars all the way to their centennial celebration in 2028,” he said. “Broadcast television brings together the biggest audiences with high-quality, live events.”

It’s helpful if the live program is also good.