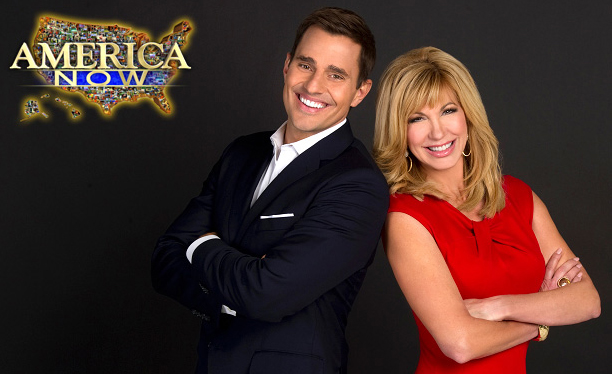 The current, fourth season will be the last for the syndicated lifestyle show. Raycom is now shopping two new half-hour strips: Fix It & Finish It and Flip My Food with Chef Jeff.

Raycom Media confirmed Tuesday that its newsmagazine America Now with co-hosts Leeza Gibbons and Bill Rancic will not return for a fifth season this fall. America Now is produced by ITV Studios America for Raycom. Trifecta Entertainment distributes the show.

“America Now is a show we are extremely proud of,” says Paul McTear, president-CEO of Raycom Media. “We love Leeza, Bill, the content and the fact that it’s family friendly and advertiser friendly. But it failed to measure up, from a business-model standpoint.”

Raycom covers 100% of the show’s production costs. “We kept it alive as long as we could sustain it,” McTear says.

America Now is a half-hour lifestyle show that provides tips for healthy living and finding bargains with a combination of original content and clips from Raycom stations’ news programs. It is cleared in more than 75% of the country, including on Raycom stations such as CBS affiliates WOIO Cleveland and WBTV Charlotte, N. C.

So far this season, America Now is averaging a 0.2 rating among women 25-54. It ranks No. 7 among eight syndicated newsmagazines.

This fall, Raycom will air two new half-hour strips. Fix It & Finish It and Flip My Food with Chef Jeff are being distributed to non-Raycom stations by Bellum Entertainment, a 50-50 partner with Raycom on the shows.

“We put the business plan together based on clearing Raycom stations,” says McTear. “We are out knocking on doors to see if we can get Chef Jeff or Fix It cleared in a few other markets.”

A shame that America Now didn’t get much traction. Definitely a fresh alternative to the celebrity-loving news magazines that are too commonplace.

Gosh, all the previous Raycom press releases said it was a big success. Reality bites.

“Filp My Food” . You can’t be serious. Was “Toss My Cookies” already taken?

Raycom seems to like the idea of being in pretend syndication.

It stunk from the very beginning. Like a lot of things Raycom does….

The smartest guys in the room are wrong…AGAIN!!!!