Back to TVNewsCheck Home Print this page
DMA 88 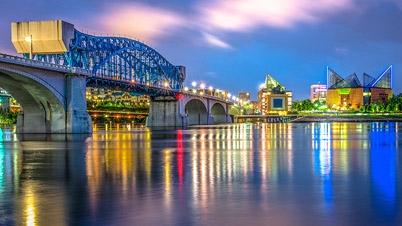 Despite the FCC's local ownership limits and its crackdown on joint sales agreements, the mega-station group has emerged with the market's ABC and Fox affiliations and a JSA with the CW outlet.

Sinclair Broadcast Group, which has hardly been shy about pushing the envelope on FCC ownership rules, has a new angle.

Last summer, the Baltimore-based mega-broadcaster scooped up a second network affiliation in Chattanooga, Tenn. (DMA 88) — and a joint sales agreement for yet another outlet in the same market — in a transaction that the company consummated without FCC review.

Under the arrangement, Sinclair, owner of Chattanooga’s ABC affiliate WTVC, acquired the local Fox affiliation from New Age Media’s WDSI. As part of the transaction, Sinclair also acquired New Age Media’s JSA with WFLI, the market’s CW affiliate, which, according to FCC records, is owned by Eugene J. Brown of Wilkes-Barre, Pa.

Now Sinclair is broadcasting ABC and Fox network programming over WTVC. Plus, under the JSA, it is selling advertising for WFLI.

New Age is operating WDSI as an independent, airing mostly This TV, the multicasting network.

A Sinclair source declined to say how much it paid New Age to take over the ABC affiliation and the JSA.

“We’ve acquired the programming contracts and assets and will basically manage the stations, but for the viewer there will be no immediate changes,” WTV GM Mike Costa told the paper/website. “We’re bringing our teams together, but there will continue to be sales staff selling Fox and CW and this sales team will continue to sell WTVC. We’ll march forward and see how things work.”

When TVNewsCheck called last week, he deferred to corporate headquarters and New Age Media did not return calls for comment.

Other broadcasters in the market are still taking a wait-and-see attitude toward the deal.

“It’s too early to know what the impact will be, if any,” said Tom Tolar, GM of Chattanooga’s NBC affiliate, WRCB, which is owned by Sarkes Tarzian.

Added Phil Cox, general manager of the Morris Multimedia’s CBS and Bounce affiliate, WDEF: “We’re certainly aware of the changes, and we’re monitoring how the new dynamics will impact the marketplace.”

The Sinclair source said the transaction was not filed at the FCC because no broadcast licenses were transferred in the deal and therefore no agency approval was needed.

In addition, the Sinclair source said the company did not believe that FCC approval was necessary to transfer control of the JSA involved, again because no transfer of an agency license was involved.

Sinclair’s decision to keep the JSA transfer out of the FCC appears to have been a smart one, because the commission has signaled that it’s not likely to approve JSA transfers that come before it.

The anti-JSA precedent came down last week when the FCC approved Gray Television’s $442.5 million acquisition of Schurz Communications’ TV and radio stations, but refused to grant a waiver to transfer a JSA between Schurz’s KWCH and Entravision-owned KDCU in Wichita-Hutchinson, Kan.

“[We] find that, on the basis of the record before us, Gray has not made a showing sufficient to justify such a waiver,” the FCC said in its decision.

In the age of digital TV, cable and satellite prolification, the UHF discount needs to end and be enforced. Outside of the major markets, Sinclair (and soon Nexstar) just control too much of the voice in many local areas with multiple station ownership/JSAs. I would think that it violates “in the public interest.”

Most radio stations, TV stations, and newspapers in the US are now held by just a few large corporations, which means just a handful of people control most of everything we hear, read and see. Considering the mindset of corporations these days, (more money more money more money) they are not the impartial bastions of public protection and the exposers of government malfeasance they once were, as they now prefer the folks who would let big business interests do whatever they can get away with to make more money. (Conservatives.) That’s why the reports you used to see about catching a politician with his hands in the till have been replaced by “awwww, cute doggie!” stories, and why we only hear about things like the water situation in Flint when they become too egregious to ignore.

The top news station in my market seems to be more focused on viral videos. And radio in my market is the worst in the country, very unlistenable with a has-been shock jock back on the air, despite low ratings. Any wonder why young people are fleeing from traditional media?