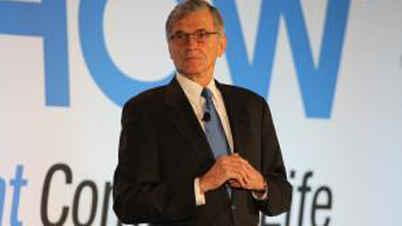 Stepping out from behind the podium in a symbolic gesture of breaking down barriers with a tough audience, FCC Chairman Tom Wheeler used his NAB Show keynote speech to return to now-familiar themes to convince broadcasters that the auction was a “once-in-a-lifetime opportunity.” He addressed some of the broadcasters’ questions, but not all of them, leaving the biggest concerns about the auction at home in Washington.

FCC Chairman Tom Wheeler tried to reassure broadcasters he cared about their business even as he upped his sales pitch, asking them to sell their spectrum in the broadcast incentive auction only one year away.

There is no more important issue facing TV broadcasters than the auction, which will no doubt alter the TV business forever. It’s equally critical for Wheeler’s legacy in molding the nation’s wireless spectrum policy, so he had a lot on the line when he faced broadcasters Wednesday morning in Las Vegas.

Wheeler gave it his best shot. Stepping out from behind the podium in a symbolic gesture of breaking down barriers with a tough audience, Wheeler’s keynote speech returned to now-familiar themes to convince broadcasters that the auction was a “once-in-a-lifetime opportunity.” And he dangled something that always gets broadcasters’ attention, cash — the $41 billion brought in by the AWS-3 auction.

But first Wheeler told broadcasters what they wanted to hear.

“I’ve heard and read how some believe the FCC has been ignoring broadcasting in favor of shiny new baubles such as the Internet,” Wheeler said during his keynote Wednesday to a packed audience. “Watching TV is our national pastime; it isn’t baseball.”

Giving the speech higher marks than last year’s speech, many broadcasters called it “conciliatory,” though not totally satisfying.

All week broadcasters have been fretting about the auction, which so far raises more questions than answers. Wheeler addressed some of the questions, but not all of them, leaving the biggest broadcast concerns about the auction at home in Washington.

Instead, Wheeler talked up wireless carrier demand for broadcast spectrum and the growing interest of some of the nation’s biggest broadcasters, Ion Media, Tribune, 21st Century Fox and Univision, to participate in the auction.

“We want to make broadcaster participation more accommodating,” Wheeler said. “NAB’s Gordon Smith said to us we simply have to simplify. We got your message,” Wheeler said.

NAB President-CEO Gordon Smith said he appreciated Wheeler’s gesture. “That will go a long way to allowing market forces to work rather than government determinations to be imposed, he said speaking to the press following Wheeler’s speech.

Pushing the broadcaster option to relinquish half their spectrum and share a channel with another station, Wheeler announced he circulated a new set of rules that will allow full-power and Class A stations to select channel sharing partners before and after the conclusion of the auction. Parties would also be able to enter into channel sharing agreements for fixed terms.

“We like channel sharing so much, in fact, that we’re proposing to allow channel sharing between stations regardless of whether they participate in the auction next year or not — although those that decide to channel share outside of the auction context will not be able to collect auction proceeds,” Wheeler added.

He also acknowledged broadcasters’ increasing concern that the $1.75 billion set aside to reimburse broadcasters when the FCC moves them post-auction and said the FCC was looking into how to make the most efficient use of the cash.

But as Smith noted, getting more money for stations to move will be up to either the carriers picking up the tab or Congress changing the amount.

Wheeler’s concentration on drumming up participation still fell flat with broadcasters who are more concerned with what happens after the auction is held.

“The auction piece is one half of one side of the coin,” NAB’s Smith said. “The repack is a daunting challenge and will prove, I suspect, physically and extraordinarily difficult. The timing of it, when money changes hands, when spectrum is conveyed, when channels are off the air and back on the air, these are big questions,” Smith added.

Many broadcasters are skeptical those pieces can all come together in the 39-month timeline.

Despite all the actions the commission must take before it begins accepting station applications for participation in the fall, Wheeler reiterated once again that the FCC was on track to hold the auction in early 2016.

What could hold up Wheeler’s timeline was the NAB lawsuit still pending. “We can’t ignore the elephant in the room — the broadcaster lawsuit. We hope the court will dispose of the lawsuit and allow us to move forward,” Wheeler said.

For broadcasters, Wheeler ignored several other elephants, including dynamic reserve pricing and repacking

Although the chairman touched on a few other issues, like the open Internet and the trend toward over-the-top video, no one was listening. It was all about spectrum.

“Let me make the pitch one more time,” Wheeler said at the conclusion of his speech. “The incentive auction is a once-in-a-lifetime opportunity…. The FCC has no other auctions planned or expected…. It’s entirely voluntary, you can decide based on final bids.”

Yet only 8 to 9 percent of homes make the choice for antenna-delivered TV signals.

I’m sure they heard crickets in the room when Tom Wheeler was giving himself a hernia by cheerleading channel sharing. I don’t know of one broadcaster who wants to do this–with the possible exception of noncoms. Besides, if ATSC 3.0 is given the go ahead, channel sharing will be unnecessary.