Back to TVNewsCheck Home Print this page
NATPE 2016 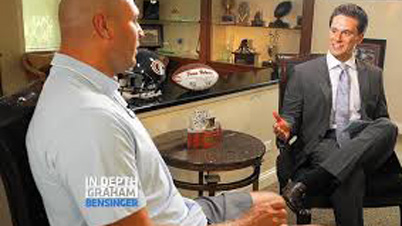 Now in its sixth season, Graham Bensinger’s weekly interview show In Depth with sports heroes of yesterday and today has grown to 26 half-hours per season offered to stations on a straight barter split. It now has 87% U.S. coverage.

Other than sports and the requisite children’s programming, there is not much to weekends on most TV stations, not many people tuning in. Yet, some programming entrepreneurs see the odd hours on Saturday and Sunday as golden opportunities for their unusual mix of weekly TV shows.

Among these weekend warriors, who will be out in force at NATPE this week, is Graham Bensinger, sole-owner, executive producer, sponsor closer, tenacious booker, distribution chief, promoter and well-traveled host of In Depth with Graham Bensinger, a weekly interview show with sports heroes of yesterday and today.

Now in its sixth season, In Depth offers TV stations 26 half-hours per season on a straight barter split. It’s available in 87% on the country, mostly via broadcast (76%) with an assist from regional cable nets. The lineup includes stations in all of the top 50 markets except Orlando, Fla., and Buffalo, N.Y.

So far this season, the show is averaging 927,000 viewers each weekend (broadcast only), up 28% from last season, and up 75% from the season before that, according to a Bensinger rep.

For Bensinger, the show is all-consuming, leaving little time for anything else, including watching sports. “I am surprisingly not a diehard sports fan,” says Bensinger, who will be at NATPE looking to renew existing carriage deals and score new ones with his Director of Distribution Liz Mullen.

In his interviews, he aims for personal insights rather than expert analysis of sports. And he doesn’t shy away from controversial topics.

Over this past weekend, In Depth featured a recut interview with Cam Newton from last April. Bensinger figured the Carolina Panther quarterback rolling through a MVP-caliber season justified a second look. (He was fortunate the Panthers won their playoff game on Sunday afternoon to keep interest in Newton alive.)

One of Bensinger’s immediate goals is to add an automaker to the lineup. “We also need a soda or beverage and there are a handful of other categories that we can get.”

Bensinger goes to where his subjects are rather than wait until they pass through his home base of St. Louis. And nowhere is too far. He’s been to South Africa (Gary Player), Moscow (Alex Ovetchkin) and Shanghai (Yao Ming).

And he seems to have no fixed criteria in choosing his subjects. They include representatives of major sports as well as the minor ones like surfing and mushing, active players and retired ones. “I am conflicted at times because sometimes the retirees are less relevant, but they generally have the richest stories because there is more history there.”

His favorite subject is a retiree, Cleveland Browns great Jim Brown whom he has interviewed several times. “It’s just always such a treat. He is in his mid-70s now, sometimes walks with a cane, but he can still kick my ass 10 times over.”

He also stretches the definition of sports figure to permit sessions with the likes of custom motorcycle builder and reality TV star Jesse James and comedian Ray Romano, a poker and golf enthusiast.

Bensinger is something of a TV prodigy who launched a sports talk “radio” show on the Internet when he was just 14. The show migrated to Sporting News Radio and then ESPN Radio.

A turning point came in 2009 when NBC chose not to renew his contract. Rather than seek another job, he decided to go off on his own. “So I started more out of necessity, but it’s really turned into something that is without a doubt the most satisfying work I have ever had the opportunity to do.

“I went from just knowing how to book a guest and conduct an interview — and a half decent interview at that — to being involved with every facet [of a business], doing the interviews and being involved in booking the guests and producing the show and ad sales and sponsor development and syndication and distribution and managing people.”

The business has not been without challenges. The biggest came in the fourth season (2013-14) when Bensinger staffed up, went from 12 to 26 shows and made the move into broadcast syndication. It was too much.

But in July 2014, he says, he was able to renew a big sponsorship deal with Snickers that allowed him to pay off a line of credit that was crushing him and insure a profit for the season.

“I know this sounds ridiculous, but when I did the deal, I got off the phone and I just burst out crying. It had been such a long road…. You almost like feel like you don’t deserve for something positive to finally be happening because it’s been just so tough for so long.”

The business is on solid ground now. So much so, he says, that he was able to open an office in Clayton, Mo. (just west of St. Louis) prior to this season where his team can all work together for the first time and post-produce the show.

“We have a team of nine-full time people and then there are a few part-time people and we could easily have half a dozen more people if budgets allowed.”

Bensinger, still just 29, is now thinking about leveraging his production resources, either by doing production work for the sponsors or by producing another show, not necessarily sports-related. “Those are avenues I am interested in exploring when the time permits, but first and foremost the priority is just continuing to do the show.”