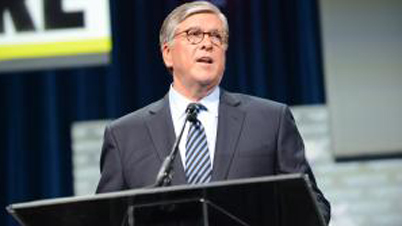 NAB President Gordon Smith opened the group’s annual gathering with a list of priorities that included FCC ownership rules, the threat to the “retransmission consent process” posed by the cable TV industry and the FCC’s management of the upcoming incentive auction. He also declared that local broadcasting is “more important today than [it] has ever been,” particularly when it comes to providing news and information that is relevant to their communities.

NAB President Gordon Smith criticized social media and cable television as sources of unreliable news and information — a weakness that he feels has made broadcast TV and radio even more vital than ever to their local communities.

Smith also laid out the NAB’s legislative and policy priorities in his State of the Industry speech delivered this morning here to open the 2015 NAB Show in Las Vegas.

Among the issues ranking high on the NAB’s agenda, according to Smith: ownership rules, the threat to the “retransmission consent process” posed by the cable TV industry and the FCC’s management of the upcoming incentive auction.

“With our headquarters moving just minutes away from Congress in 2018, we will send a strong message to policymakers that we are focused on the issues that impact broadcasting’s future,” Smith told NAB attendees. “That message includes … working towards common-sense ownership rules that reflect today’s media landscape, and preventing pay TV companies from dismantling the retransmission consent process.”

“The TV industry is also facing the prospects of an auction that is both exciting and daunting,” Smith said. “Following the wildly successful spectrum auction that concluded earlier this year, many broadcasters have begun to look more seriously at the possibility of participating in the upcoming incentive auction. The one refrain I have heard, however, is that this participation is contingent on the FCC getting the auction rules right.

“The FCC must simplify its rules and stay out of the price-determining business,” Smith declared, “and instead allow the market to determine the price of each 6 MHz channel. If the commission can stay out of the way, I believe we can have a successful incentive auction.”

Understandably, considering his audience of broadcasters, Smith declared that local broadcasting is “more important today than [it] has ever been,” particularly when it comes to providing news and information that is relevant to their communities.

“Every day, people like you and me are bombarded with overwhelming amounts of information that come from an array of platforms,” he said, singling out YouTube and social media. “But when people go to these sources of information, what do they find? Maybe a heated debate over the color of a dress …. Or maybe the latest celebrity gossip on Kim and Kanye.

“What you find on pay TV often isn’t much better,” he said. “There the so-called news is fraught with partisan bickering, where the end-goal seems to be who can shout the loudest.… In a time when cable news media is becoming incredibly polarized and partisan … local news has become even more valuable.”

“Broadcast radio and television [are] the glue that keeps us together,” he said. “We can’t take what we have for granted, and we have to work together to remind policymakers of broadcasting’s immense value to [its] communities.”

Smith also outlined the NAB’s role in encouraging the development of “next-gen” TV technologies, a great deal of which is on display at the Las Vegas Convention Center. Among the attractions: A special “drone pavilion,” where convention-goers can see the latest in aerial production equipment, and a showcase of new technology the NAB has dubbed “Futures Park.”

“As we get closer to realization of the next generation of television broadcasting, we are beginning to envision the new business opportunities it could enable. I believe next-gen may be the key to building TV’s future,” Smith said.

“Our NAB Labs team has produced a hybrid TV demo at Futures Park in the North Hall that features new service capabilities that might be included in future TV systems — like the ATSC 3.0 standard currently under development,” he said.

“We are excited about the promise of 4K Ultra HDTV, which adds more resolution and contrast to broadcast video,” he added. “That means sharper and brighter pictures that provide spectacular images on super-sized screens.”

There is even a demo here of “8K super hi-vision,” he pointed out. It’s being demonstrated on a 350-inch screen with 22-channel sound.

For many at the NAB’s opening session this morning, the highlight was an in-person appearance by Jerry Lewis, 89, who received the NAB’s annual Distinguished Service Award. With the aid of a cane, Lewis came to the podium and thanked the NAB for the award, which honored his long career in show business and philanthropy.

He was followed by a keynote speaker, producer Peter Guber, chairman and CEO of Mandalay Entertainment, who spoke on the subject of new technologies — with a particular emphasis on innovations in virtual reality — and how they are poised to revolutionize the entertainment industry.