SMPTE Tech Conference: It Was About Time 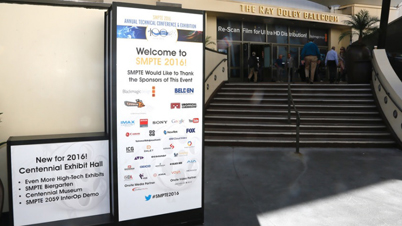 Under the umbrella of its 100th anniversary, the tech group looked back at its rich history of innovation while confronting current and future topics, trends and techniques including IP networking, 4K, SDI, developing standards and more. SMPTE photo

At the 2016 SMPTE Technical Conference & Exhibition last week in Hollywood, Calif., time was not of the essence, it was the essence.

Almost anywhere one of the nearly 2,500 registered attendees looked there was a reminder of the special place that time held at this year’s gathering.

That should be no surprise for an event commemorating SMPTE’s centennial.

In the newly opened Centennial Hall, which joined the Ray Dolby Ballroom as home to the event’s 108 exhibitors, a special historical exhibit dedicated to Society of Motion Picture Engineers (TV would be added decades later) founder and president Charles Francis Jenkins brought the history of the man and the organization into focus. (Editor’s note: To learn more about Jenkins historical exhibit, see: “SMPTE Honors Founder On Its Centennial.”)

Nearby in the Centennial Hall the focus on time took the form of an SMPTE ST-2059 interoperability demo and the standard’s use as a sort-of black burst equivalent for IP network media synchronization.

“IP networks are jittery and nondeterministic, especially when it comes to timing,” said Paul Briscoe, principal consultant at Televisionary Technology Consulting in Toronto, who gave a presentation on the status of IP transport in live TV production and also walked visitors through the SMPTE ST-2059 demo.

Besides interoperability of IP equipment from multiple vendors, the demo highlighted that is actually possible to deliver timing references across an IP network and achieve the same performance expected from today’s references; showed the type of IP switches needed on a network that will allow traffic without altering timing; and demonstrated how redundant master operations can be accommodated in the same way as is done with legacy sync generators, Briscoe said.

Time was even addressed generationally with sessions and events for millennials, including a panel discussion with millennials explaining how they ended up in technical careers in the entertainment industry, the launch of a mentoring program for young industry professionals and an expanded student film festival.

Time and technology was the theme of the official technical conference kick off on Oct. 25 with a keynote examining the past, present and future of TV and movie technology.

Seidel discussed TV pioneers like John Logie Baird and his electronic scanning and transmission system, Philo Farnsworth and his image dissector tube, as well as Vladimir Zworykin and the CRT.

He recounted the Golden Age of TV following World War II, including the CBS field sequential color system, which was never a commercial success but did bring color TV back from the moon during the Apollo missions, and RCA’s backwards-compatible color system that was standardized as NTSC.

Seidel also described the development and deployment of HDTV, including Hi-Vision, the Grand Alliance, multiple HD firsts and the chicken-and-egg problem of HD content availability and consumer uptake of HDTVs.

He pointed to the CBS All Access OTT service as an example of how TV technology is evolving to serve new consumer demands and emphasized that OTA transmission will continue to play an important and growing role, especially as the number of consumers cutting the cord increases.

On the horizon, TV broadcasters must decide how to pursue 4K — whether to transmit 4K or allow the consumer set to up-convert to 4K — the role of HDR and the associated question of how bright is bright enough for TV, he said.

Trumbell delivered a similarly expansive look at cinema technology from the early work of the Lumiere brothers in France to the work he is doing today at Trumbull Studios to increase brightness, eliminate judder and blurring and maintain the cinematic look.

Of course, the SMPTE conference and exhibition addressed other key technology developments besides time.

Some presentations covered IP networking challenges and opportunities such as virtualizing broadcast operations, data centers and the cloud and IT-based media infrastructure. Others focused on the challenges faced today, like coaxial cabling performance and behavior and the evolution of SDI.

Still others examined issues broadcasters will face in the future, such as UHDTV, high frame rate, high dynamic range and wide color gamut, a 100 Gb/s real time interface for 4K and 8K and UHDTV production equipment and workflows.

Like all significant milestones in life, the SMPTE centennial gave the organization an opportunity to celebrate its past accomplishments and assess where it is headed, said SMPTE Executive Director Barbara Lange.

“I have been calling us the 100-year-old startup because we have a bright future,” she said. “This industry is going through such dramatic, rapid change that SMPTE is more important and relevant than ever.”

Driving that acceleration is the influence of the IT industry on the media and entertainment business.

Where the rapid release of software revisions, new spins of hardware and breakthrough technologies are the norm in the IT world, the slow, deliberative due-process approach to standards development may be out of sync with today’s realities.

Perhaps what is needed is a new type of standard, said Matthew Goldman, SVP of technology at Ericsson and SMPTE president-elect.

“Maybe the standard is a little less formal than a due-process standard, but much more formal than a registered disclosure document or just a de facto standard,” said Goldman, who takes the reins as president in January.

One of Goldman’s priorities as president will be looking for a way to “leverage the formality of doing due process” in standards work but not be “as rigid” so the organization can become faster and more agile, he said.

The 2016 SMPTE conference wrapped up Oct. 28 with a black-tie Centennial Gala in the Ray Dolby Ballroom attended by about 500 people.

During the gala, filmmaker, director and producer James Cameron received SMPTE Honorary Membership, the society’s highest accolade, and Trumbull was awarded SMPTE’s Progress Medal in recognition of his numerous contributions to the photographic process, visual effects and cinematography.

At the gala, Cameron pledged to continue pushing for better storytelling tools and workflow. The director and writer of Avatar also said he is “very bullish” on 3D and thinks one day it will be possible to present 3D without glasses.