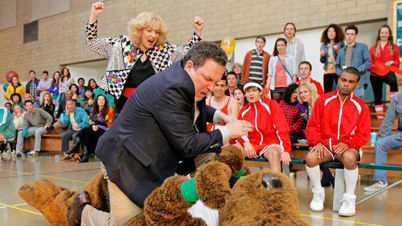 The cash-and-barter deal calls for The Goldbergs to be cleared on Tribune stations in 18 markets covering 37% of U.S. TV households, beginning in fall 2017.

SPT is distributing The Goldbergs, which just ended its third season on ABC, and has been renewed for a fourth starting this fall. The show’s syndication run will begin in fall 2017, after its fourth season on the network.

The cash-and-barter deal with Tribune calls for The Goldbergs to be cleared on Tribune stations in 18 markets representing 37% of U.S. TV households, SPT said.

“With three consecutive seasons of ratings growth, The Goldbergs is the No. 1 comedy available in the market this year, and for the next several years looking ahead,” said John Weiser, president of distribution, Sony Pictures Television. “It is poised for a long run on ABC and in syndication.”

“The Goldbergs is a stand-out comedy with all-family appeal, growing ratings and buzz-worthy storytelling, making it a great fit for our stations,” said Sean Compton, president, strategic programming and acquisitions, Tribune Media.

Sony Pictures Television also produces The Goldbergs, which premiered on ABC in September 2013. The show is based on producer Adam Goldberg’s life as a teenager growing up in the 1980s in the Philadelphia suburb of Jenkintown, Pa.