Back to TVNewsCheck Home Print this page
UPDATED 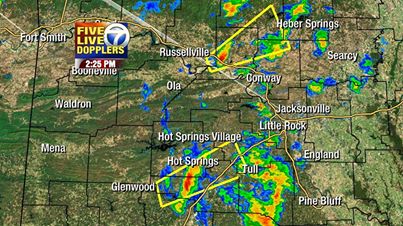 In covering tornados over the past week, broadcasters supplemented their more traditional on-air, real-time forecasting and weather radar images with warnings on social media sites, station websites and even robotic telephone calls. Doug Heady, chief meteorologist at KOAM Pittsburg, Kan., says: “I really don’t consider us nowadays to be TV meteorologists; we are kind of multimedia meteorologists.”

TV stations in the path of this week’s deadly tornados in the plains and the South used a variety of media — not just their broadcast signal — to warn the public of the impending danger.

Doug Heady, chief meteorologist at KOAM, which serves Pittsburg, Kan., and Joplin, Mo., says social media and the Web are transforming his role and that of his peers.

The severe weather system developed in rural central Nebraska on Sunday afternoon. At about 5:30 p.m., a tornado struck Quapaw, Okla., a small town in the northeast corner of the state. The system moved north into Kansas where one tornado struck Baxter Springs and another touched down northwest of Joplin.

The same system then spawned a massive tornado that struck central Arkansas, including the towns of Vilonia and Mayflower, north of Little Rock. By Monday morning, the system had moved into northern Louisiana, Alabama and North Carolina. Preliminary estimates say the system was responsible for nearly 80 tornados in all.

Ned Perme, chief meteorologist at KATV Little Rock, Ark., agrees that the role of television meteorologists is evolving as new media alternatives supplement station’s on-air storm coverage. “It’s a different world than it was years ago,” he says. “There are too many distractions — cable TV, satellite TV. People are not paying attention [to stations’ coverage] as they did before.”

KATV offers a weather app and Weather Call 7, a robocall service that automatically phones more than 45,000 people in the area who have subscribed when they are in the direct path of a storm, he says.

Perme also took a more rudimentary approach. He asked viewers to call or text friends and family in Vilonia and Mayflower as the tornado approached, he says. His 29-year-old daughter, who was watching Perme on TV, took his advice to text a friend in Vilonia, who was not watching television and was unaware of the imminent danger, says Perme. That friend took shelter with her family, and when she emerged once the tornado had passed her grandparent’s home in Vilonia was gone.

KOAM offers an iOS and Android app that is linked into its WSI radar. “It’s pretty live,” says Heady, referring to the slight delay between the WSI radar scan and when it’s actually delivered to users of the app. “I’ve looked at it and compared it (to real-time radar sweeps). It maybe lags a minute and a half,” he says.

“We tag teamed our on-air coverage of the storm,” Heady says. “I had my weekend guy, when he was not talking on air, push every single warning that was coming out and push out radar images to both our Facebook and Twitter sites.”

Those social media warnings and radar posts are especially important to people who have lost power and can’t tune in with their televisions, he adds.

Keith Monahan, chief meteorologist at KARK Little Rock, says Sunday’s tornado, which cut a path between Mayflower and Vilonia, illustrates how important simulcasting the station’s weather coverage online can be to viewers caught without electricity.

“The power did go out very early for folks who were watching our coverage [in the Mayflower-Vilonia storm path],” he says. “We have one employee up in Vilonia who said the power went out about 12 minutes before the weather hit because it took out a distribution line in the southern part of the country. But they were able to watch the streaming coverage because cell phone towers were still working at that point.”

Monahan points out that the station’s streaming coverage can also be important for people on the road.  Some travelers on I-40 in Arkansas drove directly into the tornado, which to them looked like a wall of rain, says Monahan. “If drivers are not familiar with the area … they don’t know what county they are in,” he says.

Mike Smith, senior vice president at AccuWeather, says the public was better informed about the recent  tornados than the killer tornado that struck Joplin three years ago. Smith chronicled the errors made by the National Weather Service during that emergency in his book, When the Sirens Were Silent.

This time around, the National Weather Service “did a very find job” of updating warnings of Sunday’s tornados, says Smith. “At about 2:45 p.m., the National Weather Service updated its ‘Severe Weather Outlook’ from a moderate risk to a high risk warning for Arkansas. And then a few minutes later they put out a rare ‘Particularly Dangerous Situation’ tornado watch,” he says.

“Broadcasters got the right information instead of misleading information like in Joplin,” he says.

While not identical, Sunday’s tornado in Arkansas and the 2011 Joplin tornado were super tornados in terms of wind speed and size, he says. While the 2011 tornado killed 161 people, this week’s killed only 13, he says.

Of course JD Shaw and FormerGM will point to this as weather hype instead of savings lives.

Well of course..as we all know, mankind as we know it today would cease to exist without the Tv Weatherman to save us.

Thanks for proving my point, while ignoring how deaths from these disasters have been minimized to a handful from hundreds (if not thousands) from several generations ago.

BD, you should not be so cynical, where lives could be at stake. One day, yours could be one of them. The only way to accurately predict where a tornado will land and how much damage it will do, is to have a direct pipeline to God. If you don’t have one, I wouldn’t be so judgmental. We use what we’ve got. It ain’t perfect, but it’s better than what we had.. and it’s a heck of a lot better than nothing.

Though severe weather social media posts are helpful to many, on-air meteorologists must be careful not to imply to viewers that just following them on social platforms will keep them safe. In this age of Facebook throttling up to 95% of a brand’s page posts and a user’s Twitter feed being overwhelmed with tweets, they very well would never see a life saving weather alert. Provide and point viewers to products (texting, robocalls, websites, mobile apps) that will always get the weather alerts to them immediately.

KOAM’s done an absolutely great job with their web site in general. They’re a good model for how a small market station can make a consistent positive impact on the community, and there’s never a more critical time than in tornado season, there is the middle of tornado alley. Hats off to their web manager-news director-metrologists-and GM.