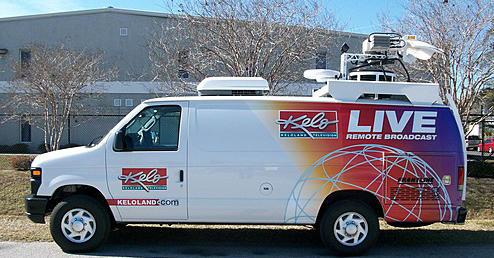 With the news that Ford is discontinuing production of its E-350 vans (above), the workhorse of ENG vehicles, suppliers are looking for replacements. Among the options are Chevy's HD-3500, Nissan's NV and Ford's new full-size Transit.

The lot at Frontline Communications in Clearwater, Fla., today is filled with Ford E-350 vans waiting to be outfitted with ENG gear for TV station customers.

But Frontline VP of Sales Jonathan Sherr and broadcasters across the industry understand that won’t be the case for much longer. Come next year, Ford is discontinuing its iconic Econoline that now accounts for 95% of the ENG trucks on the road.

With the E-350 out, broadcasters will have to transition to Ford’s new full-size Transit (not to be confused with the current Ford Transit Connect) or look to other manufacturers.

“To us, everything about the E-350 was perfect for building an ENG truck,” says Sherr, who plans to stock up on more E-350s before they stop rolling off the line, in order to service broadcasters through at least 2015. “But there are other very capable vehicle models out there today that are going to work well in the industry.”

In addition to the Ford Transit, the Chevrolet Horizon HD-3500 and Nissan NV are expected to compete to become the next ENG workhorse. SUVs, like the Subaru Forester and Ford Explorer, will also likely become more common supplementing the larger vehicles.

Some of the vendors say the end of the E-350 is a blessing in disguise because it pushes them to innovate.

“The E-350 has kept its core design since the 1980s,” says Tom Jennings, president of Accelerated Media Technologies,  a leading ENG truck outfitter.

“It was a grossly under-engineered vehicle anyway, but it was the devil everyone used, so it was the devil that everyone went to. The fact that Ford discontinued it opened up the options so that broadcasters could look at other vehicles.”

“It’s forcing everybody to look at different options,” says John Heaney, president  of Shook Mobile Technology, another ENG truck vendor. “And it’s going to be a challenge. There are customers that want 4×4 conversions still, and the E-350 was built really well for that. Everyone’s moving to a smaller platform, so we need to adapt.”

In terms of size and payload, the Chevrolet HD-3500 comes closest to the E-350, although it’s slightly shorter. The clean diesel vehicle features a 6.0L FlexFuel8 V8 engine with 260hp and 525 lb.-ft. torque. It offers 96RU of rackspace and a 15,000btu roof-mounted AC system.

Since this year’s NAB Show in April, Jennings says his company has already sold more than 100 HD-3500s.

“It has become the No. 1 vehicle we’re building,” he says. “It was single-handedly the most successful product launch we’ve ever had in our history.”

Recent customers of the HD-3500 include WNBC New York, which purchased four, and Meredith Local Media Group, which is starting a group-wide transition from Ford to Chevy.

Ford’s Transit is expected to be available in January 2014. Depending on the model, the inside height ranges from six feet, eight inches to nearly nine feet. It’s expected to have a payload of 4,650 pounds, with a gas or diesel option.

Sherr says Ford has been slow in getting prototypes to ENG vendors, but hopes to see some in his shop by year’s end. In the meantime, he says Nissan’s NV is an attractive alternative as it is similar in price and payload.

“There hasn’t been a new ENG design in forever, so we brought in every van known to man, no matter where it was built, put it through a lot of testing, and we fell in love with Nissan’s new van,” Sherr says.

Nissan’s NV is similar in build to the Mercedes Sprinter, a taller van that’s used by Fed Ex. It’s tall enough for a six footer to stand up in without ducking, Sherr says. It offers a full-frame V-8 chassis and is wide enough for a reporter to sit down at a desk and computer for editing.

While Nissan is a Japanese company, the vehicle is assembled in Canton, Miss.

The NV, which Frontline first showed at the NAB Show in April, has been tested at stations in New York and Washington, and Sherr says he’s received 30 commitments this month alone.

“We opened our order books for this vehicle in August and it’s by far our best seller right now,” he says.

Broadcasters say the industry is ready for something new and E-350’s exit opens the door.

Larry Oaks, VP of technology at Meredith, for instance, says Ford’s discontinuation of the E-350 helped him discover Chevy’s HD-3500 and experiment with new technology, specifically with Mobile Electric Power Solution, which is an alternator that helps power the whole vehicle for several hours while the vehicle is idled.

“You can buy it in a gas, but we chose to go diesel for not only better gas mileage, but it also allows us to experiment with moving away from generators in the vehicles,” he says.

Diesel and the lack of a generator also cut down on heat in the vehicle, Oaks says.

“Instead of putting up a 42-foot, or 52-foot mast, maybe they’re using a pop-up stick, or a short mast in a Ford Explorer, or maybe a one-meter satellite dish on a Chevy Suburban,” he says. “If Ford truly does retire the E-350, I think the industry in general is at a point where we don’t need the E-350 anymore.”

That being said, Hanson isn’t ruling out making one last round of E-350 purchases in the coming year because his news crews are used to how the vehicle drives, and repair services are readily available.

“With Ford, there are dealerships everywhere, parts are always available — every garage on the planet can work on them,” he says. “From a cost perspective, you get a pretty good bang for your buck.”

This is Part 3 of a three-part special report. Part 1 appeared Tuesday and Part 3 on Wednesday. Read the complete series here.

I don’t know why stations wouldn’t use the smaller and cheaper and more frugal Transit Connect. Why do you need a massive van anymore? Use a MEPS power system and get 20+ MPG. Much easier to drive, too. I just don’t get it. I for one am sick of the huge 1-ton vans.

Thanks, it’s quite informative