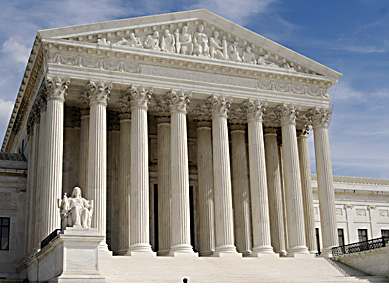 In a 5-4 decision today, the Supreme Court strikes down limits on the aggregate amount that Americans can donate to all candidates in an election cycle — a move that is likely to increase the amount of campaign money that is raised and spent. However, the ruling does not disturb the cap on contributions to individual candidates.

The court struck down limits Wednesday in federal law on the overall campaign contributions the biggest individual donors may make to candidates, political parties and political action committees.

The justices said in a 5-4 vote that Americans have a right to give the legal maximum to candidates for Congress and president, as well as to parties and PACs, without worrying that they will violate the law when they bump up against a limit on all contributions, set at $123,200 for 2013 and 2014. That includes a separate $48,600 cap on contributions to candidates.

But their decision does not undermine limits on individual contributions to candidates for president or Congress, now $2,600 an election.

Chief Justice John Roberts announced the decision, which split the court’s liberal and conservative justices. Roberts said the aggregate limits do not act to prevent corruption, the rationale the court has upheld as justifying contribution limits.

The overall limits “intrude without justification on a citizen’s ability to exercise ‘the most fundamental First Amendment activities,'” Roberts said, quoting from the court’s seminal 1976 campaign finance ruling in Buckley v. Valeo.

Justice Clarence Thomas agreed with the outcome of the case, but wrote separately to say that he would have gone further and wiped away all contribution limits.

Justice Stephen Breyer, writing for the liberal dissenters, took the unusual step of reading a summary of his opinion from the bench.

Congress enacted the limits in the wake of Watergate-era abuses to discourage big contributors from trying to buy votes with their donations and to restore public confidence in the campaign finance system.

But in a series of rulings in recent years, the Roberts court has struck down provisions of federal law aimed at limiting the influence of big donors as unconstitutional curbs on free speech rights.

Most notably, in 2010, the court divided 5 to4 in the Citizens United case to free corporations and labor unions to spend as much as they wish on campaign advocacy, as long as it is independent of candidates and their campaigns. That decision did not affect contribution limits to individual candidates, political parties and political action committees.

Republican activist Shaun McCutcheon of Hoover, Ala., the national Republican party and Senate GOP leader Mitch McConnell of Kentucky challenged the overall limits on what contributors may give in a two-year federal election cycle. The total is $123,200, including a separate $48,600 cap on contributions to candidates, for 2013 and 2014.

Limits on individual contributions, currently $2,600 per election to candidates for Congress, are not at issue.

Relaxed campaign finance rules have reduced the influence of political parties, McConnell and the GOP argued.

McCutcheon gave the symbolically significant $1,776 to 15 candidates for Congress and wanted to give the same amount to 12 others. But doing so would have put him in violation of the cap.

Nearly 650 donors contributed the maximum amount to candidates, PACs and parties in the last election cycle, according to the Center for Responsive Politics.

The court did not heed warnings from Solicitor General Donald Verrilli Jr. and advocates of campaign finance limits that donors would be able to funnel large amounts of money to a favored candidate in the absence of the overall limit.

The Republicans also called on the court to abandon its practice over nearly 40 years of evaluating limits on contributions less skeptically than restrictions on spending.

The differing levels of scrutiny have allowed the court to uphold most contribution limits, because of the potential for corruption in large direct donations to candidates. At the same time, the court has found that independent spending does not pose the same risk of corruption and has applied a higher level of scrutiny to laws that seek to limit spending.

If the court were to drop the distinction between contributions and expenditures, even limits on contributions to individual candidates for Congress, currently $2,600 per election, would be threatened, said Fred Wertheimer, a longtime supporter of stringent campaign finance laws.

Donations for political races could have better uses for the local communities.
If the gutless lobbies, politicians, lawmakers, scotus, and congress will agree for the candidates to debate on PBS and all their affiliates in the nation. They get tax payer monies. Do it there……otherwise you are allowing a proven corrupted system to elect our future representatives.