Teleprompters: Not Just For Studios Anymore 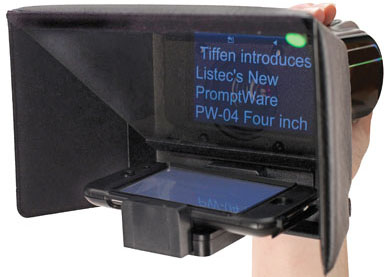 Smaller, lighter and less expensive portable systems, including ones that use iPads and iPhones as displays, have expanded the market greatly. Some recent innovations in teleprompter design from nonbroadcast uses are filtering back into TV through the newsrooms of smaller-market stations and a new-media industry creating content online — evidence that the teleprompter can now be used anywhere. However, for upmarket broadcasters that value reliability over all else, larger, conventional systems are still in demand.

Teleprompters are shrinking and integrating some familiar technology, including LCD and LED flat-screen displays and Apple’s iPad and iPhone. Yup, there’s an app for the teleprompter, too.

Some of these recent innovations in teleprompter design can be traced to the fact that these products are being used more widely in other industries. Outside of broadcasting, new markets have developed teleprompter technology for corporate presentations and churches. These updates are filtering back into broadcast through the newsrooms of smaller-market stations and a new-media industry creating content online — evidence that the teleprompter can now be used anywhere.

“A conventional teleprompter was usually too big to lug into the field, but more and more reporters are using their laptops as teleprompters — then came the iPads and iPhones and smaller teleprompters,” says Ray Blumenthal, a partner of Listec, a division of Tiffen Co., where he is VP of broadcast systems. “It’s really created a new market for portable teleprompters in broadcasting over the last two years.”

Blumenthal says some broadcasters are using the portable, iPad-integrated teleprompters in the field, but there are other uses. Robert Winsor, SVP of CBS Media Group, the group that’s responsible for broadcast and online publicity for all of the network’s entertainment programming, says the smaller teleprompter comes in handy when he needs an actor to record a promotion on the fly.

“We use it sparingly, but it’s effective for those last-minute decisions to have someone read a promotion,” he says. “It’s also cost effective. If you want to rent a teleprompter for the day, it could run you $800. This solution is inexpensive, only a couple hundred dollars.”

Autoscript and Autcue, the companies with the largest market share in the broadcasting industry, have developed lighter-weight systems using thin-panel LED displays.

“It’s all about lighter and brighter,” says Scott Cannon, vice president of sales at Autoscript. “The biggest changes have been the move to LED and LCD and away from CCFLs (cold cathode fluorescent lamps).”

Autoscript also plans to enter the prosumer end of the market by 2013 using a completely separate brand. YouPrompt bills itself as a line of cost-efficient 8-, 12-, 15- and 17-inch prompter systems designed for individuals, production studios, corporations, churches and government or educational institutions.

“Cameras are getting smaller and there’s more remote broadcast work being done in different kinds of environments, so the kinds of products they need and can afford means we have to adapt designs for that,” says Cannon. “But the basic concepts of teleprompting aren’t changing. And while systems can get lighter and brighter, there are certain limits that you can’t change, such as the size of the displays — they still have to be readable at certain distances.”

As more news stations take broadcast or publish their work from the field, teleprompter manufacturers have responded by integrating more off-the-shelf media tools with traditional hardware components. An example is Autocue’s relatively new lineup of portable systems that utilize Apple’s iPad and iPhone as displays. The displays integrate with an app that users download on the device.

Aaron Brady, Autocue managing director, says the growing importance of ENG-type production in other sectors, including corporate and event production, has striated the industry into a kind of good-better-best proposition, with highly affordable prosumer types of products often based around tablets and smartphones, a middle tier aimed at small to midsize O&Os and affiliates, and a top rank aimed at networks with products that can cost as much as $5,000 per unit.

Smartphone and tablet teleprompter systems have brought drastically different price points to this product category. Listec’s iPhone- or Android-based system lists for $319 while its iPad model goes for between $749 and $1,099. Portable systems can creep up in price when features such as tally lights and talent monitors are added, but they’re still well below the $5,000 to $15,000 price of conventional teleprompters.

The higher end of the market for teleprompters still has plenty of life in it, but the new generation of lightweight teleprompters is finding their way into studio applications. Brady at Autocue says the center-of-balance on newer robotic-camera pedestals is extremely sensitive to any additional weight, making lighter, LCD-based teleprompters a good way to add that capability to a camera position.

Another kind of adaptation has been the integration of the teleprompter with the LAN inside the newsroom. This makes it, says Autocue’s Brady, essentially a node on that network, with scroll controllers connected via USB, instead of the previous serial bus, to Linux-based workstations that generate content locally.

But the arrival of portable teleprompters poses a challenge in terms of connectivity with a studio network when they’re used in the field. Additionally, Apple’s iPad and iPhone have purposely limited interfaces. For example, neither have a USB port. Some reporters and producers are using email to send copy to the devices; Listec’s Blumenthal says he’s been working with streaming systems developer Teradek to adapt one of that company’s smaller streaming solutions for his portable teleprompters.

“I think we’ll see a Wi-Fi streaming-based solution by NAB, one that can keep the teleprompter content connected to the newsroom systems when the teleprompter and the camera are working in the field,” he says.

Mark Ditmanson, a principal at Campbell, Calif.-based Prompter People, whose target markets include corporate, education and religious clients, says that his company has developed a teleprompter specifically designed to accommodate the movement of PTZ [pan/tilt/zoom] robotic cameras that appeal to a range of markets, including small broadcasters. Features such as wireless remote controls that allow on-camera talent to control their own scrolling play into the “one-man band” paradigm that Ditmanson says is well-suited not only to corporate markets but also to the widening range of TV, such as regional sports networks.

“Corporate, education and other markets have the same kinds of needs that local and regional ENG and sports do — lightweight, ease of use, quick setup/tear down and software that works on consumer platforms like Apple and PC,” he says.

But the larger conventional teleprompter systems are still perceived as bulletproof, and will likely remain the first choice for upmarket broadcasters that are looking less for innovation than for utter reliability and predictable operation.

“There are more people using teleprompters, and that’s creating opportunities,” says Autoscript’s Scott Cannon. “But the networks and the larger stations want the bells and whistles, and they want to know it works every time. That’s what they will always need.”