Tests Show ATSC 3.0 Is Up To Mobile Delivery 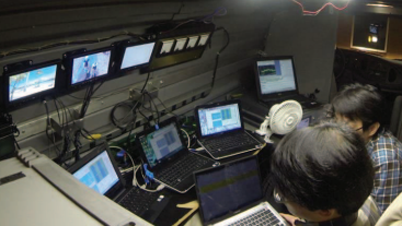 Tests conducted in Cleveland this summer revealed that ATSC 3.0 can support multiple simultaneous services modes, such as high-data-rate HD and 4K, and highly robust signals for mobile delivery. Wayne Luplow of Zenith R&D Labs recently presented the findings at the IEEE Broadcast Symposium and submitted them to the FCC. Above, engineers inside the van used for the comparison testing of 3.0 versus Mobile DTV (A/153) reception.

Broadcasters evaluating mobile delivery as a business model to pursue in an ATSC 3.0 future have something to cheer about based on the results of a test this summer in Cleveland.

The standard is capable of delivering an OTA mobile signal to receivers on the go that is significantly better than Mobile DTV (A/153).

“We were very pleased with the performance,” says Wayne Luplow, VP at Zenith R&D Labs in Lincolnshire, Ill.

Luplow, who presented the test results at the IEEE Broadcast Symposium in mid-October, says the robustness of the 3.0 signals delivered to receivers in a test vehicle that traversed the Cleveland area was not particularly surprising.

“We knew the [3.0] technology was very close to what we had done with the proprietary Futurecast system [a forerunner to the next-gen TV standard],” he says. “So we weren’t surprised, but pleased.”

Washington law firm Wiley Rein submitted Luplow’s presentation of the findings Nov. 23 to the FCC’s Office of Engineering and Technology (OET) on behalf of LG Electronics, Zenith Electronics and GatesAir.

The OET requested the data as it offers guidance to the commission on an anticipated Notice of Proposed Rulemaking leading to the eventual authorization of ATSC 3.0, says John Taylor, VP public affairs and communications, at LG Electronics.

Testing was conducted with 3.0 and 1.0 A/153 signals transmitted from Tribune Broadcasting’s Fox affiliate WJW on ch. 31.

Data was collected for the 3.0-A/153 comparison at tens of thousands of places —one sample every second — as the van travelled along different routes with challenging reception conditions, such as amid and behind hills, through valleys and around curves. Samples were also taken at speeds ranging from a dead stop to about 65 mph, and the vehicle travelled up to about 60 miles away from the transmitter at the farthest, Luplow says.

As the van was outbound on each route, engineers at the transmitter site would transmit in three simultaneous 3.0 transmission modes: one physical layer pipe (PLP) carrying 14.3 Mbps at a signal-to-noise ratio of 14 dB; another carrying 1.1 Mbps at 3.3 dB SNR; and a third carrying 0.5 Mbps at -1.3 dB SNR.

When the driver reached the end of a given route, he would call back to the transmitter site and instruct the engineers there to discontinue the 3.0 transmission and fire up 1.0 transmission — both A/53 fixed and A/153 Mobile DTV. The van would then retrace the original route back to its point of origin, collecting 1.0 data along the way for comparison.

“The 0.5 Mbps [3.0 signal] provided the greatest robustness for the test and was superior to A/153 [robustness],” Luplow says.

After comparing the data points from the 3.0 and 1.0 collection efforts, test results showed that in the most robust 3.0 mode, more than 80% of the transmission received was “clean,” or error-free; about 13% had, as Luplow describes, “some errors that would cause you to get data that could be marginal”; and about 5% was all error.

That compares quite favorably with the A/153 test results, which found that only about 67% was error-free and more than 20% suffered some errors.

The apples-to-apples comparison (3.3 dB SNR 3.0 vs. 3.4 dB SNR A/153 signals) showed the 3.0 signal to produce about 70% error-free results, slightly better than A/153’s 67% error-free tally. The biggest difference between the performance of the two appears to be the larger amount of A/153 data that was considered marginal, according to the findings.

One of the most important results of the testing was that “highly reliable in-vehicle mobile reception was achieved,” Luplow’s presentation says. That, Luplow adds, has positive implications for the automotive industry.

Another is that the apples-to-apples comparison of both found that mobile 3.0 reception was slightly better than A/153.

Luplow bristles at the notion that the failure of Mobile DTV (A/153) to take hold commercially had anything to do with reception issues.

“A/153 didn’t go because of technical performance, but everything to do with business,” he says. “I would tell you we did a lot of testing with A/153 in various places. It worked very well in many different mobile modes.”

With slightly better reception performance of a 3.0 signal with comparable SNR and demonstrably more robust performance achievable, mobile 3.0 signal delivery is a viable service for broadcasters to consider in the future, he says.

What’s more, the tests revealed it is realistic for broadcasters to transmit in multiple transmission modes at the same time.

ATSC 3.0 gives broadcasters a means to deliver a robust signal for mobile and deep indoor reception as well as services requiring high-capacity data rates, such as 4K, at the same time, he says.

“We wanted to verify for the world what ATSC 3.0 can do, especially for mobile reception,” he says. “That’s exactly what we’ve done; 3.0 worked great.”

“A/153 didn’t go because of technical performance, but everything to do with business”..

And unless a meaningful business opportunity exists, 3.0 won’t either.

Yep.. and just what those stations who still don’t produce local HD nor pass network 5.1 look forward to.