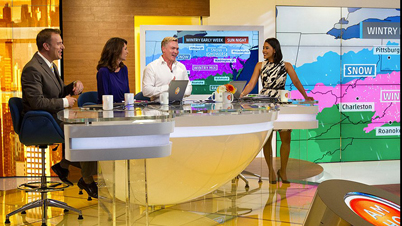 As prices for the technology have come down, TV stations and others are able to create graphic templates for video walls and have those graphics pushed to the displays automatically from a predetermined rundown. Here’s a rundown of some of the most popular video wall controller vendors today in the broadcast space. This is Part Two of a four-part Special Report on news sets. See Part One here.

Video wall controller technology has become more affordable and easier to use in recent years, putting it within reach of TV stations in medium markets as well as some smaller cable networks.

Early adopters of video walls like major networks generally relied on expensive controller/processor units from video wall specialists like Christie and Barco to upscale images and direct them to displays. Prices started around $60,000 and easily topped $100,000.

Now there are cost-effective controller options, including systems from Vizrt, Avid and tvONE, which entered the broadcast market a few years ago.

That allows journalists to create graphic templates for a video wall and have those graphics pushed to the displays automatically from a predetermined rundown.

“Now it’s a really great tool to enhance and customize a story, and help viewers connect with what’s happening,” says Jason Effinger, chief digital and technology officer for Gray Television, which has installed video walls in eight stations, using either Vizrt or tvONE controllers, over the last year and a half. “You can do so many things next to either single or double talent.”

Smaller cable networks have a similar focus on cost and ease of use when investing in video walls.

When RFD-TV hired CNBC veteran Gary Kanofsky to update its on-air look in 2014, he set about redesigning its Nashville studio with three video walls, and two large roll-around monitors.

“I wanted a single point of control for everything, and I wanted to be able to map any router source to the walls very easily,” says Kanofsky, RFD-TV’s chief content officer and EVP of news.

He was familiar with Christie’s proven Vista Spyder product, and liked it. But it needed a dedicated operator to run it, which wasn’t in the budget.

So Kanofsky started looking in a different direction, and wound up selecting Avid’s TD Control system (then part of Orad before its 2015 acquisition by Avid), which combined image processing and real-time graphics in one system and interfaced with RFD-TV’s existing newsroom computer, server and automation systems.

TD Control could also be easily run by the existing technical director via a touchscreen panel.

Here’s a rundown of some of the most popular video wall controller vendors today in the broadcast space:

Avid Technology became a player in the video wall market with its June 2015 acquisition of Orad, an Israel-based supplier of 3D real-time graphics and virtual set technology, which had marketed controller since 2012.

The company has seen strong uptake for the product in the United States, says Elad Dadon, Avid’s principal product manager for TD Control.

Dadon says that TD Control’s advantage is that it is one of the few systems “to combine the two capabilities of video processing and real-time graphics in a single solution. That’s not only to fill all the technical requirements [for a processor], to handle any resolution, any shape, any size, any orientation. But also to do real-time graphics, take in live video inputs and data from different databases, everything you need to make a meaningful story.”

Because TD Control came from the live broadcast environment, it also integrates naturally with other pieces of the production chain, such as production switchers, automation systems and newsroom computers, which allows journalists to create graphics templates for the video walls.

TD Control will integrate to any video wall vendor, and Avid has recently done projects with Primeview and Leyard displays.

“The market has been great for the past few years,” says David Jorba, president of Vizrt Americas.

By creating presets with the Viz Engine software, a station can do any sort of graphic layout on a video wall. Each engine can have 8 DVI outputs to cover eight single monitors or send a single image to an 8K video wall.

“We have two types of usage,” says Jorba. “If a station already has a Viz infrastructure, they can create their own graphics for the video wall and play real-time graphics with full resolution.”

“On the other hand, a couple of customers have no Viz infrastructure but use Multiplay for the video wall [with the product simply playing video and graphics as a traditional image processor],” he adds.

The Multiplay workflow can also output Vizrt newsroom graphics and video for display on a video wall, he says.

The market for video walls is “potentially every local station,” says Jorba. But given the costs, he estimates there are “about 500 local stations on the spectrum of a probable buyer for a video wall.”

tvONE, which has U.S. headquarters in Erlanger, Ky., and manufacturing and R&D facilities in the U.K., began selling its CORIOmaster video wall controller to broadcasters about two and a half years ago.
Between 75 and 100 stations use its controller for their video walls, including Fox O&O WTVT Tampa, Fla., and CBS O&O KDKA Pittsburgh, says Jonathan Begleiter, regional sales manager, Southeast for tvONE.

Price is probably the biggest reason for the CORIOmaster’s success, he says. The unit starts at around $30,000 for a full-featured, 4RU unit with 28 DVI I/Os that can manage up to four video walls.

“It’s a hardware-based video wall processor,” says Begleiter. “You setup the software, but it’s not manipulating video in software, it’s doing it in hardware,” he says.

Each CORIOmaster board delivers a scaled output, he says, adding customers are buying a backplane they can populate as needed.

tvONE also sells a scaled-down, 1RU version called the CORIOmaster Mini with up to 10 DVI I/Os that starts around $16,000.

Stations typically run their video walls at 1080p resolution, although some use 720p, and the use of 4K as an input for each monitor is the exception, he says.

However, Begleiter notes that feeding a 1920 x 1080p signal to each of the four quadrants in a 2 x 2 video wall is effectively 4K across the entire display.

Leyard manufactures video wall displays and controllers. Major networks, such as NBC, CNN and Bloomberg, use them.

The Chinese firm, best known for its fine-pitch LED displays, gained expertise with image processing and LCD displays when it bought Oregon-based Planar in November 2015.

To date, fine-pitch, seamless LED video walls have been too expensive for most broadcasters, but with prices falling sales to local affiliates may soon expand, Davis says.

Plus, broadcasters need not pay for super-high LED resolution when a pixel pitch of 1.6 to 1.8 mm is sufficient for their application, Davis says.

Leyard’s video wall processors, such as its Visual Control Center, deliver “exceptional scaling and source management” and the flexibility to work with third-party graphics systems and other production tools, Davis adds.

This is Part Two of a four-part Special Report on news sets. You will be able to read the other parts here.