Back to TVNewsCheck Home Print this page
IBC 2014

The Inevitability Of IP Becomes Clear At IBC 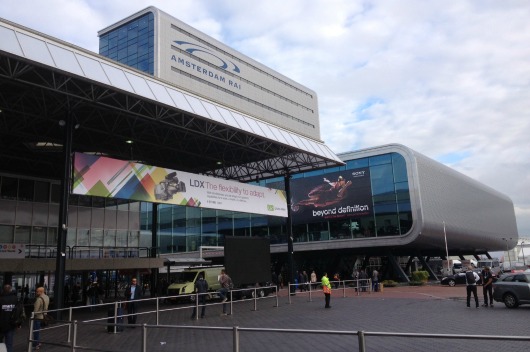 This year’s tech gathering in Amsterdam was one of those rare shows where the sense of a major changeover was palpable.  It will likely be remembered as the breakout event for IP as the enabling technology for a new way of looking at how the human and technology resources needed to acquire, prepare and distribute programming should be organized.

But periodically, a show becomes the venue for a technology to break out and take the industry where it needs to go. Sometimes that happens when a new technology explodes onto the scene seemingly out of nowhere. Other times it occurs when the business realities of the industry and advancements in a given technology align in such a way that an existing technology shifts from a supporting player to a starring role. Either way, these conventions are rare and significant.

This year’s IBC in Amsterdam was one of those rare shows where the sense of a major changeover was palpable.  It will likely be remembered for some time as the breakout event for IP as the enabling technology for a new way of looking at how the human and technology resources needed to acquire, prepare and distribute programming should be organized.

To be sure, IP has touched television for a long time. Companies like Audinate, which had its Dante audio networking technology integrated in the broadcast audio products of some 40 companies exhibiting at IBC, took the plunge into IP for transport of audio signals in a professional mixing environment in 2006.

And others, like TVU Networks, Dejero and LiveU more recently have pointed the way to the potential of IP for contribution with their bonded cellular newsgathering products.

But what transpired at IBC was IP-driven solutions for broadcast achieved takeoff velocity. The message was clear and direct: At a fundamental level, the technology enabling IP for broadcast has matured to the point where it can take broadcasters where they need to go.

One of the many examples at IBC was Michael Tomkins, CTO of Fox Sports Australia, who laid out how IP-based production has brought about a total rethinking of what a broadcast center needs to be. “FOX Sports came up with a core digital workflow,” he said of the broadcaster’s new facility in Sydney. “Broadcast and sports are abstractions of that.”

All any of the 54,420 people stopping by one of the 1,500 exhibitors at the RAI Convention Center had to do is take a quick look around to notice that something big was afoot.

Whether it was the bold signage Cinegy had hung in a well-traversed walkway proclaiming “SDI must die” and be replaced with IP transport, technical sessions with names like “The Death of SDI? The Promise of Complete IP-based Production,” or multiple exhibits on the show floor, it was clear IP is achieving critical mass.

Charlie Vogt, CEO of Imagine Communications (formerly the non-transmission side of Harris Broadcast), said at the company’s IBC press conference that IP technology and what it enables in the form of a cloud-based, virtualized workflow and software-defined networks are at the heart of where he is taking the company. “This was a company [Harris] that needed to be integrated,” he said.

The goal is to offer a path for broadcasters to integrate islands of IP into existing SDI infrastructure as they evolve toward a full-on IP approach, and to enable use of common off-the-shelf (COTS) computing platforms, such as the Blade servers deployed by Microsoft as part of its Azure Media Services data centers, to handle media-related preparation and distribution, he said.

At IBC, Imagine announced it is collaborating with Microsoft to deploy its Zenium software-defined workflow management platform on Azure.

Grass Valley featured prominently in its booth a tech demo of a software-defined network controlling off-the-shelf IP switches as well as an SDI router to create a hybrid environment. Boromy Ung, Grass Valley VP, monitoring and control, said the demo underscored the fact that it is possible for IP switches to be integrated into today’s broadcast workflow.

Ung said he detected a shift in the thinking of broadcasters about IP at this year’s IBC. “Having attended this show in previous years, and NAB, I can tell people are more aware and educated in terms of the IP transition,” he said. “Two years ago they never would have said, ‘My production environment will go IP.’ But now they are more open to it. There’s an appetite for the subject.”

Snell, too, devoted booth space to its IP play — the xStream, the first product to be part of its new Quasar XS line. Robert Rowe, managing director of live TV at Snell, said xStream provides a real-time platform for IP processing that runs on COTS hardware and gives broadcasters a way to run the same software production tools they already know on these generic computers.

Snell’s xStream falls in line with strategic steps the company has been taking to position for a future, IP-based broadcast world. At the 2014 NAB Show, Snell and Cisco first demoed integration of Cisco enterprise-grade routers into a broadcast routing environment. At IBC, the companies once again showed Cisco routers at work making switches between video sources with less than 1ms of latency —essentially switching in real time. Rowe said the latency is so small that Snell engineers in the lab actually had trouble measuring it.

Harmonic’s approach focused on the playout and distribution side of the broadcast equation. It introduced multiscreen packaging and origination capabilities for its VOS software-based media procession platform. The new capabilities add to the ingest, compression, graphics, branding and delivery functions introduced at NAB.

Tom Lattie, VP products, Harmonic, said virtualized packaging and origination capabilities, such as those enabled by the latest VOS introductions, make it more affordable  — and thus more likely — broadcasters will bring up second channels or over-the-top feeds for special events .

“Building a traditional master control room is expensive,” he said. “Virtualization fixes the equation. It essentially becomes MRC in a box,” he said.

Even other technology developments taking a part of the spotlight at IBC 2014 had an IP angle. For example, 4K — while still beyond the reach of U.S. broadcasters’ over-the-air transmission capabilities — is being planned for in the work being done on ATSC 3.0 and was discussed during a session on future TV technology produced in association with the IEEE.

During his part of the session, Youngkwon Lim, research engineer, principal, Samsung, said the goal in developing ATSC 3.0 standards from the management protocol point of view is to deliver files using an IP-enabled hybrid service.

At another session, Claus Pfeifer, strategic marketing manager live production, Sony Professional Services, pointed out that the prospect of routing high-bandwidth 4K signals around a TV infrastructure via SDI is a good reason for broadcasters to consider IP.
While IP offers a solution to many of the production, routing, distribution and transmission challenges facing broadcasters, initial deployments in existing facilities are likely to be gradual. Clyde Smith, SVP, new technology, Fox Network Engineering and Operations, advised those attending “The Death of SDI” session to go after “the low-hanging fruit” for their first forays into IP.

Longer term, however, to reap the efficiency, flexibility and economic benefits IP offers ultimately means SDI must die. As John Footen, AVP, broadcast and advertising, Cognizant, an IT consulting firm, said during the same panel discussion: “To get to where we want to go with the cloud and ancillary technologies that provide flexibility and the ability to provide new business models, we are going to have to adopt IP. SDI simply can’t do it.”

Hooray! It’s about time. But will the broadcasters get on board or will they continue to drag their feet, is the real question. It is likely that – once again – the rest of the world will move well ahead of the U.S. in IP delivery while the legacy media here dithers and frets. It will be a real shame if that happens and does the consumer a disservice.