Back to TVNewsCheck Home Print this page
NEWSTECHFORUM 2017

The Skies Are Clearing For News Drones 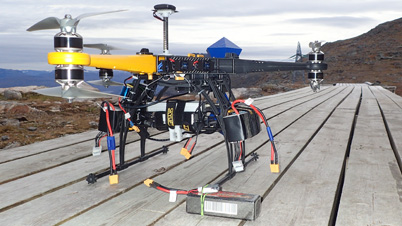 Looser rules plus technology improvements should spur broader adoption of the newsgathering tool.

An easing in regulations from the Federal Aviation Administration (FAA), improved aircraft technology and more accessible training are all helping to make drones easier to use by television stations for aerial coverage, according to drone experts speaking at TVNewsCheck’s NewsTECHForum in New York on Tuesday.

The panel discussion “State of the Art: Drones & News Photography,” moderated by TVNewsCheck Editor Harry Jessell, opened with some striking images of the damage in Rockport, Texas, after Hurricane Harvey hit there last August. The clip was provided by Measure, a for-hire drone services company based in Washington, that provides freelance coverage to stations and also trains station personnel in drone operation.

“What I think drones are particularly good at is providing perspective and access,” Ollwerther said.

Sinclair Broadcast Group would agree, as it started its “Skyview” drone program last year and now has 80 trained videographers across 34 markets.

Jeff Rose, Sinclair’s chief UAS pilot and the man in charge of the group’s drone program, showed an on-air promotional video from Sinclair’s WRGT Dayton, Ohio, which opened with shots of the damage from a round of tornados last summer. The segment then went on to explain to viewers how the Skyview drones work and the training and safety measures undertaken by the station, such as sending two videographers with each drone, one to fly it and one as a spotter (Sinclair follows this model across the group).

The second video Rose presented was from KRXI Reno, Nev., which used a combination of a drone and a bonded cellular unit in a news vehicle to give viewers a unique look at a newly constructed freeway outside Carson City, Nev. The segment opened with a reporter describing the new freeway in “live and drive” mode, speaking to a camera as she drove down the freeway, then shifted to an overhead drone shot showing the news vehicle in motion. The drone shot then pulled back to give a sweeping panoramic view of the freeway and surrounding mountains, an image which could easily have come from a helicopter.

Perhaps the prettiest part of the picture, however, was a small graphic bug showing the segment’s sponsor, Reno-Tahoe Auto Group, a local car dealer. Rose says that such sponsor bugs “absolutely” pay for the entire drone program at KRXI and other Sinclair stations.

The appeal of drones is obvious, particularly for small to mid-market stations. Drones start at around $5,000 and might run $20,000 when outfitted with the bonded cellular equipment. In comparison, a news chopper could run $1,000 per hour or up to $500,000 per year, which can be prohibitively expensive even when split among several stations in a market, said Rose when interviewed after the panel.

More stations may get into the drone game now that the FAA has relaxed what were initially very restrictive rules on flying drones for commercial use, said attorney Anne Swanson, a partner with Washington firm Wilkinson, Barker, Knauer, who specializes in unmanned aircraft regulations.

“After 40 years in communications law, I thought that field was highly regulated, but aviation is much more regulated,” Swanson observed. “I first had to learn the rules for manned aviation in order to do unmanned aviation.”

Before mid-2016, clients who wanted to use drones for commercial activities like broadcasting had to petition the FAA for an exemption of the Section 333 rules regarding small unmanned aircraft (UAS), which Swanson said was an expensive and time-consuming process.

The FAA relaxed its rules in June 2016. Part 107, as the rules are now known, allow drone operators who have passed a written test to take to the skies under certain parameters.

“With Part 107, you no longer had to put in an advance application before you can fly,” Swanson said. “The rules are still pretty limited, though.”

What’s not allowed: flying beyond a visual line-of-sight; flying over non-participating people; flying at night; flying multiple aircraft at once; and entering controlled Class G airspace, such as around airports.

“But you can apply for waivers, and in the last six months the FAA has been pretty active [in granting them],” said Swanson.

For example, to date the FAA has allowed 1,241 applicants to fly at night with anticollision lights. It’s tougher on other issues, granting only 10 waivers apiece for flying beyond line-of-sight or over non-participating people.

While Swanson would prefer to see FAA rules preempt state and local regulations over drone use, local authorities wanted a seat at the table. So the White House has now started a UAS Integration Pilot Program, under the auspices of the FAA and the Department of Transportation, where state, local and tribal governments can partner with private sector companies to foster safe drone usage.

Swanson is hopeful that data collected under the pilot program will help reform regulations such as flying beyond a visual line of sight, which the FAA seemed willing to do before law enforcement agencies weighed in with safety concerns.

For now, broadcasters like Sinclair have to be careful to follow the rules with safety always being top of mind. In addition to finding a safe place to launch and recover the drones, that sometimes also means shooting news events from an oblique angle in order to avoid going overhead civilians.

Since the FAA considers people covered by something to be protected, that can mean flying over woods, a pavilion or a building, says Rose, who adds that Sinclair will often use Google Earth to help plan safe drone locations.

“There are plenty of ways to cover stories,” he said.

They torture us on the screen and on line and in print, now we have to deal wit these humps in the skies?? Lord help us!!!

Glen, how many stations would you estimate are now using drones in their regular newsgathering ?