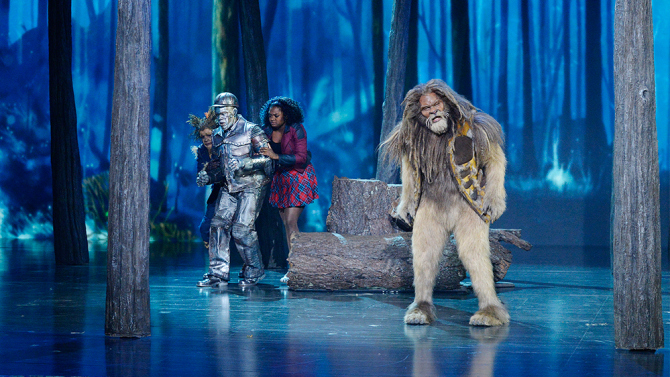 An exuberant, inventive The Wiz Live on Thursday night breathed new life into the notion of full-scale musicals on live TV with a happy serving of '70s soul and R&B, updated with a 2015 vibe. Starring a nice mix of pop music heavyweights, Hollywood stars and Broadway veterans, the show had a heart and playfulness that was missing from The Sound of Music Live with Carrie Underwood and Peter Pan Live. It even came in under three hours.

NEW YORK (AP) — The third time’s the charm for NBC.

An exuberant, inventive “The Wiz Live!” on Thursday night breathed new life into the notion of full-scale musicals on live TV with a happy serving of ’70s soul and R&B, updated with a 2015 vibe.

Starring a nice mix of pop music heavyweights, Hollywood stars and Broadway veterans, the show had a heart and playfulness that was missing from “The Sound of Music Live!” with Carrie Underwood and “Peter Pan Live!” It even came in under three hours.

The TV musical starred 19-year-old newcomer Shanice Williams as Dorothy, who got stronger as the night went on and who crushed the song’s finale, “Home;” a strong Queen Latifah as the Wiz with real stage presence; Amber Riley, a very blue good witch of the North who destroyed “He’s the Wizard;” and a perfectly evil Mary J. Blige as the Wicked Witch of the West.

But it was the guys on Thursday who really shined: Ne-Yo, as a winning Tin Man, moving fluidly despite a rusty suit, who beautifully delivered “To Be Able to Feel;” Elijah Kelley as an athletic, loose-limbed Scarecrow, who gave us a funky “You Can’t Win” while hoisted on a pole; and a dreadlocked, extremely furry David Alan Grier as the Cowardly Lion, one who gets seriously frisky with some poppies.

After a slowish, understated start in the Kansas countryside and an underwhelming tornado scene, the show got into a groove once the four pals eased on down the road. The four had real chemistry and each served the piece respectfully.

The show was adapted from “The Wonderful Wizard of Oz” by L. Frank Baum, with a book by William F. Brown, and music and lyrics by Charlie Smalls. The production opened on Broadway in 1975 and won seven Tonys, including best musical.

A 1978 movie version of “The Wiz” starred Diana Ross, Lena Horne and Richard Pryor. Michael Jackson co-starred as the Scarecrow, with Nipsey Russell as the Tin Man and Ted Ross as the Lion. “The Wiz Live!” honored its rich history and yet also added to it.

The live event was directed with good cheer and genuine spirit by Tony Award-winner Kenny Leon, and mixed songs from the stage and film. If anything, the high level of the performances exposed some weaknesses in the original songs and story.

New material was written by Harvey Fierstein, who included iPad and cholesterol jokes and a bad Spice Girls reference. A dynamite new song that served as the Act One closer, “We Got It,” was partly written by Ne-Yo and Kelley, a cool development that meant the Tin Man and Scarecrow got writing credits this time.

Choreographer Fatima Robinson’s dancing was modern and light, as when she created a joyful, smiling “Everybody Rejoice,” and a fantastic visual introduction to Emerald City complete with voguing, like a party at Lady Gaga’s.

This version of “The Wiz” is being planned for an extended life – on Broadway – and this telecast will surely boost that effort. It will join “Wicked,” which ran a commercial during the telecast, as if in welcome. There’s room for both these Oz tales, and for “The Wiz,” it will mean that Dorothy has once again returned “home.”

I tried to watch, really did, and there were some high points, but not enough. The Packers comeback was more entertaining.

We gave it a shot – but the commercial glut drove us away after an hour. Thankfully the DVR will solve that problem this weekend.

The biggest issue was TOO MANY COMMERCIAL BREAKS. It ruined the show. Next time, NBC needs to find one or two big sponsors who will present these with limited commercial introduction – at the beginning, intermission and the end, that way those that aren’t lucky enough to live here in the NY area, or visit, can better experience a theater experience. Compared to the previous two attempts, this was much more lively and fun. Though based on comments online, it seems some were expecting a musical version of the Wizard of Oz. This is not. They need to understand theatyer history.

Uh, there is no y in the word theater.

Set and production worked against some real talented actors and musicians.

The scope of this production was admirable, and like others have said, “I really tried to watch”. However, IMHO, the lighting was, well, strange. I felt it was dark and not complimentary. While the music was fine, the acting was very marginal. And the commercials….well, enough has been said.

Way too much commercial inventory and the lack of a live audience hurt the experience.

I don’t recall there being a live audience in ‘The Sound Of Music Live’ or ‘Peter Pan Live’ either.

“I really tried to watch.” “Too many commercials.” “Lack of a live audience.” This is the third time NBC has done this whole live musical event thing in recent years, and these three complaints weren’t found in either The Sound of Music or Peter Pan. There also were ‘too many commercials” and a “lack of a live audience” in the previous two productions, and I don’t recall seeing such complaints about them. Call it a hunch, but I think people are complaining more loudly now because The Wiz was a lot more colorful than the previous two. Just saying. I do think they need to have limited commercial interruptions and find a pair of sponsors to make this these theatrical productions feel more theatrical. And considering the ratings were pretty dang admirable (11.4 million watched live, and a 3.4 in the 18-49 demo with the NFL [for the record, the Packers comeback started just as The Wiz ended at 10:45 PM EST] getting 12.9 million and a 3.5 in the 18-49 demo), you can bet NBC isn’t going to stop doing them now.

In my area and most markets, local news began a quarter-hour early.