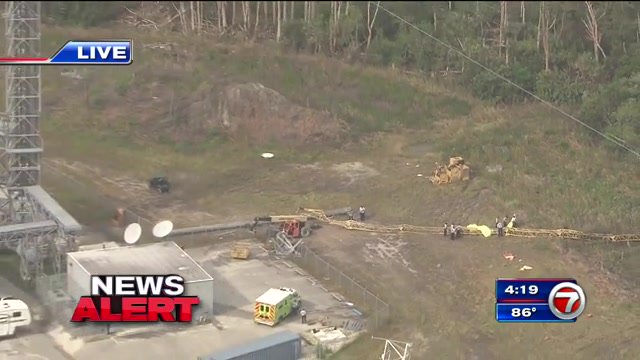 Broadcasters have long been concerned that all stations may not be able to make the mandated switch to new channels following the spectrum auction on the FCC’s schedule, largely because broadcasters don’t believe there are enough qualified tower crews to get the work done — a concern shared by some tower companies. That fear was exacerbated by the deaths of three tower workers in Miami last month.

The tragic deaths of three workers on the tower of WSVN Miami late last month underscore why the FCC should cut broadcasters slack — not crack its whip harder — as they strive to meet agency deadlines to move to new channels in the incentive auction’s wake, broadcasters say.

“Working on towers is extremely dangerous, and whenever you create artificial deadlines, you increase the danger, especially if you have to work through the winter or in bad weather,” said David Donovan, president and executive director of the New York State Broadcasters Association.

“It certainly is an example of just how dangerous this work can be,” added Darren Alline, chief engineer of Miami’s WPLG, which co-owns the Miami tower with WSVN. “People need to dot their i’s and cross their t’s because there’s very little room for error.”

The three who died in the Sept. 27 incident were employees of Tower King II, Cedar Hill, Texas. They have been identified as Benito Rodriguez, 35; Peter Marcus Goffena, 31; and Brachton Barber, 23. The latter was the son of Tower King II principal Kevin Barber.

The three Tower King II workers were attempting to move some heavy objects at the top of the 950-foot tower when they fell to their deaths. WSVN hired Tower King II to help it move from ch. 7 to ch. 9, its new assignment under the FCC’s incentive auction channel-repacking plan.

WPLG’s Alline said the three were apparently tethered to a “gin pole,” a steel device that attaches to the tower and turns it into a crane. In this case, the workers were moving a dummy pole on a candelabra when the gin pole somehow separated from the tower, Alline said. “It’s way too early in the process to know what happened,” Alline added.

“It was a freak, tragic accident, kind of like when a plane goes down,” said Tower King II principal Barber.

“We are saddened by this tragic event,” said Ed Ansin, WSVN owner and president, in a statement. “Our deepest sympathies go out to the families of the three men who died.”

WSVN representatives declined further comment on the incident and on what their next steps will be, whether they believe they can still meet their April 12, 2019, FCC repack deadline, or what the tragedy says about the FCC’s entire station transition scheme.

None of the three stations that have antennas on the tower — WSVN, WPLG and WLYF-FM — were knocked off the air due to the accident, Alline said.

Representatives of Stainless, the tower’s manufacturer, were finally able to inspect the tower on Oct. 6, and their preliminary finding was that the tower is sound, Alline said.

The incident is currently being investigated by the federal Occupational Safety and Health Administration. Michael D’Aquino, an OSHA spokesman, said the agency has six months to conclude its investigations and doesn’t issue “preliminary reports” on its findings.

Under the FCC’s repacking plan, 987 commercial and noncommercial TV stations are supposed to switch to new channels within a 39-month period that started April 13 this year. In most cases, the moves involve the replacement of transmitters and other RF gear, including heavy antennas on the towers.

Stations that don’t complete their transitions within the time periods provided lose their rights to continue broadcasting on their old channels.

To ease the transition process, the FCC has provided for broadcasters to make their channel changes in 10 phases.

Even so, broadcasters have long been concerned that all stations may not be able to make the switch on the FCC’s schedule, largely because broadcasters don’t believe there are enough qualified tower crews to get the work done — a concern shared by some tower companies.

In a Sept. 19 meeting at the FCC, American Tower Corp. representatives told agency officials that there are only 12 crews qualified to work on complex broadcast towers and another six crews qualified to perform less demanding services.

“ATC projects a high probability that by the end of Phase 2 (April 12, 2019), lack of qualified tower crew availability will start delaying projects and will have a compounding impact on the following phases,” ATC said in a lobbying disclosure document filed at the FCC.

In response, FCC spokesman Charles Meisch said the agency has announced that broadcasters who fail to meet their transition deadlines may be able to continue broadcasting temporarily by using lower power, broadcasting over other channels in their markets, or other similar means.

“The post-auction transition scheduling plan and other guidance contemplate a case-by-case approach for evaluating changes to the transition deadlines to give broadcasters the flexibility to address unforeseen circumstances and promote a safe, smooth transition,” Meisch said.

Still pending at the FCC is a 2014 petition from the Big Four TV network affiliate associations seeking reconsideration of the 39-month deadline.

“If nothing else, the FCC must reconsider its decision to impose a hard, inflexible and unforgiving cap on the amount of time a station has to transition to its new channel,” the petition says.

The NAB fully supports an FCC review of the 39-month deadline, according to NAB spokesman Dennis Wharton. “We’ve made it clear on many occasions, both at the FCC and in Congress, that the arbitrary 39-month deadline needs to be revisited,” he said.

NAB also is promoting legislation on Capitol Hill that would bar the FCC from knocking off the air stations that aren’t able to meet their transition deadlines through no fault of their own, Wharton said.

The legislation, which is pending in the Senate and the House, also seeks to ensure that broadcaster are fully compensated for their transition costs.

“We’re not commenting [on the deaths of the tower workers at WSVN] because we don’t want to appear to be exploiting a tragedy for political purposes,” Wharton said.

I think there are more than twelve, though not many more. This can get ugly.

The FCC under Tom Wheeler set an arbitrary time period without any regard for crew safety or feasibility. This needs to change ASAP.

The transition deadlines are ridiculous. They promote needless error that could cost more lives. The cellphone industry can wait. It waited 50 years… five more won’t make any difference, but it might save lives.

This whole repack was done without any consideration for reality by those in the beltway who have no clue how the broadcasters operate in the real world.

don’t know a lot about transmitter towers so forgive my overly simplistic question. Why does anything have to change on top of a 100-200 story tower if the transmitter is on the ground ?

The antenna is tuned to what channel the station is set to broadcast on. This cannot be changed and to switch frequencies you need a new antenna.