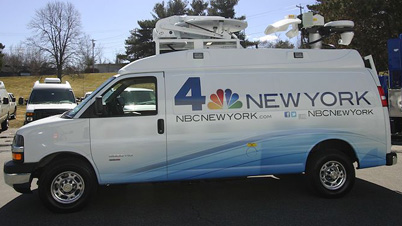 While all industry eyes this week were on the FCC as the deadline came and went for TV broadcasters to tell the agency if they wish to participate in the incentive auction, three other spectrum-use changes are afoot that will affect many ways TV newsrooms use spectrum to create and contribute content for their newscasts.

First up is satellite news gathering. By June 1, the FCC is requiring all SNG video transmissions to use the DVB-CID (carrier ID) standard  — a user identifier inserted into the carrier.

“The carrier ID is the MAC address of the device,” says Fred Morris, VP of product marketing at Comtech EF Data, one of the companies supplying carrier-ID-compliant SNG modulators.

A MAC address, or media access control address, is a unique identifier assigned to equipment with any type of IP network connectivity. By inserting that unique address into the satellite carrier, it is simpler for satellite operators to identify field transmissions that are “lighting up” the wrong transponder and causing interference, he says.

With that information, they can contact the SNG crew in the field responsible for the errant transmission and request they shut it down immediately, Morris says.

The carrier ID allows for several fields of information to be inserted, including name, address and cell phone number, but the rule requires only the MAC address to be present, he adds.

To comply, SNG trucks will need modulators that can support the carrier ID. Some modulators now in use can be upgraded to support the new function, but older models without sufficient processing power will need to be replaced. The cost of a new SNG modulator ranges from $1,500 to $15,000, he adds.

Another major shakeup coming to newsgathering frequency use flows out of the TV spectrum repack and its effect on the spectrum assigned to wireless mics, says Roger Charlesworth, executive director of the DTV Audio Group.

ENG crews that rely on wireless mic devices, including the mics themselves, IFB, intercom and in-ear monitors, currently have two 6 MHz UHF TV channels reserved for their use in each market, but post-repack those homes will go away, he says.

When the dust settles, there will be 4 MHz dedicated to wireless mic use in the duplex gap –a swath of spectrum that separates cellular up and downlink service. There may also be a “naturally occurring” white space (unused TV channel) in many TV markets that could be available for wireless mics, but on a non-exclusive basis, says Charlesworth.

Aside from being two-thirds less spectrum, the 4 MHz in the duplex gap suffers from other limitations, he says. Not only will it be “kind of noisy,” but wireless mic operators will be limited to using power no greater than 25 mW, he says.

“The overall impact on newsgathering is it’s going to be very difficult to just show up and find a channel to operate on,” he says. “On a local level, news operations will need to coordinate more closely with the local SBE [Society of Broadcast Engineer] chapter and look for spectrum that might be available.”

The exact time when ENG crews must vacate the channels they currently use is unclear. The existing FCC timetable for the repack calls for the initial clearing target and band plan to be announced in third to fourth week of April.

While existing FCC rules for the repack give broadcasters a maximum of 39 months to complete their move to a new channel assignment, wireless mics have no such luxury, Charlesworth says.

“We think the wireless carriers will want to deploy quickly,” he says. “Wireless mics are not protected, so if they are in the auctioned spectrum or where some station is moving to, that [the UHF channels currently used by wireless mics] will become unavailable.”

Regardless of the exact day they must vacate, broadcasters should begin planning their capital budgets with the new wireless mic equipment in mind, he says.

Station managers should also budget for more engineering help, Charlesworth advises. “In a time when engineering departments have been downsized, stations will have to reverse gear and get the engineering resources in-house or hired out that will figure out what kind of equipment will be needed and where it can operate,” he says.

In the third quarter of 2016, a Memorandum of Understanding is expected to be signed by NAB, SBE and the Department of Defense that will usher in another significant change in the use of the spectrum for newsgathering.

The memo will lay out the procedures under which the department can begin to share the swath of spectrum assigned for 2 GHz Broadcast Auxiliary Service (BAS) use, says Ted Hand, director of engineering/operations at Cox Media Group in Charlotte, N.C., and SBE national frequency coordination committee chairman.

The existing seven 12 MHz-wide BAS channels between 2025 MHz and 2110 MHz are the backbone of ENG contribution. Sharing them with Defense will elevate the importance of frequency coordination to new heights, says Hand, speaking for SBE.

“As the availability of spectrum has diminished, that’s created the need for spectrum users to start sharing pieces of spectrum,” he says. “One of those is the Department of Defense, which uses spectrum for different battlefield situations for data and for unmanned aerial devices.”

Initially, the department plans to use the 2 GHz BAS band for training exercises around the United States that require video from simulated battlefields to be transmitted via terrestrial, point-to-point microwave links it calls tactical radio relays (TRRs), he says.

Eventually, the department could begin to use the spectrum for video transmission from aerial drones, but that is far less likely because of the possibility of generating interfering signals. A drone flying at an altitude of a mile or more could blanket an area 100 miles wide or wider, Hand says.

“TRR is the first phase. If they can figure out the interference and make it work, they will move on to the next thing, which probably will be airborne drones,” he says. “But they aren’t going to jump steps. They have to make it work on the ground first.”

Currently, SBE is working with department frequency coordinators to determine exactly how Defense and broadcasters will interact to minimize interference. Although SBE hasn’t settled on its final form, a “stop buzzer” will be an important component of whatever approach ultimately is taken, he says.

“That means if a TV station is receiving interference [from defense use], it can go to [an online] site and report that it is being interfered with. Because the Department of Defense knows where your station is and where they are operating, they can immediately stop what they are doing,” he says.

Defense has been quite cooperative, he says, adding “this is not the type of thing where they are coming in and being a big bully.”

“They want everybody to be happy with it,” says Hand. “At the end of the day, those frequencies are still Part 74 BAS frequencies that have been the broadcasters’ for years. Broadcasters are still the primary user, and the DoD is secondary.”