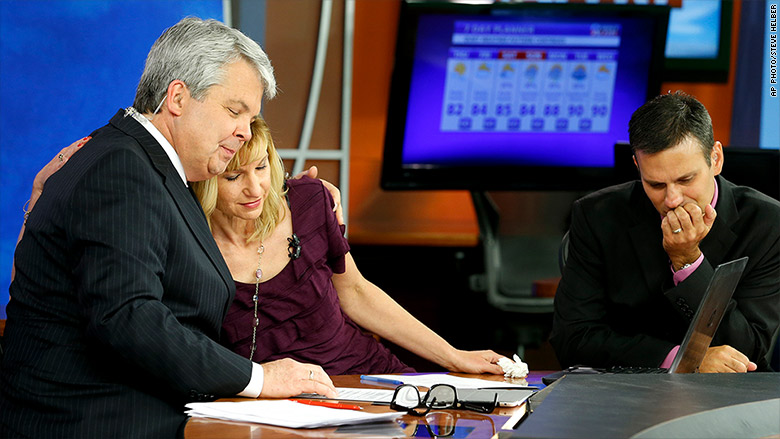 A growing list of mass killings, including the on-air murder of two young TV journalists, was among the more prominent stories occupying airtime at both local and network news organizations this year. Also leading newscasts and special broadcasts in the past 12 months was the increasingly contentious political campaigns that will culminate in the 2016 elections. And broadcasters themselves made news as they looked to broaden their distribution platforms by forming a variety of mobile ventures. This is the first part of TVNewsCheck’s annual look back at the year. Tomorrow in Part 2 we'll reprise the major developments in business, regulation, programming and new media. Part 3, the year’s big stories in technology, will be featured on Wednesday, while Part 4 on Thursday will highlight some of the media luminaries who died during 2015.

In a year of gun violence, sparring with candidates and newsroom drama, the TV news industry — local, network and cable — made headlines in 2015, sometimes with tragic consequences.

That trend came to a jarring head in August, when two TV journalists from WDBJ, the CBS affiliate in Roanoke, Va., were shot to death on live television during an otherwise innocuous story.

The murders of Alison Parker and cameraman Adam Ward forced a small newsroom to cover its own tragedy. It also raised questions about the security of news crews in the field.

The Virginia shootings were by far the most personal of gun-related stories, but the sheer number of mass shootings made covering them part of the regular drill for TV reporters.

Journalism ethics made news in 2015. In Chicago, for instance, newsrooms made varying decisions about police dash-cam police video of an officer shooting 17-year-old Laquan McDonald.

Local TV went to great lengths to cover more Pope Francis’ September visit to the United States. Some stations paid up to $25,000 to get a good spot at key events. In Philadelphia, NBC O&O WCAU photographers walked off the job two days before the pope’s arrival.

Also in 2015, broadcasters started distributing content in new ways. TV station groups partnered with Watchup, which lets mobile users create their own newscasts and launched NewsON, the mobile app with news content from more than 100 TV stations around the country.

The Big Four networks were also in the headlines in 2015, in a large part thanks to Donald Trump. The Republican presidential candidate made news by waging a war with Fox News and forcing Univision’s Jorge Ramos out of a press conference. Meantime, critics called on broadcasters to be tougher on Trump.

The year also saw NBC’s Brian Williams’ fall from grace, rehabilitation and reemergence (on cable, however, not the broadcast network). After the former NBC anchor served the six-month suspension handed down in February, he was given a job at a newly revamped MSNBC.  Earlier this month, Williams appeared on NBC for a special report on the Los Angeles schools closure. His replacement, Lester Holt, was out sick.

Read all of the 2015 Year in Review stories here.