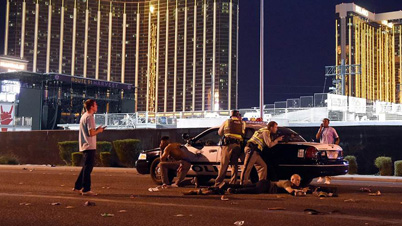 Among the lessons learned in the wake of covering a tragedy is the value of counselors for staff and the importance of  having close working ties with law enforcement when such a catastrophe with numerous moving parts unfolds.

LAS VEGAS — If there’s one thing that’s clear nearly six months after the Mandalay Bay shooting here, it’s that the trauma of the event is still very real for local media.

“There are a lot of people on our staff who are still healing,” said Patrick Walker, a reporter at KLAS who spent nearly 12 hours on the air following the shooting and has devoted much reporting to it since.

Walker told attendees of the NAB Show on Tuesday that those reporters who worked closely with the grieving families of shooting victims have felt particularly hard aftershocks.

Todd Brown, news director and GM of KVVU, brought in counselors after the first week for this staff, and was warned at the time that there would likely be a recurrence of traumatic feelings in a few months. “Someone told me it was going to sink in 90 days later, and it did,” he said.

Hub Brown, a journalism professor at Syracuse University, said he has begun impressing on students the need to seek help after they cover such events.

“We talk about the need for self care with our students,” he said. “You’ve got to be able to go and talk with somebody.”

In a conversation that unpacked some of the major threads of media and law enforcement’s response to the shooting, it also emerged that developing close working ties between the two entities is key when such a catastrophe with numerous moving parts unfolds.

On the media side, having a good working relationship with local law enforcement “is like having a bank account” local journalists must continue to maintain “so that when a rainy day comes you have that understanding,” Professor Brown said.

Charles Hank, a Clark County assistant sheriff who was among law enforcement on the scene, agreed. “We want to do this with respect as professionals,” he said of the briefings and updates that followed the shooting, where amateur reporters were more likely to butt heads with police.

Another strand that emerged is that local media can play a fast-evolving role that often shifts in unexpected directions. That was the case for Carla Rae, a comedian and morning radio host for KKLZ whose show shifted from music to talk in the days following the shooting.

“We all became reporters that day for the rest of the week,” she said.

Emotions also ran high at the station, whose sister country station had given listeners a number of free passes to the country music festival targeted by the shooter.

Walker admitted that in his long on-air stint immediately after the shooting, he, too may have “editorialized” on air when exhaustion and emotion set in.

Syracuse’s Brown says such lapses and mistakes are invariably a part of crisis reporting.

“You’re going to make mistakes,” he said. “What matters is what you do after the mistake.”