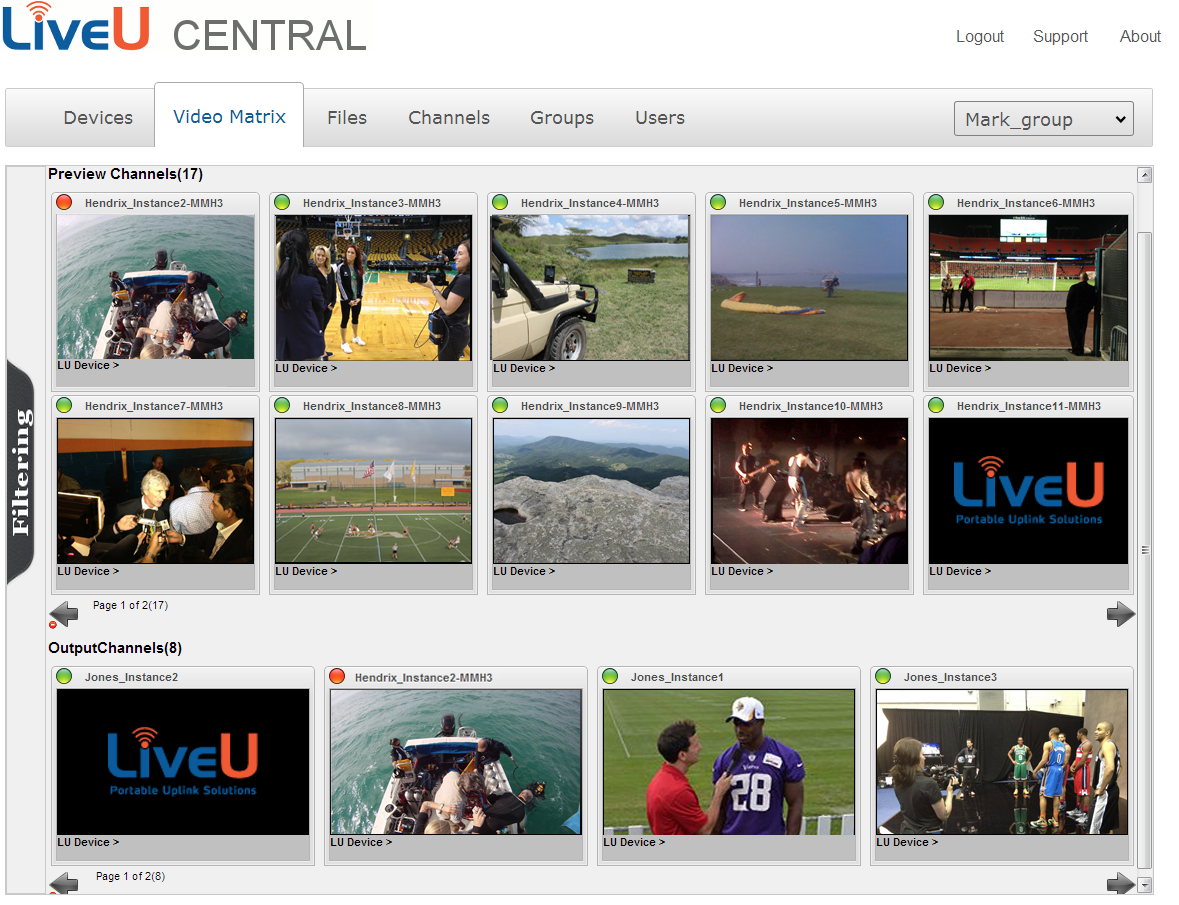 It wasn’t too long ago when TV stations may have had only one bonded cellular system. The technology was new and engineers questioned the reliability of live shots over a cell network.

But it proved itself and today it’s not uncommon for stations to have several units in addition to reporters with apps from the bonded cellular vendors that they can use to transmit video from their smartphones.

So, now the problem is how to manage all of those incoming feeds, and use them collaboratively across an entire group.

“Broadcasters have gotten over that bonded cellular hump,” says Ronen Artman, VP marketing at LiveU. “Now they want to take control of their devices.”

In comes the IP-based multiviewer, a cloud-based Web application that includes a host of features, the most important of which is the ability to display the live cellular feeds across a station or station group on a single screen and switch to that feed at the click of a mouse or touch on a tablet.

“Even if you own two or three of these bonded cellular devices, you’re absolutely going to want some kind of solution to be able to manage them,” says Kurt Hanson, chief engineer of WABC New York.

In April, Gray Television worked with TVU Networks to launch its IP-based routing, switching and distribution solution called TVU Grid. LIN Media jumped onboard with the solution about a month later. Both groups are still rolling out the solution.

LiveU unveiled its answer to TVUGrid called LiveU Central last week at the IBC Show in Amsterdam. And while not publicly announced yet, executives from Dejero Labs say they have a similar solution in the works that they hope to launch by year’s end. Both companies say they’re in talks with U.S. broadcast groups, but have no deals in place.

“It’s too good of an idea for someone not to do something similar,” says Jim Ocon, VP technology at Gray, who worked with TVU to develop Grid.

“When social media started to erupt, it brought people together and let them collaborate on ideas,” Frusina says. “Today, you have this huge content boom out there that, unfortunately, is segmented. Putting all of that content together into something like a multiviewer that lets you manage your devices and collaborate your content is going to give broadcasters much better results.”

Dejero’s solution is so new that it doesn’t have a name yet and is still being tweaked back in the lab. Frusina says the company has told only a few broadcasters in the U.S. about it. But he promises a number of features, including sub-one second latency of the live feeds in the control panel, which the company achieves using patent-pending technology.

That would be an improvement upon LiveU’s solution, which is about four seconds, according to Artman. TVU’s solution refreshes a thumbnail image — not an actual live video — about every four seconds.

Frusina also says Dejero’s solution will allow for unlimited feeds. Currently, LiveU’s solution is limited to 16 feeds at once, but Artman says its first update will also allow for an unlimited amount. The same goes for TVU.

At IBC, LiveU was showing off its solution’s geo-location service that uses a map to show where all devices, including smartphones with the company’s app on them, are located.

When news breaks, an operator at the station can pull up the map and see which reporters or photographers are closest and send them to the scene.

Since its April launch, TVU has already updated Grid. At IBC last week, the company was demoing the updated solution, which adds some remote control and multiformat features.

“We were first in this space, so we want to continue to stay out in front with the latest advances,” says TVU CEO Paul Shen.

The update allows engineers back at a studio to monitor and control bonded cellular transmitters in the field to ensure the photographer can focus on the shot and not the logistics of a cellular connection.

Version 2.0 can also deliver a return video feed back to a TVUPack in the field, which has a small monitor on the front of it. This allows crews in the field to watch the main feed on location, which could come in handy in tight breaking news situations.

TVU Grid can now also stream to multiple formats and directly push those streams to a content delivery network or straight to the Web.

Artman says one of the next steps for LiveU is to develop an SDK for smartphone app developers so they can create apps that would let viewers shoot live video on their devices and give stations the opportunity to monitor it on their multiviewers and put it on the air if they want to.

“It’s a way of crowdsourcing the news, and it wouldn’t be very difficult to implement,” he says.

While currently being marketed as a solution to manage transmitter devices in the field and bring station group content together in an IP ecosystem, there’s talk of using these features for distributing network and syndicated programming, instead of pulling that content from a satellite.

Ocon says he doesn’t see it as a replacement for distribution systems like CBS’s Pitch Blue, but instead, calls it another option.

“It helps you to be more or less on one platform,” he says. “I think it shows a lot of promise for cutting out tasks that have multiple stations ingesting once and distributing to many.”

Dejero’s Frusina says the solutions are perfectly designed for network news services like CNN Newsource, which uses fiber and satellite to distribute news content to its affiliates.

“I firmly believe there’s a market there for that kind of opportunity,” he says. “This bridges broadcasters into the IP world.”