Back to TVNewsCheck Home Print this page
DMA 144: SALISBURY, MD 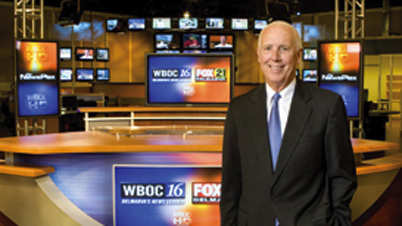 The owner of the CBS and Fox affiliate in Salisbury, Md., was struck by a pickup truck Thursday morning while out for his daily bicycle ride. He underwent surgery Thursday afternoon but did not survive the night.

Thomas H. Draper, who built WBOC in Salisbury, Md. (DMA 144), into an influential independently owned station with a strong local news presence, died Sept. 7 from injuries sustained in a bicycle accident near his home in Delaware. He was 76.

Draper was struck by a pickup truck Thursday morning while out for his daily bicycle ride. According to Delaware State Police, after calling 911, the driver stayed with Draper until help arrived. No charges have been filed in the accident.

Draper was initially taken to Bayhealth Milford Memorial Hospital and then airlifted to the University of Maryland Shock Trauma Center in Baltimore where he underwent surgery Thursday afternoon but did not survive the night.

“There are no words to express the profound grief the WBOC family feels at this time,” says Craig Jahelka, president of Draper Media. “Tom was a broadcast pioneer, who said often those of us at WBOC have a moral obligation to serve the people of Delmarva.  Our thoughts and prayers are now are with his family.”

Thomas Henry Draper was born and raised in Milford, Del. in 1941. His schooling took him to boarding school in Massachusetts and ultimately to Brown University in Providence, R.I. There, he excelled on the lacrosse field. He was the captain of the 1964 team and named All-American that year as well. He eventually would end up in Brown University’s Athletic Hall of Fame.

After graduating from college in 1967, Mr. Draper moved back home to Sussex County, Del., and in 1967 bought a radio station that became WTHD (his initials). Five years later Draper signed on WAFL-FM in Milford, Del.

Draper’s broadcasting career would take a big turn in the late 1970s when WBOC-TV’s then-owner, the A.S. Abel Co. — which also owned the Sun papers in Baltimore — put the station up for sale. But Draper was outbid twice.

Draper and his group of investors were asked to make a third bid for WBOC and its two radio stations. After the deal was done, Draper sold the two radio stations to focus on TV. Draper would go on to buy and sell other TV stations in Kansas and Texas. But WBOC always remained his first love.

“Tom wanted to serve the people of Delmarva with high quality news and information,” says Jahelka. “He and his family continually poured money back into the station. And that passion was rewarded as WBOC-TV grew to become one of the most dominant local stations in the nation.  He was one of the few remaining single, independent owners nationwide who truly cared about his viewers and community and invested in WBOC. It’s why WBOC is the smallest market station in the country to fly a news gathering helicopter, operate three bureaus, produce both local news and a daily local talk show as well as a local outdoors show, and broadcast from a multi-million-dollar NewsPlex.”

Draper expanded his CBS affiliate to include Fox and Antenna TV on subchannels. He launched a separate digital division, and in 2015 got back to his roots with the purchase of a 50,000 watt radio station, WBOC-FM.  Draper was poised to announce the launch of Delmarva’s newest television station, Telemundo Delmarva.

“But there was more to Tom than just broadcasting. He loved his family and friends. He loved bike riding, hunting, farming and politics,” Jahelka says.  Draper worked in the Milton, Del., office but was often seen visiting the main station in Salisbury.

“I have been so honored to work for Tom. He was not only our leader, but he was also our friend” says Laura Baker, Chief Operating Officer of Draper Holdings, parent company of WBOC-TV. “Many people know him as the owner of WBOC, but he was also passionate about farming and land preservation. He was unique in that way—owning farms and broadcast stations.”

Baker says his legacy will live on through his children, who with others, form the Board of Directors for Draper Holdings.

“Tom was adamant that WBOC live on past him,” says Baker. “Although we are a private company, he did have a board of directors and made sure all four of his kids knew about the business. All of them have worked at WBOC over the years, and they share his dedication.”

Baker says daughters Molly Draper Russell and Mariah Calgione both worked in news; Bill Draper worked in creative services and Hank Draper worked in sales.   Molly Russell is now co-president of Draper Holdings, and chairman of the board, and Hank is a VP of Loblolly L.L.C, the farming and land division of the company.

“I am confident they will honor their father and his vision for WBOC and for Delmarva,” Baker says.

Tom was one of our best in the business. A true class act and gentlemen.

A great man and great broadcaster!

I had the greatest opportunity in my career to work for Tom and Bill Kenton – now both are gone. A part of me is gone. None were / are better than Tom. No words can ever come close to expressing the lose. Tom will be missed and never forgotten. RIP – Prayers and blessings to Tom’s family.

I have never read the story of this man previously. If there are more people who enjoyed working for his tv station I’d like to see them comment, because he sounds too good to be true. I hope he would get a chuckle out of my comment if he could see it. I also hope he was TRUE class act. Regardless, it is nice to go and have at least someone think you were terrific. Lacrosse player? Great place to start.

Why are you being such a jackass?

I seriously would like to see more people (some of who would have to be regular folks who had regular jobs at the station) give their opinion of this man. His bio sounds sounds like he deserves that. Step up, people.

So sorry to here about Tom’s death. Tom was the personification of a “local” broadcaster. I had the pleasure of serving on the CBS Affiliate Advisory Board with Tom for a number of years and he was always outspoken about our affiliate expectations (in relation to the network) and community obligations. Barb and I will keep the Draper family in our prayers.