Back to TVNewsCheck Home Print this page
TVN TECH | WEATHERCASTING 2017 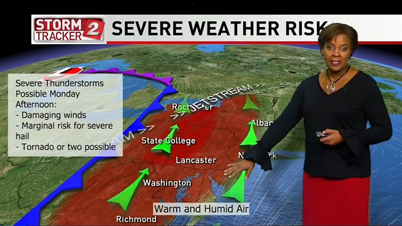 Station meteorologists are awash in the data they rely upon to make weather predictions and warn of severe conditions, and the forecast sees no end in sight for the torrent as an explosion in data sources threatens to overwhelm station resources and meteorologists alike.

“From the expansion of dual-pol [polarization radar] data going back a few years to the latest release of GOES-16 [Geostationary Operational Environmental Satellite-16] satellite data, the amount of data available to meteorologists continues to explode,” says Mike Mougey, VP of broadcast sales at Baron Services.

The GOES-16 satellite is producing “the largest data set of recent note,” says Jim Brihan, leader for the media offerings for media systems at The Weather Co. (formerly WSI).

Previous weather satellites provided imaging every 15 minutes, but GOES-16 can deliver new imagery “every five minutes or even every minute,” he says.

The frequency of new images from GOES-16 is only part of the story, says Karl Eggestad, sales director for weather solutions at ChyronHego.

Where once only visible, infrared and water vapor images were available from older satellites, GOES-16 delivers “dozens of different data products,” such as lightning probability, storm totals and other data parameters like pollutant and aerosol measurements used to model weather conditions, he says.

Compounding the amount of satellite-delivered data is the higher resolution of these satellite images — three to four times greater than previous generations, Eggestad says.

Other factors, too, are driving the deluge of data. For instance, cloud-based computing has made it affordable for researchers and those in academia to process their own weather models using the GOES-16 data and in that way, make their new models available to meteorologists, says Eggestad.

A typical station meteorologist may wish to use about 200 MB of GOES-16 data every five minutes, Brihan says. “If you do the math, that’s about 30% of a 20 Mb/s pipe. The point is you are consuming a huge percentage of that 20 Mb/s pipe, and that could be a problem for a station if that’s the total bandwidth it has available.”

Beyond bandwidth resources, the flood of data can create other challenges for meteorologists, most notably a needle-in-the-haystack situation.

“The challenge is twofold,” says AccuWeather director of product development Bill Boss. “First, sifting through all of this data to find what is most important, and second, turning that information into something that is easy for the viewers to understand.”

While various weather system vendors are tackling the challenges in different ways, each recognizes the problems the weather data deluge creates.

AccuWeather has set up what it calls conditionals, a weather-condition trigger, in its StormDirector Plus system to winnow through the data automatically and alert meteorologists when a condition, such as a temperature threshold, is reached, Boss says.

Closely related is having “all of that at your fingertips” when a condition triggers an on-screen alert, such as a tornado warning, he says. “Because it can be touchscreen-driven, I can get conditionals when I am on air and immediately go to the information I need.”

Baron has deployed a multifaceted approach through its Baron Lynx weather graphics and storm tracking system to make it easier for meteorologists to get at the data they need, Mougey says.

Those include Baron-exclusive data products, daily pre-produced explainer graphics focused on the significant weather story of the day and an easy-to-use interface with intuitive buttons, dropdown menus and descriptive thumbnails for each product so meteorologists can see how a particular product will look on screen, he says.

The Metacast weather graphics system, which is tied into the ChyronHego Camio Universe workflow, came into existence some 20 years ago around the notion that data is a commodity, says Eggestad.

In that sense, it was designed from the very beginning to ingest and manage multiple parameters of weather data from multiple sources, he says.

Metacast tackles today’s flood of weather data by giving meteorologists a “user-friendly way of overlaying multiple models” to analyze and select from via the on-air system rather than a separate meteorological workstation, says Eggestad.

A database manager makes it possible to hide, show or discard individual models, he adds.

The Weather Company’s approach is to rely on the cloud. “The method of pushing data was fine when the amount of data was manageable, the data was a lower resolution and the frequency of updates was relatively low,” Brihan says.

Continuing down that path in today’s data environment, however, would overwhelm a station’s bandwidth and ability to process the data, as well as fill up its disks, he says.

Pulling data from the cloud bypasses these problems. A station meteorologist using the company’s Max weather system “through the normal course of his or her day” may want certain data, such as GOES-16 data or dual-pol data from the National Weather Service, he says.

“By requesting that data in their scenes and their work every day, they essentially make a request to the cloud for that data, and they do it transparently,” Brihan says.

Vizrt is a relative newcomer to weather, but it too recognizes the challenges the flood of weather data can create.

Currently, the company is focused on weather alerts and leverages the same technology used in TV news and sports for graphics.

The company is “data-agnostic,” says James Monroe, manager of weather sales. That means it will integrate “any data type and format” — including high-resolution — into its system to meet specific station requirements.

The data needs of meteorologists will vary based on their geographic location, he says. Therefore, it too leverages the cloud to allow meteorologists to select the “segments of data” they need rather than taking in a massive flow of data, “90% of which the local meteorologist doesn’t use,” Monroe says.

Strategies for handling the flood of weather data are only likely to become all the more important going forward.

Right around the corner is the launch of GOES-S, which upon achieving geostationary orbit in mid-2018 will be designated as GOES-17.

When the satellite goes into service, today’s flood of data will morph into a tsunami of images, models and parameters that would otherwise overwhelm station weather resources and the meteorologists who use them if not for the strategies vendors are deploying today to manage the data.

Why would anyone watch these people..Thir forecasts are yesterday’s news..A good App is all you need

Except when Jose on the backhoe cuts a fiber and you can’t get to the cloud because most companies are
too cheap to pay for redundant connectivity with route diversity. Yea that cloud stuff will be just fine…