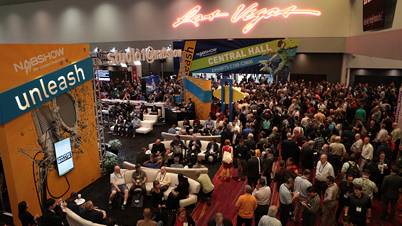 Broadcast engineers and technologists headed to the 2017 NAB Show next week in Las Vegas have a lot on their plates, some of which — like the TV spectrum repack and ATSC 3.0 —  that are to be expected, and others — like the cloud and virtualization — that are unfolding in a somewhat surprising manner just in time to help broadcasters deal with these major changes.

These developments are contributing to a heightened sense of anticipation among some in the tech community about this year’s NAB gathering, April 22-27 at the Las Vegas Convention Center.

“I am about as excited as I have ever been for an NAB this year,” says Jason Effinger, EVP and CTO of Gray Television. “So many things are coming together just at the right time.”

Among them are the cloud, IP for professional video and audio transport and new workflows in news, master control and elsewhere enabled by the convergence of these technologies, he says.

But it is the net effect of this convergence that is most important to Effinger, he says. “For Gray, this all boils down to one word: simplification.”

At this year’s show, Effinger expects to see technologies that will help the station group simplify and streamline its workflows for content prep, master control and playout.

“There are some things we do at Gray that we repeat too many times,” he says. “That takes us away from focusing on our local clients … because we are trying to manage too many boxes in too many locations.”

With “reasonably priced” bandwidth making it more affordable than ever to connect stations, enhancing centralization to increase efficiencies will be something the group will be looking for in Las Vegas.

Gray will also look for technologies at the show to advance its efforts to streamline news production, he says.

News technology will be the top NAB tech priority for NBCUniversal Owned Television Stations, as it is every year, says Jeff Morris, the group’s SVP.

The news thrust for Morris’ tech team this year will be on newsgathering, including cameras, lenses, mics and IP field contribution, and technology for the studio, including “everything from the newsroom system to control room and set technology,” he says.

Another major thrust will be IP technology. “We are in the process of making a pretty technologically progressive facility in Philadelphia to be home to our Philadelphia businesses.

“That will be our first station to ever adopt IP technology at its core,” says Morris, adding he can’t envision ever building a “facility in the future without IP at the heart of it.”

Morris and his team will remain open-minded at the NAB Show about which IP protocol to employ at the new facility, but will likely settle on a protocol in the next few months, he adds.

Robert Lydick, VP station operations at Tegna Media, is also “very interested in a path to IP” for the stations in his group, he says.

“One of my focuses is software as a service (SaaS), or infrastructure as a service,” he says. “How can we better utilize the cloud — whether it’s for local or our enterprise architecture?”

Tegna, formerly Gannett Television, has relied on the cloud for years at its graphics hub in Denver. Cloud rendering of ChyronHego’s Axis World Graphics “has been a big success for us,” Lydick says.

More recently, the group has deployed a centralized IP-based ingest center it is calling the Media Clearinghouse Project based on the Sony Ci Cloud and Crispin automation, he adds. “Whether it’s cloud or infrastructure, we are looking for tools we can implement to generate better content or be more efficient.”

Similarly, the major focus of Sinclair Broadcast Group at the NAB Show will be looking for the best ways to leverage cloud-based services, says Mark Aitken, VP of advanced technology at Sinclair.

Cloud services, which can enable virtualized functions such as traffic, automation, scheduling and resource management, will play a fundamental role in helping Sinclair achieve its goal of rolling out an ATSC 3.0-based national network of single frequency networks (SFNs) to advance its strategy of mobile first, Aitken says.

“What you find is there are software implementations of what used to be hardware,” he says.

Another technology on Aitken’s NAB Show list will be encoders that support scalable high efficiency video coding (SHEVC), which also will promote the broadcast group’s priority on mobile.

While there will be a major push to make its ATSC 3.0 national SFN network a reality, many years of ATSC 1.0 TV service remain, he says. “It’s really the bridge to our future that has to be well-maintained.”

As such, Sinclair — like all other broadcasters — is motivated to make the 39-month TV spectrum repack a success, he says.

The repack is top of mind at the moment, says Brett Jenkins, SVP and CTO at Nexstar Media Group. “All of a sudden, it [the repack] is very real, and we have a lot of work to do in a short period of time.”

Jenkins has scheduled meetings at the NAB Show with transmitter manufacturers, antenna makers, tower companies and consulting engineers, he says.

“I am also looking at some other related transmission-type projects upstream of the transmitter, which could be STL [studio-to-transmitter link] gear and transmission encoders,” Jenkins says.

Like Aitken, Jenkins is also “very interested from an ATSC 3.0 perspective” to discuss SHEVC and HEVC with encoder manufacturers at the show, he says.

“We want to make sure that encoder manufacturers over the next couple of years are investing in those technologies so that when we are ready to start turning on some 3.0 transmission facilities, we will have the encoding on the backend ready to go,” he says.

Beyond over-the-air broadcasting, Jenkins will also go to the NAB Show looking for software and technology vendors that can help Nexstar achieve its vision for video streaming — both over the top and via its websites and apps, he says.

While each broadcaster attending the NAB Show next week will have his or her own individual priorities, at least when it comes to technology, there appears to be a convergence of technologies like the cloud, IP, Software as a Service and others that will help broadcasters reshape their businesses as the new opportunities ATSC 3.0 present become realities.

What they are looking for on the direction of their corporate suits is how to increase or maintain profit..another words how to eliminate positions with technology!!!