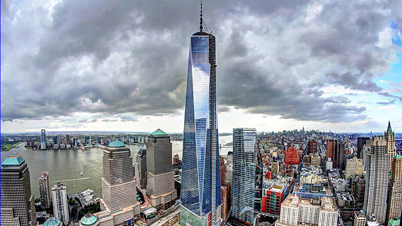 Next week, WNJU is expected to begin over-the-air nighttime transmission testing from One World Trade Center in downtown Manhattan. The station’s fulltime regular broadcasts from the site are expected to commence seven to 10 days later. By the end of 2017, five stations will be on air from the new location.

The skies were blue and the temperature in the 70s in New York City yesterday, and to a typical Manhattanite it would be hard to imagine a more beautiful spring day.

High above the city at One World Trade Center, however, the conditions weren’t so idyllic.

“We’ve had a few windy days, and we’re having one right now,” Lyons said during a telephone interview May 17.

Despite yesterday’s uncooperative winds and other weather delays, WNJU will go on-air from 1 WTC next week when it begins latenight transmission testing, Lyons said.

Already, the station’s transmitter is in place, and testing into a dummy load has begun.

OTA tests will likely take seven to 10 days before WNJU goes on air fulltime from 1 WTC, he said.

Over the coming months, the station will be joined by WNBC, WCBS, WPXN and WNET on the building, Lyons said.

WCBS is up next, although it has not yet installed its transmitter in the broadcast room located on the 90th floor of the building, he said.

Each station currently committed to the site is expected to be on-air from the new location by year’s end.

In all, the 1 WTC site has capacity for 10 UHF channels and four VHF channels, enough to handle all the TV broadcasters in the market, he said. There is also room on the spire for all of the city’s FM stations.

The most recent TV broadcaster to sign on with The Durst Organization, which owns the building in partnership with the Port Authority of New York and New Jersey and is responsible for broadcast operations there, is Ion Media. Last week, Ion announced it will begin transmitting Ion Television, Ion Life and Qubo from 1 WTC in the fourth quarter.

Durst began spearheading the effort to bring over-the-air broadcasting back to downtown Manhattan in 2010 following the failed effort of the Metropolitan Television Alliance (MTVA) to reach an agreement with the Port Authority of New York and New Jersey two years prior, Lyons said.

While MTVA still exists, it no longer is attempting to do a deal on behalf of its member broadcasters, he said.

In fact, all of the deals cut to date to move to 1 WTC were done with individual station owners, he added.

If the weather cooperates, the 2010 Durst effort will come to fruition sometime in June with completion of the RF infrastructure at the site, he said.

Currently, crews are assembling “96,” Lyons’ name for the second UHF master antenna assembly, which will be located between 1,626 and 1,666 feet above ground level.

Ninety-six refers to the 16 antenna assembly segments of six individual antenna panels apiece, which are being completed on the 1,368-foot roof of the building. When done, they will be hoisted into place on the spire.

At the 2017 NAB Show last month in Las Vegas, Lyons, who was honored at the convention with the NAB Television Engineering Achievement Award, Phil Cindrich, president of Myat, which provided the transmission line and serves as system integrator for the project, and Nick Wymant, CTO of the Radio Frequency Systems broadcast division, which is supplying the UHF and VHF panel antennas and antenna combiner systems, held a joint press conference on the project.

A common theme emerged about the RF installation as Lyons, Cindrich and Wymant each offered their insight on the project. A major design goal for the site was flexibility.

The site needed to meet today’s requirements for ATSC 1.0 on existing channels, 1.0 on repack channel assignments and, ultimately, the requirements of ATSC 3.0 operation.

Both Myat and RFS took steps from the very beginning to address the uncertainty introduced by the impending new channel assignments and different operating requirements for 3.0.

For example, the UHF transmission line was wideband, supporting operation on chs. 14-44, which was selected long before it was certain how many UHF channels would be cleared, said Myat’s Cindrich.

Beyond the repack, the line was sized to handle the increased peak-to-average power ratios of 3.0, he said.

Similarly, the RFS antenna systems were designed to handle whatever the repack and 3.0 would bring, said the company’s Wymant.

For instance, the antenna systems give each broadcaster at 1 WTC independent control over antenna polarization, he said.

One may wish full circular polarization, and another some lesser degree of a vertical component. Each may choose to its liking at any point in the future, he explained.

Like the transmission line, the antenna systems were also designed to handle the higher peak-to-average power ratio of 3.0, Wymant added.

The ease with which broadcasters can transition from 1.0 to 3.0, when authorized by the FCC, is a selling point for the site. Another is the data from the 2015 MTVA tests, which proved to be “spectacular,” in the words of Lyons.

Lyons is hopeful these benefits will help to convince the remaining TV stations in town to relocate to 1 WTC as Durst continues to talk with them about the possibility, he said.

I hope all goes well there. In 1980 I got to push “Beam On” for the first broadcast from the old WTC site after a marathon negotiating session that chief engineer George Kraus was at overnight with the Port Authority, owner of the building. It was an exciting moment after a year long construction process led by Harris.