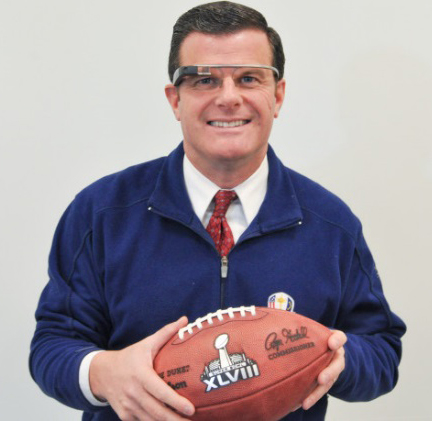 WROC sports anchor John Kucko not only covers the big games for his Rochester, N.Y. CBS affiliate, he’s the go-to guy for many of parent Nexstar Broadcasting Group’s other stations across the country. For the Super Bowl this year he gave the 26 other stations something extra and cutting edge: views of the event through the new Google Glass technology.

John Kucko, the sports anchor for WROC, the Nexstar-owned CBS affiliate in Rochester, N.Y. (DMA 78), has been to his fair share of Super Bowl games. This year’s game was the 16th he’s covered; his first was Super Bowl XXVI in 1992.

But this year, Kucko, and thousands of television viewers in many Nexstar TV markets, got a view of the festivities like no one else thanks to Google Glass.

He wore the Google Glass to augment coverage of the sights and sound of the activities leading up to the game.

“Google Glass is unbelievable,” Kucko says. “It’s so small, yet shoots broadcast-quality video. These can do what the big satellite trucks do now.” He says wearing them provides viewers with his perspective of whatever he sees.

“It shoots everything in 1080 HD and has built in audio,” Kucko explains. “I merely tap the glasses to record, play and upload. I tap it again to share and post the video to social media.”

“We were at lunch on another station matter,” says Wendy Emerson, digital marketing manager for Rochester Optical, a WROC advertiser, “and our CEO brought a Google Glass with him. John loved it and asked about using them for his Super Bowl coverage.” Within a couple days, he had permission

“John always wants to use the newest technology,” says Jerry Walsh, director of local content development at Nexstar, “and it’s very interesting, showcasing its capabilities to users and viewers alike.”

“I didn’t use it a lot, but I shot something with it every day,” Kucko says.

Kucko was on location at this year’s Super Bowl providing live reports for any Nexstar station that wanted them.

“John goes out there a week early,” says Louis Gattozzi, WROC’s general manager, “and provides the color surrounding the game.”

“Of the 38 news-producing stations within Nexstar,” Walsh says, “27 signed up to do live shots, which led to more than 200 live shots during the Super Bowl festivities.”

“It gets a little crazy,” Kucko admits.

Walsh says the key to doing so many live shots involving so many TV stations seamlessly and on time is planning and execution.

Months ago, according to Walsh, the participating Nexstar station news directors filled out a grid of what time each station wanted Kucko to provide a live shot.

“He’s pretty much non-stop doing live reports from 10 Eastern to 11:30,” according to Walsh. Nexstar also had sports reporters from Erie, Pa.; Burlington, Vt.; and Wilkes-Barre, Pa., to help coordinate the coverage.

“We provide live coverage to Nexstar stations in all time zones,” Kucko says. “The stations put in their requests and we prioritize them. Fox stations get preferential treatment.” (The Super Bowl carried by Fox this year.)

When asked whether it’s difficult for Kucko to keep all those stations, markets and the anchors’ names straight, Walsh says: “John does a really good job.” Kucko is provided the anchor names and local features for each market. “But this is the fifth year John’s been providing this coverage for all the Nexstar stations,” Walsh adds, “so John and the station anchors have become acquainted and the talk-back is more natural and comfortable.”

Walsh says that in addition to the general Super Bowl coverage surrounding the game that he provides the Nexstar stations, he also tries to “keep it local for our stations and their viewers”

Walsh cited Kucko’s interviews with two players from the Super Bowl teams that were graduates of the University of Arkansas and Penn State as examples of that local coverage.

Kucko says he’ll put the Google Glass to use again shortly — at the Daytona 500 on Feb. 23.