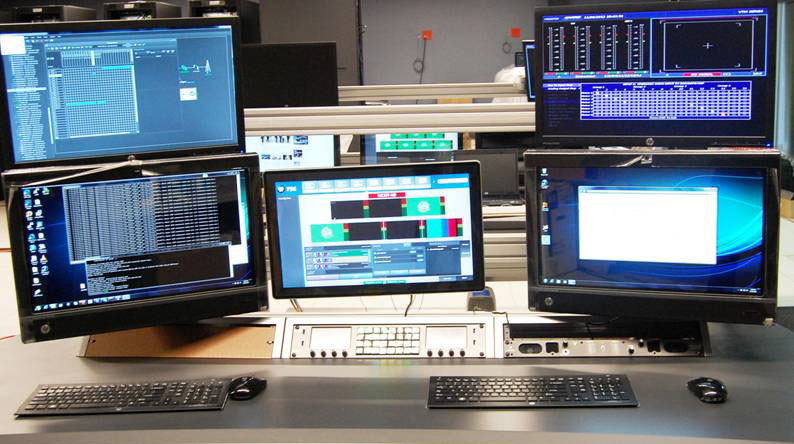 Centralcast LLC will begin operations in Syracuse, N.Y., on Dec. 7, and will eventually handle master control for all nine public stations in the state.

A similar facility in Jacksonville, Fla. — the Digital Convergence Alliance — will come on line next summer with 10 partner stations and 38 program streams.

Michael Boylan, CEO of WJCT Jacksonville and the man behind the Florida initiative, calls centralcasting a “paradigm shift” in noncommercial broadcasting that allows stations to shift resources to where they are most needed. “We all realize our focus should be on content generation and minimizing the processes of distribution.”

Centralcast LLC’s Joint Master Control project in New York is expected to save participating stations a combined $25 million dollars in operating costs over the next 10 years.

WCNY Syracuse, the lead station in the project, will go online Dec. 7. It will be followed by another station every two or three weeks until all nine stations are under the control of the Syracuse facility.

NJTV Public Media, a WNET-managed member-supported public program stream that covers all of New Jersey, will also be controlled from the facility.

A similar master control facility in Jacksonville, Fla. — the Digital Convergence Alliance — will come on line next summer with 10 partner stations and 38 program streams.

It will be interconnected via fiber optic cable with the New York facility to provide redundancy of operation.

Both the New York and Florida facilities were awarded grants of about $7 million each from the Corporation for Public Broadcasting.

The New York facility is part of a larger broadcast station complex for WCNY costing a total of about $20 million. Azzurro Systems Integration was systems integrator for the joint master control operations facility.

New York’s hub-and-spoke system uses servers to store programming and fiber optics links with the stations, which will continue to produce their own local programming. They can take local control of their signals if they desire.

All the master control operators are seeking to sign up additional public broadcast stations since their systems scale easily.“We are currently in talks with six additional stations from six different states …, four of those we are currently working through contracts with,” said Robert Daino, CEO of WCNY and the moving force behind Centralcast LLC.

“Technology has brought geography down to zero,” he said. “It’s really just a fiber optic connection that would bring us and another station together. We can now monitor anywhere in country.

“With our new business model, we can bring on stations with a self-sustaining process where we aren’t making stations come up with any kind of large capital to buy in. That’s been part of the problem; they just don’t have the capital.”

In addition to master control, the New York center can monitor a station’s tower signals and members of the network can share programming and do live interviews from each other’s stations, Daino said.

In the case of national events, one station can handle the feed for all the others, saving manpower at the individual stations, he said. “With this operation, all the station members are part of one holistic network operation now.”

But it’s cost savings that are driving the centralcasting. “Today, with three streams of television, a single station may need two or three operators,” said Daino. “With our system, one person can manage 12 to 17 television streams.”

David Brugger, a former president of the Association of Public Television Stations and now a consultant for public stations, did a report for a station owner in Central Florida and found that joint master control in Jacksonville could save his client $300,000 to $500,000 a year, mostly in salaries.

“Money is very tight at public television stations these days,” Brugger said. “The economy is the biggest factor. A lot of states and corporate underwriters are cutting back. That’s why the stations are looking at things like this. One day all the public stations will be run from about three regional centers. It will become competitive and will come down to who can work out the best deal.”

The key tech partner for both the New York and Florida operations is Evertz, which is supplying its Magnum Unified Control System, VistaLINK PRO SNMP monitoring and control software and Mediator content management platform.

According to Daino, whose background is in software engineering at General Electric, the systems use a “monitoring by exception” approach.

Rather than have operators view numerous program streams at once, the monitoring is done by “exception”—that is, operators are alerted only when something goes wrong. Quality control is done by the software.

“With our monitoring-by-exception scenario, we are building an expert software system,” Daino said. “We want the technology to learn and be able to subscribe to business rules and scenarios depending on when certain events occur.

“When failures occur, the system reacts and notifies us of what it did in response. If the system doesn’t know what to do, it will report to us immediately that the situation needs to be addressed.

“We will see the problem, the system will pinpoint where it occurred and then we can react to it. Then we can give feedback to the system of what we want it do with that same scenario in the future. The system relieves people from having to react. We can take that time savings and have our people really focus on the front end—the content, the quality improvement of it.”

Although most of the master control is software, hardware is still needed for the massive amount of storage needed for each station’s video programming and for the encoding and decoding of the video, Daino said.

“The technology is much more IT-based and not of the traditional broadcast philosophy,” he said. “A tremendous amount of the capabilities are being built into the software side using more commercial off-the-shelf hardware. If you look at the master control side where the operator is sitting, we have a single pod with five monitors on it and that’s it.”

In the design of the Florida facility, an important factor for stations has been security and redundancy, Boylan said. For that reason, the the facility will be located at Colo5, a secure and hardened Jacksonville-based data center.

For traffic, both the New York and Florida systems will install Myers ProTrack traffic and scheduling software, since most public stations already use it. Evertz and Myers have provided assurances that their products work together flawlessly.

Although it’s expected that most master control operations will eventually become interconnected so they can handle each others signals in an emergency, that’s not the case with WGBH, said the Boston station’s CTO, Joe Igoe.

“Our team has talked with Bob Daino in Syracuse, but there are no plans at this point [to interconnect], although we are always open to that,” he said.