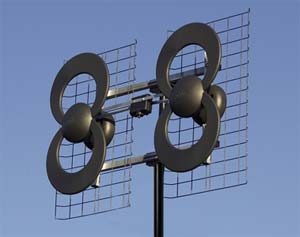 At issue are three 60-second spots that Antennas Direct of Ellisville, Mo., sought to air in the St. Louis market through Charter Communications on ESPN, the History Channel and other cable networks. The ads encourage viewers to cancel cable and save money by buying an antenna. Charter spokeswoman Anita Lamont said the company decides on a case-by-case basis whether to accept advertising of competitors. "In this instance, we made a decision not to accept business advertising from this company for this particular product," she said.

ST. LOUIS (AP) — A TV antenna maker wanted to use the competition’s own medium — cable TV — for its anti-cable message. Now, officials at Antennas Direct say Charter Communications’ refusal to air the ads is evidence of the cable industry’s growing concern over antennas.

At issue are three 60-second spots that Antennas Direct of Ellisville, Mo., sought to air in the St. Louis market through Charter Communications on ESPN, the History Channel and other cable networks. The ads encourage viewers to cancel cable and save money by buying an antenna. One shows a man chained, telling an unseen voice of a cable company, “You’re gonna lose a ton of money when people realize they don’t have to pay you just to watch TV.”

Antennas Direct spokesman Scott Kolbe said Thursday that a Charter executive responded that the company would not run ads for “direct cable competitors.”

Charter spokeswoman Anita Lamont said the company decides on a case-by-case basis whether to accept advertising of competitors. “In this instance, we made a decision not to accept business advertising from this company for this particular product,” she said.

Brian Dietz, a spokesman for the National Cable & Telecommunications Association, said that as Americans watch more TV every year, “the value of cable’s video service continues to be the best of any form of entertainment.”

But Kolbe said customers are increasingly turning to antennas because streaming services such as Netflix or Hulu allow them to watch their favorite TV shows for a monthly fee that’s far less than cable, and the antenna gives high-definition access to local channels.

Statistics from the National Cable & Telecommunications Association show that the number of cable customers was 58 million in 2011, the most recent year available, down from a peak of 66.9 million in 2001.

Cable has faced increasing competition from competitors such as satellite services and more recently from antennas, throwbacks to the “rabbit ears” of the early days of TV.

Today’s antennas are more complex. Selling for $50 to $100, they connect to HD outputs. Pictures gathered from over-the-air signals are usually strong, Kolbe said, and there are no monthly fees.

Antennas don’t pick up cable channels – no “Pawn Stars,” no “Homeland,” no “Breaking Bad.” And if the signal fades, there is no picture.

The National Association of Broadcasters cited a 2012 study showing that 17.8 percent of U.S. household with TVs use over-the-air signals, up from 15 percent a year earlier. The study by GfK Media found that nearly 21 million households now receive TV exclusively through broadcast signals rather than cable or satellite.

“Five years ago I don’t think anybody considered an antenna company a threat to cable,” Kolbe said. “I think streaming has been the catalyst that has helped legitimize antenna television.”

They should be worried…

I wondered for years why TV stations ran ads for cable and satellite pay TV services. But they continue to do so and even in local newscasts sometimes mention cable programming. We don’t have cable and won’t go back. I can see why Charter doesn’t want their subscribers to get antennas since the HDTV signal is better over the air. I don’t know about the Charter system in the St. Louis area, but there are around 10 TV stations that we receive with our antenna that aren’t carried on the local Cox Communications cable system. Antennas Direct should be taking advantage of that if that situation exists in St. Louis. There are a lot of cable and satellite subscribers in our area who also have antennas to get the better HDTV and additional programming.

The antitrust ramifications of this exclusionary ad policy auger for regulatory action against stations that refuse advertising as a means of quashing potential market competitors.

I don’t think so. Imagine if your local newspaper bought a TV campaign encouraging viewers to stop watching the 6 and 11 o’clock news of your TV station because it’s lame. Would you be required to accept the ad? Imagine if your cable operator wanted to buy time on your TV station telling viewers the shows are more entertaining on cable channels than on broadcast, giving specific examples of shows to watch instead of the lineup on your station — would you run that campaig., too?

The courts will decide whether commercial speech can be restricted in such an absolute manner. Seems that the principle of “reasonableness” would be applied by the courts. Perhaps there are precedents already.

Nonsense. Charter – and any other media entity have the right to reject advertising. The only exception applies to broadcaster election rules.

This isn’t the first time this has happened. TWC refused to air ads for the Mohu Leaf antenna and threatened to drop any stations that did. Let’s hope this AP story goes everywhere. It would be a major publicity coup for Antennas Direct and a black eye for Charter (as if Charter, voted the worst company by consumers, needed any more).

Not too hard to figure out, it’s called greed! Formerly being in TV Sales I often wondered why we ran ads for our competitors. I did ask the question once and the answer was something like “They spend a lot of money with us”. Cable and Satellite TV have robed ratings from National and local news programming and yet they keep excepting their money and advertising. What is amazing is folks including me keep the cable even though every time you blink there is another rate increase. Here is the deal; Broadcast TV has dropped the ball on promoting free over the air TV. Because of Digital most local stations have added one or more stations or signals giving the viewer more opportunities, unfortunately the programming is not so great. I remember back in the seventy’s when cable was being offered as pay TV with no commercials! Ha! Heck I see myself suffering through up to five minute advertising breaks then back to the program for one minute and then to another three minute break. Oh well I will keep feeding the Monster so I can have a good Internet connection.

And as long as full power stations remain retrans fee junkies, they will never promote OTA TV. That is the tyrannical hold MVPDs have on stations who are dependent on that revenue stream

I live in a city where Bright House is the dominat cable provider. Even though I mostly watch ABC, CBS, FOX, and NBC, there are times that I watch shows on channels like TNT, WGN America, etc. I cannot get decent signals OTA for my NBC station (the only station in our marker on VHF; Digital 11), so I need BH to get that station. All the other stations here broadcast in Digital on UHF (some of them were VHF in analog), so they’re easier to get OTA. There are 16 full power stations in this market and all of them are on BH. This is how BH deals with Retans Consent: the stations that have Retrans Consent have their .1s (Main) AND all their subchannels on BH. The stations that are carried under the “Must Carry” (the Religious stations and our ION station) only have their .1 (Main) on BH. Their subchannels are not carried. I need NBC, which is why I have BH, but I also need OTA to watch Qubo.