Fox Turning Its Hit ‘Empire’ Into A Retail Star 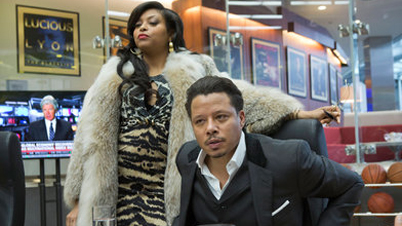 Fox's carefully plotted and expanding merchandising "lifestyle" effort for Empire — in only its second season — goes way beyond standard "Team Cookie" T-shirt fanwear and can take a TV show years of popularity to earn. The younger-skewing appeal of Empire, the enthusiasm of up-and-coming fashion brands like Hood by Air and the acceleration of fashion and retailing in general have combined to make the series a retailing whiz kid.

LOS ANGELES (AP) — Before Fox TV’s “Empire” was a proven success, before any product licensing deals were signed, at least one eager retailer was getting in on the act.

Shayne Oliver, the founder of clothing label Hood by Air, says he was so inspired by the drama and its strong female characters, including Taraji P. Henson’s Cookie Lyon, that he had loudspeakers boom a snippet of “Empire” dialogue at his New York runway show last February.

Now Hood by Air is an official part of the Fox company’s carefully plotted and expanding merchandising “lifestyle” effort for “Empire” — in only its second season — that goes way beyond standard “Team Cookie” T-shirt fanwear and can take a TV show years of popularity to earn.

The younger-skewing appeal of “Empire,” the enthusiasm of up-and-coming brands like Hood by Air and the acceleration of fashion and retailing in general have combined to make the series a retailing whiz kid.

“It just feels great to be involved with something we actually like. … something that inspires us and we’re passionate about,” Oliver said.

Cookie, who may be TV’s most influential fashion figure since the shoulder-pad-wearing women of “Dynasty,” has earned a “Cookie’s Closet” blog from Fox. It dissects her wardrobe episode-by-episode so viewers know that was a $2,500 Gucci black leather dress she wore — and where they can find a $98 version.

Saks Fifth Avenue, MCM and Jimmy Choo are among the high-end retailers and licensees joining the “Empire” bandwagon that’s just getting rolling, according to the 21st Century Fox division that’s orchestrating the selling of the saga about family, music and power.

There are still T-shirts to be had, from Fox’s own online “Empire” store and in the $30 range. But go further afield and there’s a $200 dress, $1,200 sport coat, $1,500 handbag and $950 high heels for fans willing to splurge to get the show’s glamorous looks for themselves.

Other items under consideration by Fox include watches, fragrances and eyeglasses.

The series became an immediate touchstone for pop culture and style after its debut last January, said Jeffrey Godsick, president of 20th Century Fox Consumer Products, allowing the company to “approach it as a brand, as opposed to doing merchandise for a television show.”

The rush to extend “Empire” from TV and into stores meant that, initially, already manufactured clothes and accessories were “curated” and given the drama’s seal of approval. Some were put on prominent display in nearly a dozen windows of Saks’ Manhattan flagship location and in its Beverly Hills store.

Long-established leather goods maker MCM was included in the windows and got the benefit of in-show product placement as well. In one scene featuring Henson and Bryshere Y. Gray, who plays Cookie’s son Hakeem, their co-star was a rivet-studded MCM Berlin briefcase.

MCM had to increase production on the case to keep up with demand, which the company attributes in part to the “Empire” effect.

“The reach of the show is in the 18-to-49 demographic, our key target customer,” said Patrick J. Valeo III, president of MCM, The Americas. “We don’t want to be your parents’ or grandparents’ handbag. It’s about new-school luxury.”

Licensees are now selling custom “Empire” items, including Hood by Air clothing emblazoned with images of characters and Deborah Lippman brand nail polishes (fuchsia Hustle Hard and glittery gold Power of the Empire among the colors).

“Both industries are under pressure to say, ‘Hey, look at me’ in a sea of increased competition,” he said. Fox’s approach also makes sense because viewers “shift gears and channels quickly.”

“If you’re hot, you need to jump on the opportunity, seize the moment and not wait for next year, because you might be yesterday’s news,” Adamson said.

That wasn’t the case with “Sons of Anarchy,” which was several years into its FX run before there was an expansion into “biker culture” ventures such as branded alcohol, Fox’s Godsick said. It took “The Simpsons” (perhaps understandably) two decades to get a foothold in designer fashion.

The retail effort certainly is aimed at making money but is not a “pure revenue play,” he said. It’s also intended to sustain “Empire” and its audience.

In its second season, “Empire” is Fox’s top-rated series and is the No. 1 scripted broadcast show among young adults, according to Nielsen company figures. Its overall average viewership for the seven days following an episode’s airing is up slightly, 4 percent, over last season.

“That’s why we’re so careful to pick partners,” Godsick said. “Who you’re tying in with, doing a collaboration with, sends a message to consumers and ultimately affects your brand.”