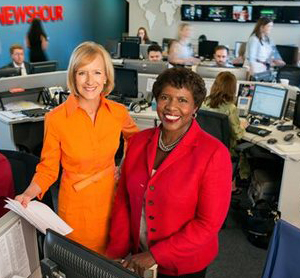 Gwen Ifill and Judy Woodruff start their stint as the regular co-hosts of PBS NewsHour on Monday — the first women to co-anchor a national daily TV news program. They will be the faces for a newscast known for many years as the home of founders Jim Lehrer and Robert MacNeil.

NEW YORK (AP) — Gwen Ifill and Judy Woodruff didn’t think much about the milestone upon being appointed the first women to co-anchor a national daily news program on television — until flowers began filling their offices and strangers offered congratulations.

The veteran journalists are the regular co-hosts of PBS NewsHour, effective Monday. They will be the faces for a newscast known for many years as the home of founders Jim Lehrer and Robert MacNeil.

Two days earlier, PBS will premiere a new weekend edition of NewsHour, based in New York instead of Washington. Hari Sreenivasan will be the host.

In 2006, Katie Couric at the “CBS Evening News” became the first woman to solely anchor a national newscast. Ifill said she was surprised by how many people made a big deal of two women anchors when PBS announced the change in early August.

“I’m very touched by that,” she said. “I’m most touched by young women who stop me on the street and tell me how happy they are about this. I’m amazed at the investment people have in this.”

Following Lehrer’s retirement two years ago, Ifill and Woodruff were part of a five-person anchor rotation with Jeffrey Brown, Ray Suarez and Margaret Warner. Two of the five anchored each night, depending on their schedules. There was nothing wrong with it, said the show’s executive producer, Linda Winslow. But she came to conclude that a regular team makes for a sharper identity; people are more likely to say they watch Brian Williams instead of the NBC “Nightly News,” for example.

The new anchors have lengthy Washington resumes. Woodruff, 66, was a White House correspondent for NBC News during the Carter administration and has two stints at PBS with 12 years at CNN in between. Ifill, 57, started in print, working at The Washington Post and The New York Times, before joining NBC News and then PBS in 1999. Ifill hosts “Washington Week,” meaning Woodruff will fly solo on the “NewsHour” on Fridays.

“She’s exactly the kind of person you’d want to have by your side if there’s a big, breaking story,” Woodruff said of her partner. “You want to be beside someone you can trust, whose judgment you can trust.”

Winslow said it seemed to be the combination that clicked. The women think alike, but have distinct styles. During interviews, Ifill is more conversational, Woodruff more questioning. “She’s leaning forward and Gwen is more inviting you to come forward,” she said.

“NewsHour” anchors have often seemed more like solo artists than a team. Winslow said there will be an effort to have Ifill and Woodruff appear on-screen together more and interact.

The show helped draw attention to the pairing when Ifill and Woodruff interviewed President Barack Obama last week, with the poison gas attack in Syria the chief topic.

Even for veteran reporters, a presidential interview is a nerve-wracking experience. You live in fear of missing something obvious. You have to balance to-the-minute reporting of breaking news with more reflective questions knowing, as Ifill said, “all your planning can go out the window in an hour.” And for the two anchors, each had to be conscious of giving her partner equal time.

Both women were also named managing editors of NewsHour, joining Winslow in shaping the day’s broadcast.

Ifill and Woodruff will bring their own ideas for changes, comfortable knowing that no overhaul is necessary.

“The NewsHour occupies a place that doesn’t exist anymore in broadcast television, which is an hour-long, uninterrupted chance to let people finish their sentences,” Ifill said. “We’re very careful of that franchise, but we are also aware of ways that we can freshen it just with our presence.”

Excellent choice of these ladies. However, America is way behind European stations, who have been featuring female anchors for at least three decades.