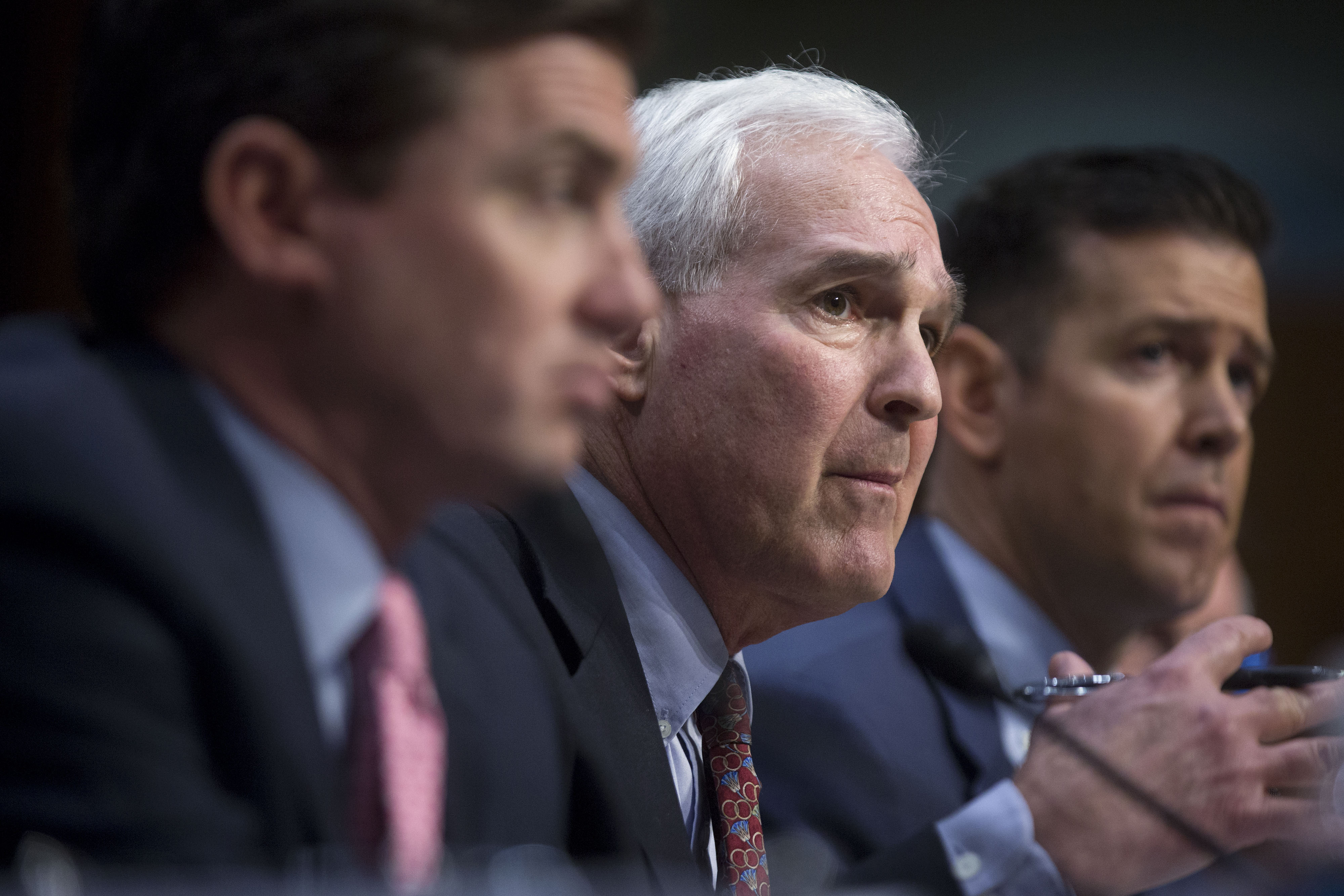 The media watchdog group headed by Gene Kimmelman (c) that has been lobbying in favor of retransmission consent reform received more than $100,000 in donations from pay TV industry proponents of retrans reform last year, including contributions of about $25,000 apiece from Time Warner Cable, DirecTV and Dish Network. Other lesser contributors included Cablevision Systems, Charter Communications, Verizon and the American Cable Association.

Public Knowledge, a media industry watchdog group, solicited and accepted more than $650,000 from industry companies and associations last year, while lobbying in favor of positions that some of its backers support — a practice that critics say undermines the organization’s credibility.

“Public Knowledge pretends to be a public interest group, but it’s primarily an advocacy group supported by certain segments of the industry, including cable and wireless,” said Jack Goodman, a former general counsel for the National Association of Broadcasters.

But PK backers told TVNewsCheck that the group’s industry donors play no role in decisions about what policy positions the organization pursues, and that the group demonstrates its independence by opposing as well as supporting its donors’ interests at times.

“I can assure you that none of the policy positions or conversations or decisions of what to do or what not to do are in any way connected to fund raising,” said Gene Kimmelman, PK president-CEO.

The group’s fundraising is on the broadcasting industry’s radar because Public Knowledge has been lobbying against broadcasters on some key issues, while simultaneously raising money from broadcasting’s opponents, PK’s records confirm.

Public Knowledge, for instance, has been lobbying in favor of retransmission consent reform. PK’s records show, however, that it received more than $100,000 in donations from pay TV industry proponents of retrans reform last year, including contributions of at least $25,000 apiece from pay TV giants Time Warner Cable, DirecTV and Dish Network.

Retrans payments have become an increasingly important revenue source for broadcasters. In fact, the payments are projected by industry analyst SNL Kagan to reach $4.3 billion this year, and $7.6 billion by 2019.

Along with promoting reform on its own, Public Knowledge is a partner of the American Television Alliance, a pay TV industry-backed lobbying group that has been pressing for retrans reform. TWC, DirecTV, and other contributors to PK’s warchest, are also ATVA members.

The pay TV industry and PK are arguing that the regulations are anti-consumer.

Public Knowledge, according to its records, also accepted contributions of at least $25,000 apiece during 2013 from Google, AT&T, the Consumer Electronics Association and other major industry players that have been vigorously promoting the FCC’s plan to repurpose broadcast spectrum with an incentive auction next year, a process that many broadcasters would prefer to stall. PK has been lobbying in favor of the auction.

In addition, during 2103, Public Knowledge, according to its donor list, also accepted a contribution of about $5,000 from Aereo — a company PK has been promoting as pro-consumer.

Aereo, which has been vehemently opposed by broadcasters, was trying to build a business out of retransmitting broadcast TV signals online, until the Supreme Court recently stepped in and ruled that the service was illegally ripping off broadcast signals.

Another tidbit of interest to broadcasters is that Michael Petricone, CEA’s top lobbyist, has a seat on PK’s board.

CEA, one of PK’s top industry donors in 2013, is also one of the broadcasting industry’s more influential critics.

Kimmelman, who stepped in as PK’s CEO earlier this year, told TVNewsCheck that he didn’t know how Petricone got on the board. A CEA spokeswoman said Petricone got the nod because “he has expertise on policy issues impacting innovators and consumers.”

Said Petricone: “Neither CEA nor anybody else in Washington tells PK what to do.”

Said former FCC Chairman Reed Hundt, one of PK’s  original board members: “At the end of the day, you have to ask yourself … are these people [Kimmelman and Gigi Sohn, PK’s previous CEO and founder] who can be bought? And the answer is absolutely not. Anybody who knows them would know that.”

Added former FCC Commissioner Michael Copps, who currently sits on PK’s board: “Gene Kimmelman is as independent and straight a shooter as you will find, and he’s used to saying what’s on his mind and following through on that. I like to think I have that reputation, too, and if ever I found a public interest board that I thought was kowtowing to donor pressure, it and I would quickly part company.”

While some watchdog groups, like PK, accept at least some industry donations, other major watchdog groups — including Consumers Union, Common Cause and Free Press — refuse to accept corporate money to avoid conflicts of interest.

“We don’t take industry money because we don’t want to do anything that could compromise our independence or prevent us from evaluating policies on their merits for the broader public,” said Craig Aaron, Free Press president-CEO.

Kimmelman said that he could understand that broadcasters are upset about some of PK’s current positions. But he said that public interest groups and NAB have been allied in the past, and are likely to have common cause again in the future.

NAB made a “modest” donation to PK in 2012, but didn’t last year because the association was not asked, said Dennis Wharton, an NAB spokesman.

“NAB makes strategic decisions to support third-party groups based on past relationships and whether these groups have an appreciation for the tens of millions of viewers reliant on free and local broadcasting,” Wharton added.

Kimmelman said that while the pay TV industry approves of some of PK’s current positions, the watchdog group also supports policies that cable opposes — including the adoption of strong net neutrality regulations that will bar the owners of the nation’s broadband pipes from abusing their power.

PK, over the opposition of many in the cable industry, also favors a la carte regulations that would clear the way for consumers to buy and pay for only the cable TV services they really want.

“We call the issues as we see them based on our vision of freedom of expression and an open nondiscriminatory Internet,” Kimmelman said.

Among the other watchdog groups that accept at least some industry donations is New America Foundation, which is also an ATVA member and, like PK, has been promoting retrans reform.

The foundation accepted contributions from TWC and Dish during 2013, according to the foundation. But a foundation spokesman insisted that those “relatively small grants” were not tied to lobbying for retrans reform.

“Our advocacy on retransmission consent began long before Dish’s first contribution last year, which was earmarked for our work on spectrum policy, and we no longer receive support from TWC,” Michael Calabrese, a foundation project director, told TVNewsCheck.

In 2013, the largest contributions permitted were about $25,000 apiece, Kimmelman said.

Public Knowledge’s IRS report for 2012, the most recent available, says the organization raised $704,370 from the contributions to its annual awards program during that year, about 35% of its total revenue of $2,014,085. The vast majority of the contributions come from industry sources. The fundraiser/cocktail reception expenses totaled $33,568, according to the IRS report, leaving a net of $670,802.

Kimmelman said most of PK’s support comes from foundations.

“The irony here,” said Robert Corn-Revere, a former FCC attorney, “is a so-called watchdog organization that is constantly railing about the evils of industry is willing to take money from the industry to advocate whatever it chooses.”

The article cites a PK contribution from Time Warner Cable and yet PK is the # 1 opponent of TWC’s merger with Comcast. I have known Gene Kimmelman for 30 years – might even have agreed with him once. His, and PK’s, policy positions are not for sale.

when will someone realize that cable subscribers are footing the bill for trans dollars to broadcasters ?

Just like cable subscribers are footing the Bill for cable network carriage fees. And in 1992 Congress unequivocally decided that it was not fair for cable operators to pay for cable networks but not pay for broadcast channels!

And this is a balanced, objective story to suggest that paytv providers are “buying” PK’s support, while giving NAB a pass on its “strategic” and “modest” contributions? Good heavens. How much does NAB give to TVFreedom.org and other so-called “FreeTV” groups and efforts? How about other to commenters and bloggers who routinely opine about the “loss of free tv.” I could count dozens, and it’s a shame that this story didn’t cover that angle too. Who bought whom here?

What a macabre scene. We’ve got a former cable lobbyist as head of the FCC, the former CEO of an organization bought and paid for by pay-TV as an FCC advisor, a former chairman of the FCC who has made no secret of hating television broadcasters endorsing that same organization and another endorsement from a guy who heads a group that wants to pillage and burn broadcast television by selling off nearly all its spectrum. Now there’s an Addams Family picture if I ever saw one. The only thing missing are the implements of torture. Oh, right. They have their press releases and quotes. Reading those is torture enough.