Silver: Media Has A Probability Problem 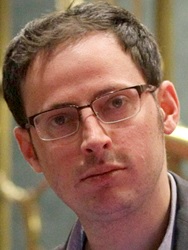 Digital journalism’s data guru Nate Silver, founder of the FiveThirtyEight blog, told attendees at the Online News Association’s annual conference on Friday that they need to get over their fear of statistics and to apply better objectivity when they do use them.

Nate Silver, the statistician who attained national fame for his accurate projections about the 2008 and 2012 presidential elections, is parting ways with The New York Times and moving to ESPN, according to ESPN employees with direct knowledge of his plans. At ESPN, Silver is expected to have a wide-ranging portfolio. Along with his writing and number-crunching, he will most likely be a regular contributor to Olbermann, the late-night ESPN2 talk show hosted by Keith Olbermann that will have its debut at the end of August. In political years, he will also have a role at ABC News, which, like ESPN, is owned by Disney.