The pandemic that instantly changed the 2020 presidential campaign forced news organizations to reevaluate coverage plans, too. It’s an ongoing process: several reporters who followed Trump to Nevada on Sunday stayed outside when they learned the president’s rally would be held indoors. For months, news executives wondered if they would be covering a campaign without campaigning, although it has grown more public after Labor Day.

Homebound at his estate in Wilmington, Del., Joe Biden’s quarantined campaign is adjusting to a new reality in which the primetime TV slots that would carry his rallies and speeches under normal conditions are now largely dedicated to subjects other than the 2020 presidential campaign. That’s left Biden with little choice but to spread his message around — bracketing the president by offering himself to local newscasts in battleground states that run his interviews while viewers wait for Trump’s briefings and hamming it up on radio or latenight (or late, late night) TV.

Before March 13, Donald Trump’s re-election campaign was on the ground in Pennsylvania, talking face-to-face with voters and volunteers at house parties and training sessions about how the president helped usher in a new American economy. Now, and over the last three weeks as the COVID-19 pandemic has restricted gatherings and reorganized voters’ priorities, the campaign has shifted its strategy to digital-only and its message to how Trump has handled the pandemic.

Michael Bloomberg’s presidential campaign is hiring hundreds of workers in California for $2,500 a month to post regularly on their personal social-media accounts in support of the candidate and send text messages to their friends about him. The effort, which could cost millions of dollars, is launching ahead of California’s March 3 primary and could later be deployed nationwide.

The social media giants are stuck in a vise as both Democrats and the Trump campaign look for an edge by accusing the platforms of favoring the other side. On one side are Democrats, who are demanding that Facebook and Twitter censor President Trump and his campaign. On the other end are Trump and the Republicans, who have long held that conservative voices are being suppressed by Silicon Valley liberals reacting to elite media outrage at the president and his supporters. 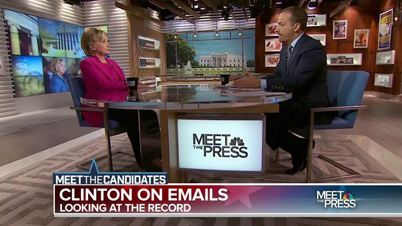 Donald Trump’s battles with the media are giving Hillary Clinton cover to not institute a protective pool, which would cover the candidate’s every move and ride on the campaign plane in the same way the White House press pool does and which typically begins when the candidates becomes the party’s official nominee.

How Journos Should ‘Recalculate’ For Election

Hillary Clinton put to rest any doubt that Silicon Valley leaders — including many with close media and entertainment ties — want her to become the next president. Her campaign released this morning a list of supporters with A-list industry names including Netflix’s Reed Hastings, The Chernin Group’s Peter Chernin, Facebook’s Sheryl Sandberg, IAC’s Barry Diller, BET chief Debra Lee, and Alphabet’s Eric Schmidt — as well as legendary investor Warren Buffett.

The “phoner” is back, and no one in network TV news is too happy about it. Donald Trump pioneered the lightning round of TV interviews via phone — aka phoners — during his remarkable run for the Republican presidential nomination during the past 11 months. But just as the networks seemed to stiffen their backs against Trump, Democratic front-runner Hillary Clinton has started playing the phone game in earnest, too.

Hillary Clinton Press Secretary Brian Fallon told CNN’s Brian Stelter over the weekend that part of the campaign’s strategy in the general election will be “to continue to do earned media opportunities with local TV affiliates and local radio outlets.” Clinton will be “very attentive” to local issues as she has in the primaries, he said. The remarks come at the 2:35 minute mark in this clip from Reliable Sources.

Hillary, the Donald, Bernie, Ted and company have made politics must-see TV. As primary season heats up, the presidential candidates are everywhere, from cable news to Saturday Night Live. Why can’t we get enough of them?

A Banner Year For Bashing The Media

Why Latenight Is Place To Be For Candidates 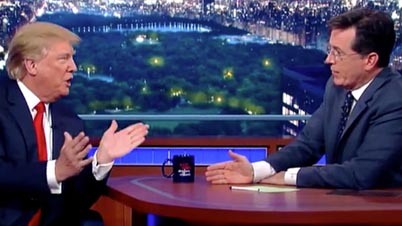 The hottest place to be for a presidential hopeful these days isn’t kissing babies at a local diner or standing behind a podium delivering a stump speech — it’s sitting down on a latenight talk show couch. From Democrats Hillary Clinton, Martin O’Malley and Sen. Bernie Sanders to a growing number of the dozen-plus GOP candidates, including Donald Trump, Jeb Bush and Sen. Ted Cruz, the post-primetime TV circuit has become a crucial stop on the way to the White House.

A new platform is making a play to allow political campaigns and issue groups to raise money from online videos as they’re viewed by potential donors and supporters. Total-Apps has unveiled Video Checkout, a service it’s hoping will allow the merchant payment processor entrée into the campaign market. The service lets a user embed a video on its Facebook page or tweet out a link to its page where the video is hosted. As the video plays, viewers can fill out a donation form, and the donor’s data is then exportable.

Print’s demise has been reported a number of times. Now, it’s true — at least for 95% of campaigns. Despite its passing, most campaigns from Senate through State House still spend a disproportionate amount of time strategizing about how to deal with newspaper editors and reporters. We would also argue that “earned media” campaign strategy focusing on all media outlets is about to be dead, too.

2016 Elections Cash Race Off And Running

Prospective presidential candidates and their supporters are spending money like it’s 2016. Groups allied with 15 of the top presidential prospects have raised $89 million and spent $87 million this election cycle as they gear up for 2016, with a focus on building campaign infrastructure and making inroads in key primary states, according to a Politico analysis of reports filed this month with the Federal Election Commission and Internal Revenue Service.

Fusion, the cable news channel owned by ABC News and Univision, will be running a show dedicated to covering the 2014 midterm elections — and making it accessible to viewers that don’t get the channel as part of their cable package. Fusion will run the series, Midterm Mayhem: The Ultimate Political Smackdown, Sunday through Thursday at 9:30 p.m., and will also stream it on its website Fusion.net.

Election Season Proving To Be A Mixed Bag

With political races heating up in some markets, stations there have plenty to cover and few ad slots left. But in others where races are one-sided, journalists are getting creative, turning to coverage of state and local issues to keep political interest strong.