The swaggering TV spot, complete with an image of Trump presiding over the weekend raid that killed the Islamic State’s leader, underscores the Republican incumbent’s financial advantage over the Democrats vying to replace him. It is highly unusual for a presidential incumbent to make a national ad buy so far out from the election and offers a stark contrast to Trump’s possible Democratic foes.

The series averaged 13.91 million viewers according to national numbers from Nielsen, which is down 1.3% from last year, when the Boston Red Sox defeated the Dodgers in five games (14.1 million average). The Nationals’ first title had an 8.1 overall rating and 16 market share. Including streaming, the series average is 14.01 million.

Down To The Wire Holds ’Em In DC, Houston

While national numbers for this year’s World Series were down from 2018, there were at least two markets where lots of folks were glued to their sets right to the dramatic end on Wednesday night — Houston and Washington where the games were seen on Fox O&Os. Game 6 on KRIV Houston drew a 31.2 among adults 25-54, while on WTTG Washington it delivered an 18.2. Game 7 on KRIV got a 32.0, while on WTTG it drew a 24.9 (the market’s highest rated sports program in the last 12 months, excluding the Super Bowl).

While national number for the first two games of the World Series have been down from last year’s Fall Classic, there are at least two markets where lots of folks are glued to their sets — Houston and Washington. Game 1 Tuesday on Fox-owned KRIV Houston piled up a 27.1 among adults 25-54 (preliminary numbers), while Game 2 on Wednesday did a 22.0. Game 1 on Fox-owned WTTG Washington drew a 17.8 and Game 2 delivered a 17.2.

Fox Locks Up World Series For Next 10 Years

The World Series will air on Fox for the next 10 years, the network announced Monday at its annual upfront presentation. Alongside Alex Rodriguez, postseason regular Joe Buck announced the news to press and advertisers.

Fox has been broadcasting the World Series since Derek Jeter was a rookie in 1996 — and there is momentum for that to continue. Major League Baseball and Fox are moving toward a new multibillion-dollar deal to extend the network’s longtime hold on the World Series for the foreseeable future.

Fox and YouTube TV, the presenting sponsor of the World Series, are putting a number of innovative commercial executions into their advertising batting order. Many of the executions will play off of the situation on the field and will use YouTube TV’s new slogan “Watch Like a Fan.”

Post-Season Baseball A Hit With Advertisers

Fox and TBS aren’t talking dollars, but they say they have sold about 90% of their inventory, more than had at this point last year, with modest rate increases. While MLB telecasts have the oldest median age of the four major sports, the World Series is still a major desired destination for some of the biggest-spending advertisers. While network officials would not discuss ad rates for the playoffs and World Series, media buyers say Fox is getting about $500,000 per 30-second spot.

YouTube TV will be the first “presenting sponsor” of the World Series, with regular TV commercials during the event as well as digital exposure on MLB.com sites and in-stadium promotion. 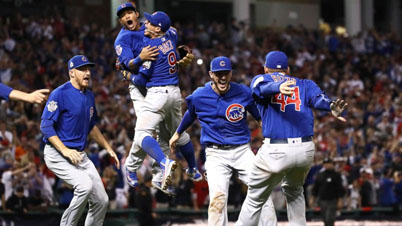 There are a lot of numbers in play with last night’s World Series Game 7 victory by the Chicago Cubs over the Cleveland Indians. One is Game 7 was watched by 40.015 million last night on Fox — the best any baseball game has done since 1991.

Cubs-Indians A Ratings Hit For Fox

The five-game series averaged a 4.1 in 18-49s, up 32% from last year, when it went the full seven. That gives Fox quite a ratings lift, which it needs.

WUHF Cuts Away From World Series For News

Fox suffered a brief outage Tuesday during its primetime broadcast of Game 1 of baseball’s World Series, resulting in a roughly seven-minute delay of the game.

The World Series, By The Numbers

The Kansas City Royals face the New York Mets on Fox. Here’s the scoop on past ratings, ad spending, ad pricing, what Fox paid for rights and historic victory trends. 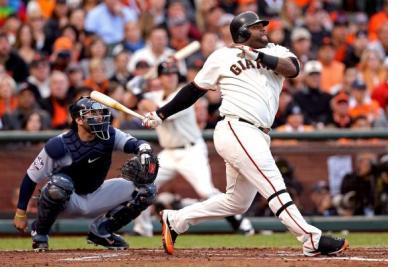 Lucky for Fox the World Series went seven games. A huge audience tuned in for Wednesday night’s decisive Game 7, in which the San Francisco Giants topped the Kansas City Royals 3-2, lifting a series that had been on pace to be the least-watched in Major League Baseball history. Game 7 averaged 23.5 million total viewers, easily the best of the series and up 76% from the 13.4 million who watched Game 6. The final game of the series was the second-most-watched baseball game of the past decade.

So Far, World Series Not A Huge TV Draw

This week, more people watched NCIS: New Orleans and The Big Bang Theory, and — for that matter — The Walking Dead, the AMC show about zombies. The audience for Sunday Night Football, a regular season game between the San Francisco 49ers and the Denver Broncos, was almost twice that of the first two games of the series.

A seven-game World Series would rescue a postseason for Major League Baseball that has lost both Los Angeles teams and doesn’t have the New York Yankees or Boston Red Sox for the first time since 1993. The final four clubs competing for the baseball championship leaves broadcaster Fox television markets ranging from 6 to 31. Unlike football’s Super Bowl, which attracts audiences of about 110 million worldwide every year, World Series television ratings vary due to the match-up and duration.

A seven-game World Series would rescue a postseason for Major League Baseball that has lost both Los Angeles teams and doesn’t have the New York Yankees or Boston Red Sox for the first time since 1993. The final four clubs competing for the baseball championship leaves broadcaster Fox television markets ranging from 6 to 31. Unlike football’s Super Bowl, which attracts audiences of about 110 million worldwide every year, World Series television ratings vary due to the match-up and duration.

An Evening Of Sweet Memories 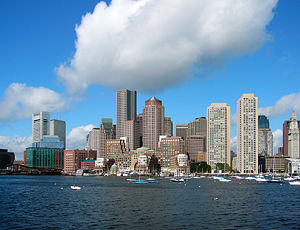 Advertisers paid four to five times the normal rates for World Series spots. Political is also a hot category with a tight mayoral race driving ad spending. The race has made buying TV in Boston somewhat unpredictable this fall.

Technical difficulties knocked some of the early innings of the World Series’ Game 5 off the air for many Hawaii TV viewers. “The problem was not our fault,” said Kristina Lockwood, GM of KHON, the Honolulu Fox affiliate. “Apparently the Time Warner fiber connection at Queen Street was lost. Time Warner fixed it immediately.”

With Red Sox In World Series, Ratings Up

Boston’s 8-1 win over the St. Louis Cardinals on Wednesday drew an 8.6 national rating, a 14 share and 14.4 million viewers. The rating was up 13% from the 7.6/12 for San Francisco’s 8-3 victory over Detroit last year, which was a record low for a World Series opener.

A Buyer’s Primer On The World Series

Ratings have been down in recent years but it still does extremely well with men 18-49. Everything you need to know about ratings, advertising and a few fun facts.

CBS has opted to forego original programming tonight opposite Fox’s telecast of Game 7 of the World Series. In place of fresh episodes of A Gifted Man, CSI: NY and Blue Bloods, the network will now rerun the Gifted Man pilot and air encores of CSI: Miami and CSI: NY.

Three of the first four World Series games between Texas and St. Louis finished among the 10 most popular programs for the week. The only exception was Saturday’s third game, a Cardinals blowout that coincided with the night many of Fox’s young viewers are out and away from the TV.

If Major League Baseball truly wants to make an argument about still being America’s pastime after this year’s World Series, it will need some real voodoo mathematics.The ratings results for the Series games this year have been mostly dismal, with the latest evidence being the games played on Sunday and Monday nights.

Even what many are predicting will be a low-rated World Series performed well enough for an easy victory for Fox last night. The first game of the World Series on Fox averaged a 3.9 adults 18-49 rating and 10 share during primetime, 18% ahead of ABC and CBS, which tied for second on the night with a 3.3/9 apiece.

Is The World Series Still Worth It For Fox?

Given the amount of ratings success Fox has enjoyed with entertainment programs this fall (it’s the only broadcaster to have improved in the adult demo), and considering this year’s World Series Rangers vs. Cardinals match-up, it does raise the question: Is disruptive fall baseball coverage still worth it for Fox?

Fans Push To Get Scully To Call World Series