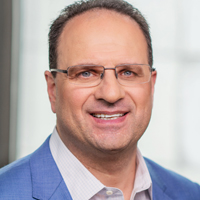 “Gary’s been an integral part of our sales team since day one and his performance has been stellar. He’s done a masterful job designing marketing solutions which help our advertising partners reach the targeted and growing demographic audiences Bounce, Escape, Grit and Laff deliver,” said Katz. “With Court TV being added to the sales arsenal, Gary is the perfect choice to lead our expanding efforts to even greater success. I have total confidence in his ability to lead our accomplished team going forward.”

Saginario was previously VP of ad sales for Katz Networks, managing an extensive agency and client list on behalf of Bounce, Escape, Grit and Laff.  He was Bounce’s first account executive when Katz began to build a general market ad sales team in 2012 and was elevated to VP in 2016.

Before joining Katz, Saginario ascended through the ranks of television sales, developing and managing creative and strategic advertising plans for more than 20 years. He held key positions with NBC Universal, where he played important sales roles for USA Network, Bravo and SyFy, among other properties.

In assuming his new role, Saginario has added Lori Isola as VP of ad sales. Isola joins Katz from NBCUniversal, where she developed, generated and managed revenue of new and existing clients from ad agencies and client partners for the NBCU properties MSNBC, CNBC and Today, among others.

Isola previously worked in sales for Discovery Networks International and has extensive experience on the agency side of the business, having held ascending positions with J. Walter Thompson and DB Needham Worldwide, among others.

“Lori is a versatile executive whose relationships and diverse experience on both sides of the media sales table will help us further advance our ability to deliver unique opportunities for our advertising and marketing partners,” said Saginario.