Local TV, considered one of the most trustworthy sources of news by consumers navigating challenging times, could cement relationships with newer and younger viewers by capitalizing on their ability to deliver superior weather content on TV, social, mobile, OTT and the web.
By The Weather Company | June 15, 2020 | 5:00 a.m. ET.

Broadcasters aiming to hang on to new audiences that have been tuning in in droves during the coronavirus pandemic and stay-at-home orders may want to consider one of their biggest existing assets — their local weather forecasting and reporting — to seal the deal.

In fact, consumers, gripped but exhausted by voluminous coverage of the virus and more recently, mass demonstrations against police brutality across the U.S., have been perceiving weather reports as comfort food.

Breezy’s remarks came during a TVNewsCheck webinar called Turn a Viewership Bump into a Long-Term Trend, sponsored by The Weather Company, an IBM Business. The conversation focused on ways in which local broadcasters can leverage the popularity of their weather forecasting to engage newer and often younger audiences, and not just on TV.

As SmithGeiger Founder Seth Geiger pointed out in an interview with TVNewsCheck, digital platforms, including social media, mobile and online video, are critical for reaching not just younger audiences but those at work or on the go, as stay-at-home orders are lifted. 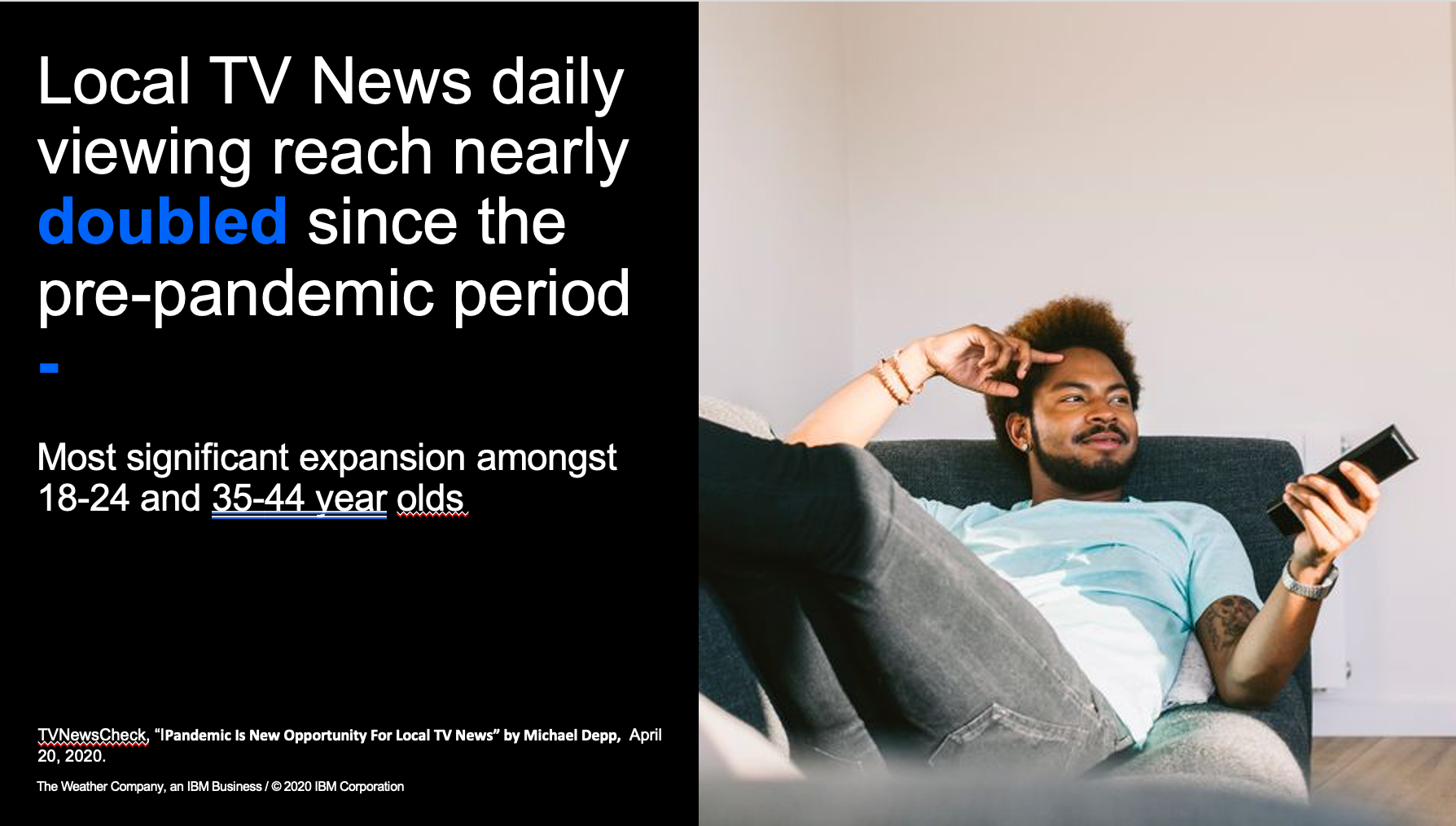 Since the pandemic struck the U.S., not only has overall TV viewership gone up 60%, but local TV news’ daily viewing reach doubled, with the most significant expansion among people aged 18-24 and 35-44.

“It’s great to see people flocking back to TV, to get their news updates from their local TV station,” said Rodney Thompson, senior strategist at The Weather Company, who’s tracked viewing trends throughout the lockdown. “It has become a primary destination for trusted information during the pandemic.”

He characterized the recent developments as a “resurgence in linear TV,” but still believes that young people especially will revert back to old habits in terms of getting information once the pandemic eases. For example, prior to the outbreak, 70% of people aged 18-34 got their weather data from a mobile weather app. However, broadcasters still have time to engage with them, as major metropolises like New York City are only just now beginning the early stages of “reopening.” 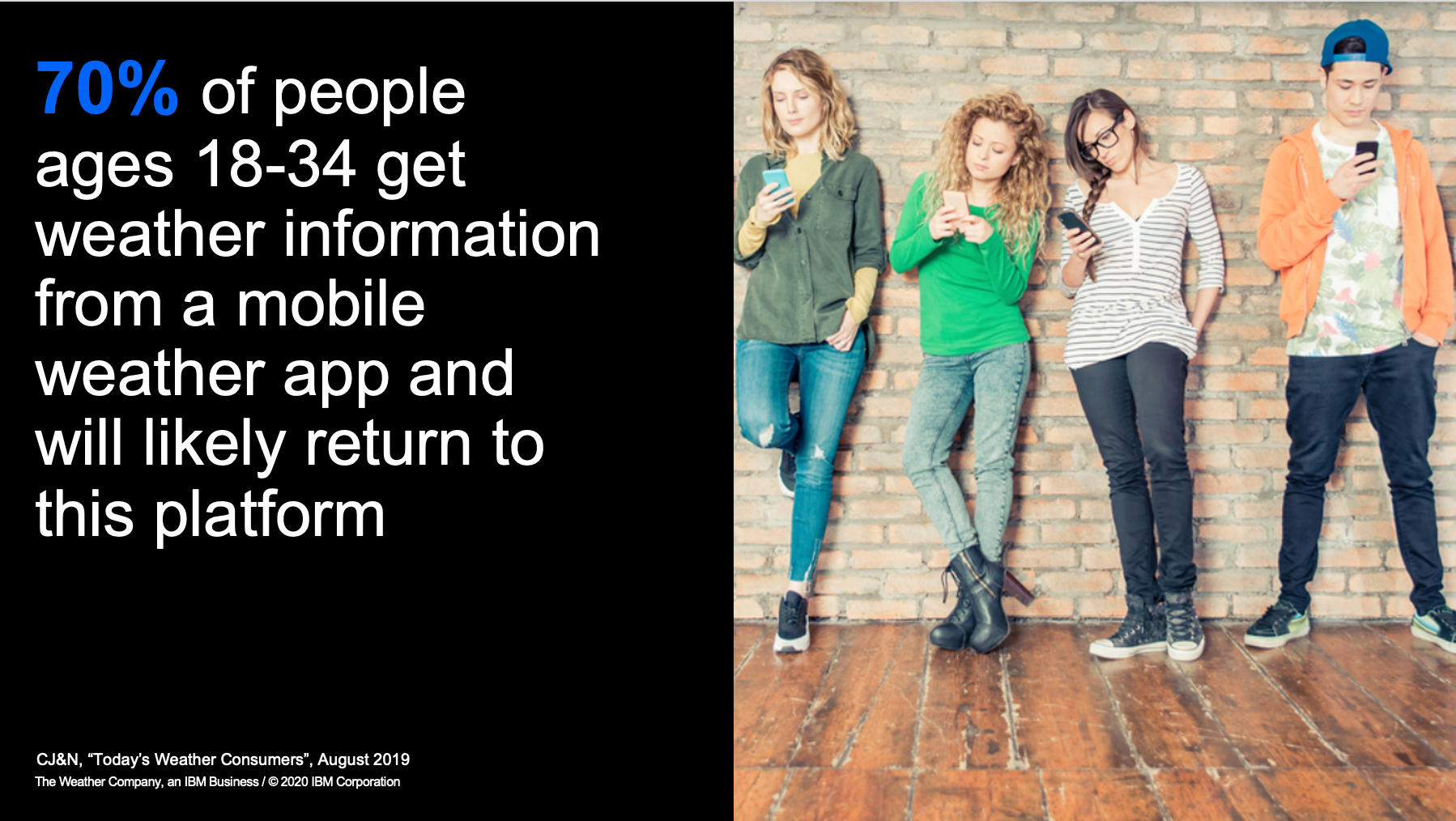 “Local stations need to capitalize on this trend — where we are right now, where they’ve gained the trust and confidence of the new audience,” Thompson said. “The question is: ‘How do we maintain that level of relevance once the pandemic abates?’”

Thompson suggested that linear-TV news stations “position their digital properties, in terms of their value, so that they can migrate that TV audience that they just gained over to those digital platforms.” He added that improved messaging and targeting by stations will be vital during the emerging transition period.

“Weather is the most popular feature in television newscasts, so it may be able to serve as a bridge to these new and younger audiences,” Kathy Haley, TVNewsCheck’s publisher, who served as moderator of the webinar, said in response to Thompson’s data. “If they can learn that the weather on TV is so much better than the pre-installed app on their phone, they may be more likely to download a local station’s weather app for a similar experience.”

“Stations must also learn to capitalize on all the changes current events are driving in media usage,” said Kevin Eubank, Chief Meteorologist at KSL-TV, in Salt Lake City, Utah.

“Disruption, any kind of disruption, creates opportunity,” he said. “If you’re wise enough to see it as an opportunity … you can do different things.” 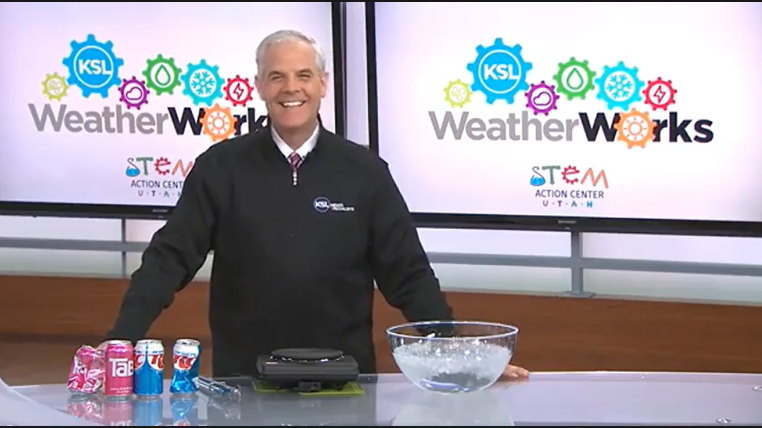 His station reimagined a STEM-slanted education initiative already in place called “WeatherWorks,” which had previously brought station team members into schools to teach students about weather. To continue building those connections with school-aged viewers during the shutdown, however, Eubank found himself back in the studio, conducting weather-related experiments, interviewing colleagues about the jobs they do, and creating other WeatherWorks content over Facebook Live. KSL-TV has also

Related Story  Missed Ross Live 2020? It's all here on demand

repurposed the segments for the station’s OTT platform, as well as its mobile app.

“We wanted to create a resource at our station that would allow teachers and parents and students to have really fun, engaging things that they could view online, they could get later on digital, that we could tease on TV,” Eubank said. “All of that came because of the COVID health crisis, and gave us an opportunity to pivot.”

Creating a Dialogue With Younger Audiences

Danielle Breezy, chief meteorologist at Nexstar Media Group-owned WKRN-TV Nashville, upped her social media-posting frequency, and adjusted the times in which she posted, to play into people’s shifted lifestyle norms. For example, she began posting a little later in the morning because followers on average weren’t getting up as early for work. 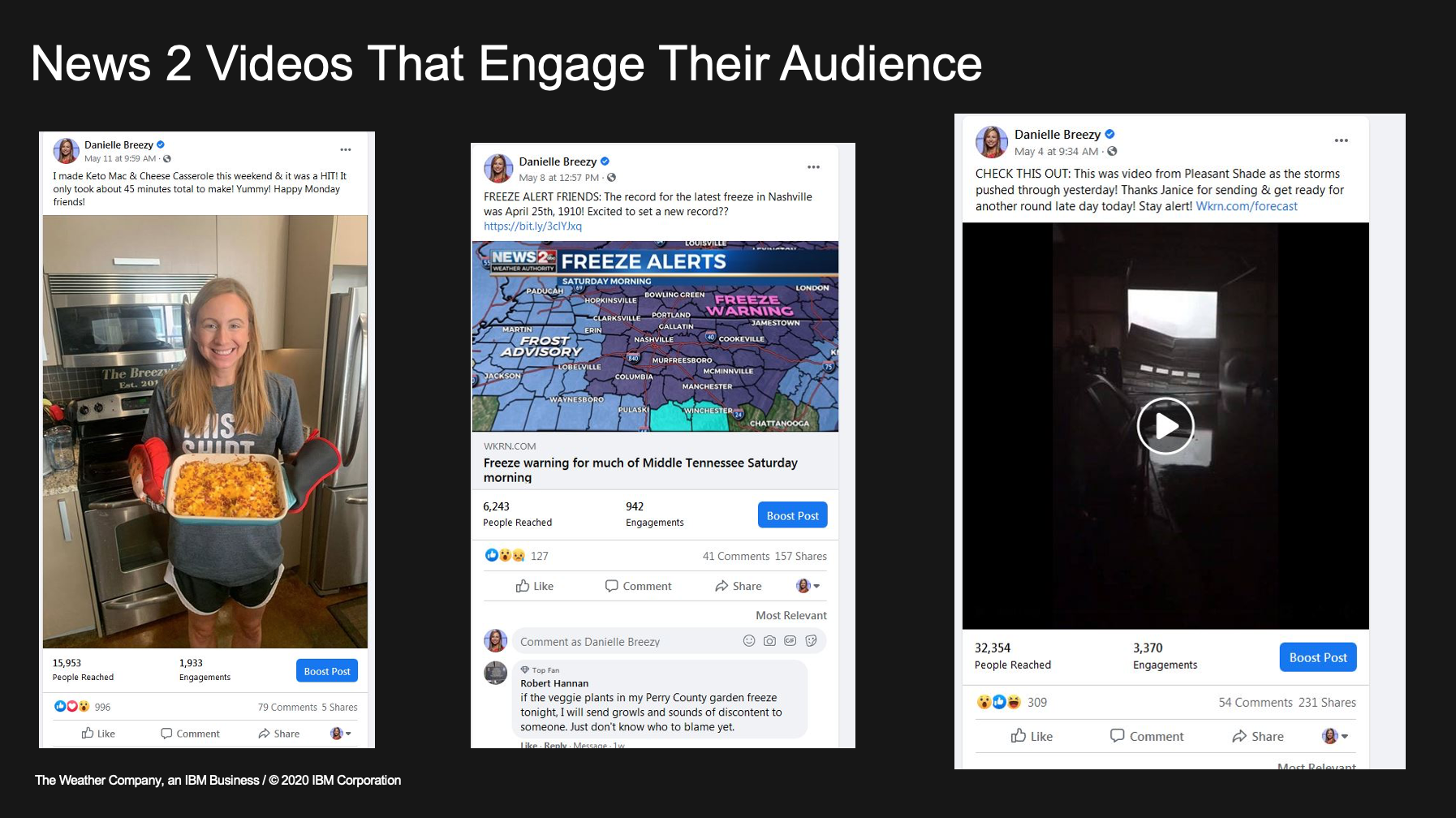 She also injected more personalized, quarantine content into her Facebook fan page: photos of puzzles she’d completed at home, meals cooked with new recipes, and fresh face coverings.  Breezy revealed that she generated such posts to make “the viewers realize you’re one of them. You are going through it just like they’re going through it.”

“People really got attached to it; it creates a dialogue, and it creates a way for people to communicate,” Breezy continued. “And I thought [it] was a great way for people to see me personally, too, not just as the weather person keeping them safe, but there’s also the fun things that we’re doing together to kind of pass the time away as we’re all safer at home.”

An Audience-Centric Approach to the News

This approach is a social media manifestation of perhaps the biggest reason young viewers tune in to local stations. SmithGeiger co-founder Seth Geiger recently told TVNewsCheck that young people respond to an audience-centric stance on the part of local TV news, where broadcasters go “beyond reporting and extending into solutions and looking out for you.”

Eubank and Breezy said mindfulness about the number of posts beamed across social media is important — too many could overwhelm followers, while too few could prove less than effective. Depending upon the type of posts and the messaging therein, both said that 6 to 10 per day feels like a reasonable range.

When there’s extreme weather, however, such concerns might rightfully be ignored. Breezy discussed a severe-weather scare that occurred locally on Easter Sunday, which included tornado possibilities. With people still sheltering-in due to COVID-19, Breezy fell back on the tried-and-true approach of posting heavily on social media before, during, and after the event rolled through the area.

“You want to make the viewer know that you’re with them before it happened, so they’re informed, they know what to do, they know when they need to get ready to be safe during the actual event,” Breezy said, “and then after, you want to tell them, ‘Hey, it’s OK now; you can let your guard down, you’re safe.’”

Automation and the Race to be Everywhere

On Easter in Tennessee, and during any emergency scenario where lives are on the line, every second counts. With that in mind, Breezy said she relies on The Weather Company’s automated cross-platform messaging solution, Max Engage which allows her to deliver real-time data to her market quickly and accurately. 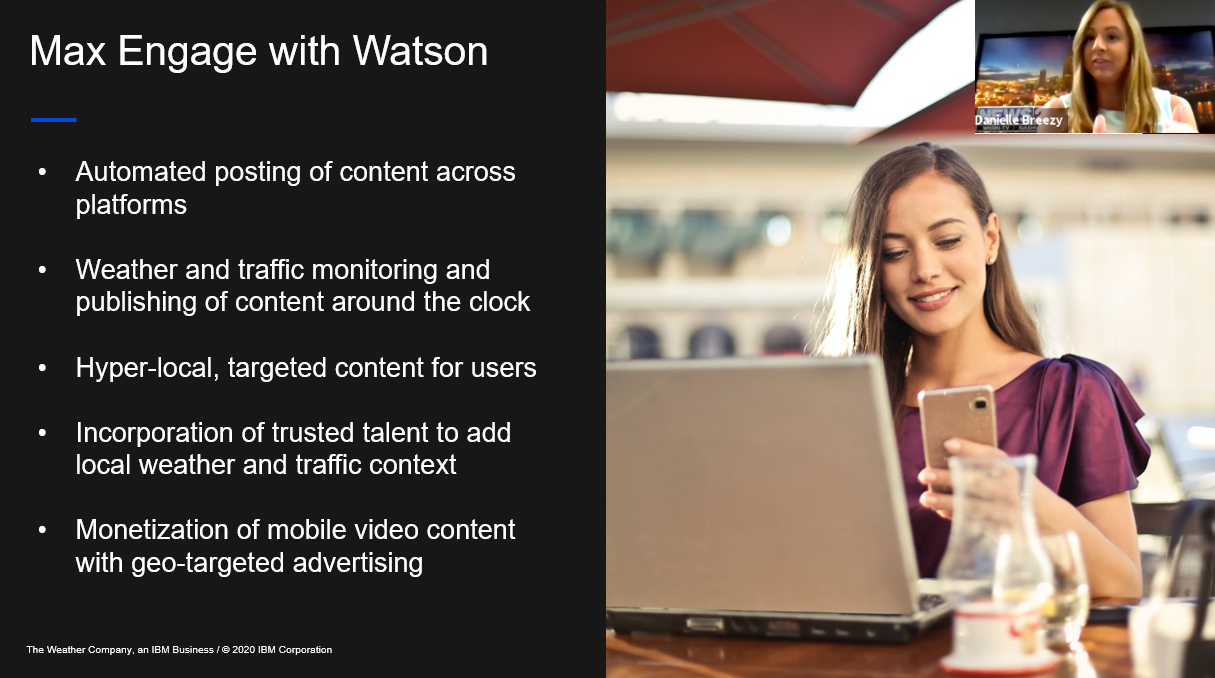 “When it comes to severe weather and being first on the air, and being on every platform,” Breezy said, “Max Engage is such a useful tool to help with that.”

Max Engage automatically creates hyper-local video content using a “rich triggering mechanism,” Thompson said. The content is then sent off to impacted users across various platforms, anytime of day. Breezy said thanks to Max Engage her followers, many of whom are in young demographics, seem to believe she never sleeps. 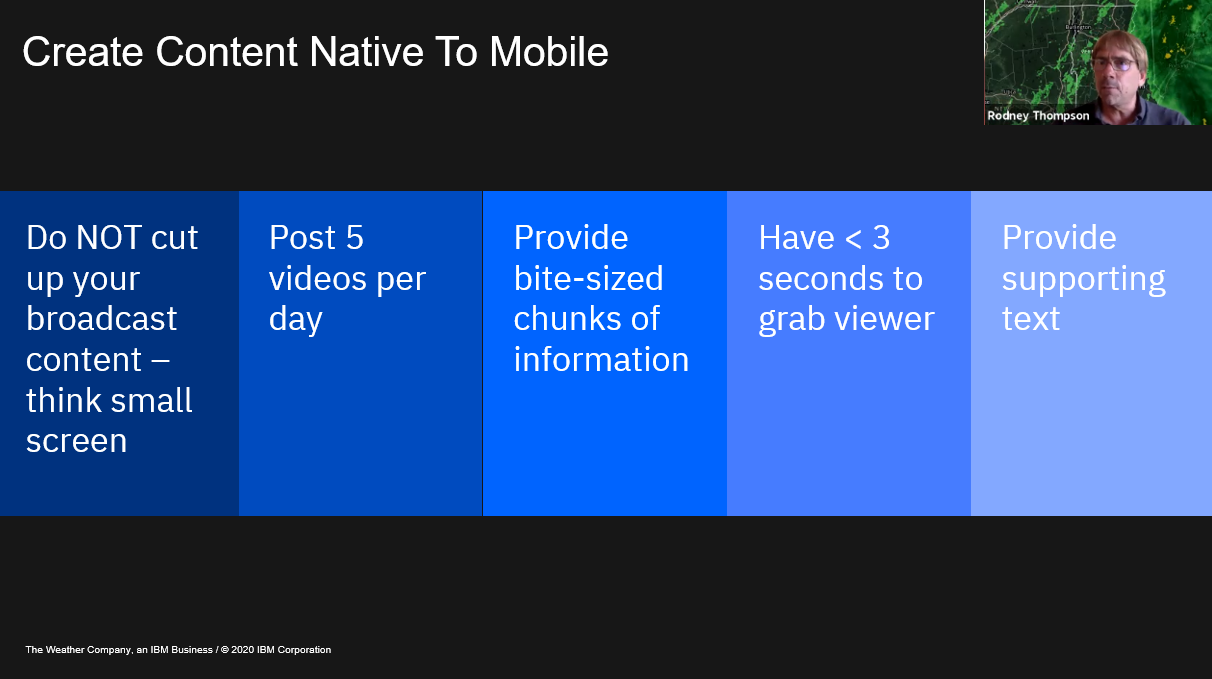 The platform also provides up-to-the-second weather data — it works with traffic, too — and sends app users vital alerts during emergencies. The notifications might reveal to viewers that Breezy’s broadcasting on Facebook Live with real-time updates, or that she’s jumped back on-air when something particularly significant calls for her to switch platforms. This came in handy during that Easter Sunday tornado warning.

“We’d been with them every step of the way, and I think that’s so important,” Breezy said. “That really gains viewership and trust.”

Eubank spoke of how broadcasting out of Salt Lake City — the largest DMA in the country, according to Nielsen — means he must inform people across parts of five different states with extremely varying weather.

“Our audience 300 miles to the south could care less about what’s going on with snow in the [northern] mountains; they all moved away … so they didn’t have to deal with that,” Eubank said.

Among the other features, Max Engage makes geotargeting seamless, helping him get the correct weather updates to followers throughout the region, no matter how varied.

“We really have an opportunity to zoom in our audience, deliver them targeted content, and they absolutely love it,” Eubank said of the Max Engage platform. “That gives us a huge advantage over other methods of technology that are just like a fire hose — you just spray [information] everywhere.”

Monetizing Mobile in a Football Stadium

On their mobile app, KSL-TV targets weather alerts to high school football fans, updating game goers as to what they can expect on their way to the stadium, and what the weather will be during the game and on their trip home afterward. Weather data appears on video screens in the stadium during games, while generating revenue streams via app-only deals to relevant vendors, such as team apparel stores and stadium concession stands.

Eubank characterized this technology-infused, customized strategy as “critical” to KSL-TV’s mission and endurance.

The Power of Video

When it comes to outreach possibilities, the Max Engage results on the video front have been so strong they even surprised Thompson and other IBM team members as they put the platform to work. Thompson highlighted case studies in which stations generating an average of 3,500 to 5,000 monthly video views started using Engage and within a single month, saw views skyrocketing to 60,000 to 80,000. 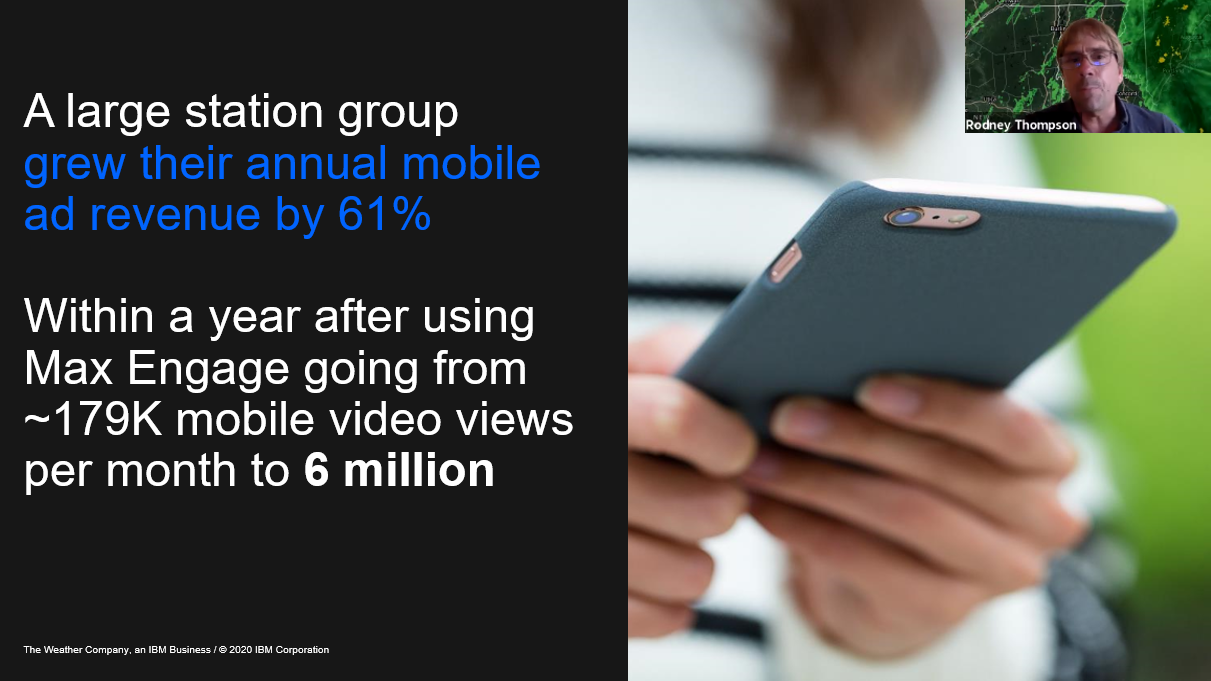 Such figures reflect proof of what Thompson calls “pent-up demand” for quality digital content, available especially on mobile devices, which can easily be exploited with push notifications, particularly in the weather news stratosphere. He cited an IBM study from August 2019 that showed 79% of people find weather push alerts useful, and says market research indicates users respond favorably to up to four push notifications per day. That data bucked previous perceptions that more than one or two non-emergency push notifications would be excessive.

Thompson concluded the webinar by introducing their brand-new product called Weather InSight which is also geared towards using weather to engage audiences young and old on mobile. Weather InSight applies AI technology to create a mobile weather experience that is relevant, understandable and catered to users’ specific interests. Every time someone launches a station’s app, Weather InSight gathers highly localized content to deliver a dynamic, personalized weather tour. Stations can now take advantage of a no-cost trial to see this product in action.

Eubank’s parting words advised local TV news stations to take action today, and engage with young viewers through digital means, using the best technology available to them. “This is a time to move onward, not a time to retreat. This is a great chance to use the tools, and innovate, to do things better moving forward.” The time is now.