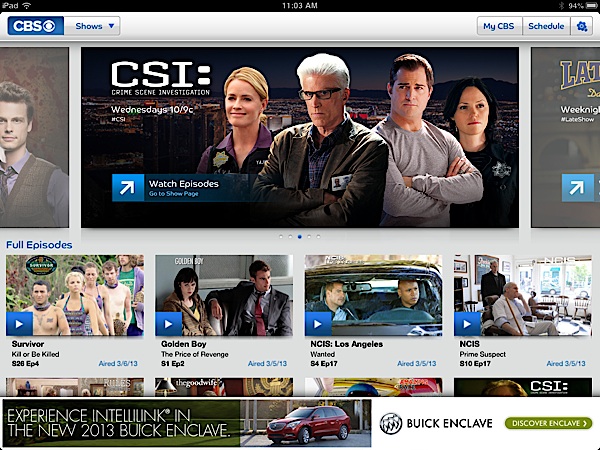 The new iPad and iPhone apps offer the network’s primetime programming eight days after broadcast; daytime and latenight programming the day after broadcast. CBS plans to expand to all major mobile and tablet platforms later this year.

CBS is the last of major networks to release a smartphone and tablet app that offers full episode streaming of its network programming, bringing shows like Survivor, The Late Show with David Letterman and How I Met Your Mother on-demand to the iPhone and iPad.

The CBS App is immediately available for free from the iTunes App Store for iPhone and iPad, with an Android and Windows 8 release coming later this year.

Full episodes of daytime and late night programming are available within 24 hours after initial airing, while most primetime programs become available on the eighth day after broadcast.

“We have been methodically and strategically finding new ways to satiate the appetite for our content on new platforms, while tapping into the tremendous revenue provided by doing so,” said Leslie Moonves, president-CEO, CBS Corp., in a statement. “Our announcement today achieves both of these objectives, while protecting our very healthy current ecosystem.  In addition, by making our shows available on all the leading mobile devices out there, we are confident we will bring a whole new set of viewers to the CBS Television Network and build upon our standing as the No. 1 network in the business.”

The new CBS App will integrate the existing CBS Connect app experience by the start of the fall TV season. At that time, the CBS App will offer: integrated social feeds; live events that allow fans to engage directly with talent; and second-screen experiences synched to the broadcast with additional content for select shows including CSI: Crime Scene Investigation, Criminal Minds, Hawaii Five-O and NCIS: Los Angeles.

CBS now joins its competitors ABC, NBC, Fox and PBS in having an app that allows viewers to watch full episodes of network programming. ABC released their app in April 2010; PBS in October 2012; NBC in June 2011; and Fox in October 2012.

For now, CBS will be able to measure only the number of times its app has been downloaded — not how many people are watching or for how long, says CBS spokesman Dana McClintock.

TVNewsCheck reported last month that CBS is testing a new streaming service with its duopolies in New York (WCBS and WLNY) and Los Angeles (KCBS and KCAL) to stream a live signal using an app called Syncbak, which restricts reception to mobile devices within the stations’ markets. McClintock says the official CBS App is a separate strategy.

“This is more akin to what we already offer on CBS.com,” he says. “Now we’re making it available on the iOS platform.”

Buick is the official launch partner for the new CBS app, bringing users CBS programming with reduced commercial interruption for the first several weeks after launch.

For once, the cliche fits: Game-changer.

It’s good to see networks taking part in the mobile world. When I first started using DISH Anywhere, I was amazed at the fact that I could watch any of my live channels, all of my DVR recordings, and I was still had access to my social sites all on my phone. Nowadays it’s tough to have the time to stay home to watch TV, and for me personally, I spend more time in airports and hotels since my job at DISH requires a lot of travelling.