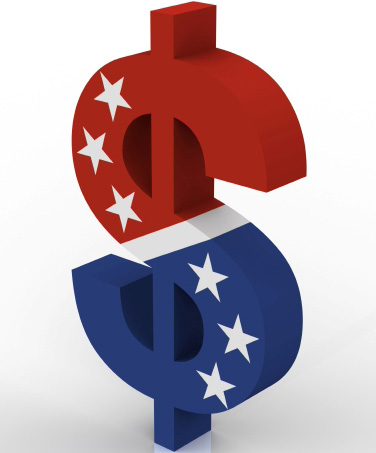 News will always be the first choice of political advertisers because they know they can reach more likely voters there. But when the dollars begin flooding in next year, experts say, more will be going into non-news programming because news inventory will be tapped out and because some advertisers want to target certain types of voters.

Political advertisers generally prefer to air spots in local newscasts because they draw a lot of likely voters, but, according to the experts, the majority of their spots — around 60% — in recent years actually end up in entertainment and sports programming.

And that imbalance may get worse in 2012, when demand for political advertising is expected to set hit new highs, thanks in large part to changes in the law that have spawned a new breed of political advertiser, the super political action committee or super PAC.

What isn’t changing is the political advertisers interest in buying time on TV stations. Even when they buy network primetime shows or sports, they are buying the stations’ local inventory in the programming.

Senate and gubernatorial candidates and their supporters are interested only in blanketing states with their ads. For House members, a single market may do.

Because of the electoral college, even “national” presidential campaigns end up spending most of their money in a dozen or so “battleground” states.

Fueling that record spending will be 33 Senate races and 11 gubernatorial races on top of what could be a down-to-the-wire presidential contest.

Also expected to spend big are the growing number of super PACS, which may accept contributions from businesses, unions and individuals and spend it in support of a candidate as long as they don’t coordinate their activities with the candidate.

“There are no spending limits on the super PACs so they will be much more willing to spend ad dollars on bigger ticket shows like live sports and primetime programming,” says one TV executive who oversees advertising sales at several major market TV stations.

“News will always be the first place they go because they know they can reach more likely voters there, but when all this new super PAC money starts rolling in they will have to find somewhere else to spend it.”

National Media is the political media buying agency that bought campaign advertising for George W. Bush’s presidential campaigns in 2000 and 2004. Will Feltus, VP for research at the firm, says campaign spenders have had to find programming alternatives because the rating points in newscasts have diminished.

“Since 1996, we found that ratings for local early and evening news have dropped 50%,” he says.

Feltus does not dismiss the relevance and importance of running spots in news, but, he says, campaigns can no longer limit themselves to it. If they do, they risk missing a significant numbers of potential voters. Other kinds of programming afford opportunities to reach other kinds of voters.

With data from Kantar Media and MRI, Feltus has studied where political advertisers placed their non-news ads as well as the correlation between shows and the voting patterns of their viewers.

According to the research, he says, the best places outside of news to reach Republican voters are TV sports — particularly college football, golf and NASCAR — along with select primetime shows.

To get to Democrats, candidates can turn to daytime and latenight programming. They, too, have their primetime favorites.

Some of Feltus’s other findings:

According to Goldstein, there is little stations can do to solicit ads or direct where they go. “So much depends on local ratings and audience demographics.”

But one thing stations can do to maximize their political revenue is to make sure their handling of ads is as flawlessly as possible, says TVB’s Jack Poor. “Political ad buys are all coming in at the last minute,” he says. “So stations need to make sure they are trafficked onto the air properly. Within each market, political ad buyers will go with the stations that execute best.”

Feltus says that although the law requires stations to give federal candidates the established lowest ad rate, they do not have extend their benefit to the super PACs. So super PAC advertising can be more profitable and easier to schedule.

“Local stations can ration their news inventory,” Feltus says. “PAC campaigns pay a premium issue rate, higher than the candidate rate, so stations will have less of a problem in clearing spots.”

I think it is a NATIONAL DISGRACE the way the Candidates spend BILLIONS OF DOLLARS to SLANDER each other over the airwaves in their attempts to sway my vote. That same money could be better used to create jobs that will place people back to work, and enable to put roofs over their heads, food on their tables and clothes on their backs. I read these candidates will spend more money on Political Advertising than this Country will spend on the Space Program.

PS. from 8:00 AM to 9:00 PM my Phone Answering Maching will be SHUT OFF, and I will rely on Caller ID to determine if I will pick up the phone or not. (Strange Numbers or “Blocked” Numbers WILL NOT be answered.

You can run, but you can’t hide.

As for me, I am rather conflicted about this. On the one hand I agree that degree to which politics is money driven is not necessarily in the country’s best interest. I also agree that the content of political advertising has almost become a parody of itself. Driven by hyperbolic claims and over-the-top attacks, the writers on comedy and satire shows would have a hard time matching the absurdity of most of the spots. On the other hand, all that revenue going to the stations means they may have a little money to spend on the equipment and software I sell to sthem. Which in turn gives me a little money to pump into my local economy. So the money spent doesn’t just disappear, there may be some extraneous good it creates. At some basic level it is politics creating jobs, even if it is a traffic assistant or a master control operator or a video equipment salesman.