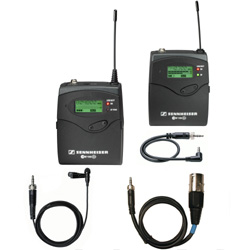 If the professional audio industry doesn’t get its way heading into the FCC’s incentive auction and channel repack, wireless microphones that TV reporters use for ENG could be in jeopardy.

“Wireless microphones in the field today are crucial,” says Joe Snelson, VP of engineering at Meredith Local Media Group, and president of the Society of Broadcast Engineers. “Wherever a reporter wants to go, with a wireless microphone they have that flexibility.

“And if a major story breaks and all the local crews are on scene, and maybe the networks, you suddenly realize that channels for wireless microphones run out pretty quickly.”

The mics now use two 6 MHz channels in the TV band that have been set aside in each market for them. The channels are so-called white space that cannot be used for TV without causing interference with other TV stations.

But the pro audio industry and broadcasters fear the channels will disappear as the FCC tries to make as much TV spectrum as possible available for sale to wireless broadband carriers and repacks the TV band. The auction could occur in 2015 or 2016.

“The incentive auction portends to put some sand in the gears of everything we have today,” says Mark Brunner, senior director of global brand management at Shure, a wireless mic vendor.

“The worst situation would be that we would lose all access to TV band spectrum,” says Joe Ciaudelli, director of spectrum affairs at Sennheiser. “Wireless microphones have unique performance requirements that require TV band spectrum. If we don’t have access to that, there has to be some incredible compromises.”

The Super Bowl uses more than 1,000 wireless devices throughout the entire production, says Ciaudelli. And those devices have to be carefully coordinated to share spectrum in the most efficient manner.

One technical fix would be to go lower in frequency, below the 600 MHz band, but bigger antennas would be required, Ciaudelli says. If the industry opts to go to a higher frequency, wireless microphones would lose range and require more power and bigger batteries.

“This is the balancing act we’re trying to figure out,” he says. “Were not sitting on our hands. We’re constantly innovating and we’re making product that allows packing a denser number of mics within a smaller sliver of spectrum.”

The rule of thumb today, according to Ciaudelli and Brunner, is that eight wireless microphones can operate within a single TV channel. But recent developments are boosting that number to 12, they say.

Hopes for wireless mics do not rest solely on technology.

“Broadcaster participation is the fuel for the fire,” Brunner says. “If they come in droves to sell their spectrum, it’s going to be a worse outcome for pro audio. If participation is modest, the impact on the TV band will be lessened.”

Meanwhile, Rep. Bobby Rush (D-Ill.) has introduced legislation that that would maintain the two safe haven channels for wireless mics in each market and extend other protections to the devices.

“Important uses of wireless microphones and their economic and social impacts and effects should certainly be taken into account just as much as other spectrum needs in large urban markets where available spectrum is limited,” Rush wrote in a co-sponsor invitation letter.

In a letter of support for Rush’s efforts, NAB President Gordon Smith said the wireless microphone was “a vital component” of the local service broadcasters provide.

“Without safe haven protections for these operations, broadcasters may not be able to provide on-the-scene coverage of breaking news, emergency information, political events and other time-sensitive situations,” the letter said.

Broadcasters are also looking to the FCC for relief at the FCC.

In August, Sinclair Broadcast Group, CBS, Fox, ABC and 23 others co-signed a letter to FCC Interim Chairwomen Mignon Clyburn, urging the commission to preserve the two channels set aside for wireless microphone use in each market. The broadcasters pointed to major events such as Superstorm Sandy and the Boston Marathon bombings as examples of fast-developing news stories that relied on wireless microphones.

“But make no mistake, this information only gets to Americans — on all of their myriad of broadcast and broadband devices — because of the marvels of wireless microphones.

“These devices — typically operating at just 50 milliwatts and utilizing just a sliver of precious spectrum — serve a central, but underappreciated function in the dissemination of news and information.”

While most broadcasters recognize the importance of the wireless microphone issue, some say it’s the least of their worries when it comes to the incentive auction.

“There are a lot of bigger fish to fry,” says Andy Suk, VP engineering at Cordillera Communications. “Wireless mics will find a spot after the channels are repacked, but will stations to have to find a new channel? That’s a much bigger issue.”

This is Part 2 of a three-part special report. Part 1 appeared yesterday and Part 3 will appear Thursday. Read the complete series here.